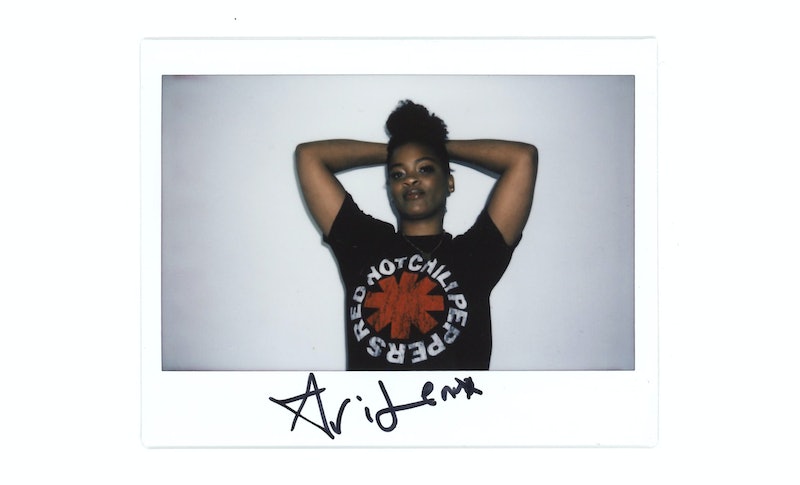 When celebrities hang out at Bustle, we want to give them the chance to leave their mark. Literally. So we hand them a pen, a piece of paper, a few questions, and ask them to get creative. This time singer-songwriter Ari Lennox is leaving her mark in the Bustle Booth.

Back then, Lennox was a struggling artist working at a public storage warehouse, contemplating giving up on music and instead settling for a more stable life. But then she got a call from Omen — a friend and rapper she had collaborated with in the past — insisting that she fly out for a studio session with none other than the Grammy-nominated musician J. Cole. It was a once-in-a-lifetime opportunity, but Lennox, terrified of flying, nearly didn't take it.

“My logic was never quite good,” she tells Bustle now, sitting down at our New York office recently. “I really sometimes let fear eat me up.”

It took a few drinks, but Lennox managed to swallow her fear long enough to get to California. She remembers the pressure of that first studio session, which was essentially an audition for Cole’s Dreamville Records. “It was nerve-wracking but I was determined to show off. I wanted to make sure Cole knew I was good,” she recalls.

The artist was obviously impressed; shortly after, he signed Lennox to Dreamville Records as the company's first (and currently only) female artist. Lennox immediately knew it was the right decision, describing the atmosphere at Dreamville as like family. “It's just something about having a whole bunch of brothers,” she says of Cole, Omen, and the other Dreamville members. “I feel spoiled. I feel like a baby sis, I feel so much love… They're constantly strengthening me.”

The Dreamville team have been crucial mentors in developing her sound, in particular; Lennox credits Cole and Omen’s love for R&B legend Aaliyah as a shaping force for the songs on Shea Butter Baby. “I know [Cole] was looking for a certain type of girl to sign, and I knew I didn't really have that flavor yet. My music didn't really exude Aaliyah yet,” she explains. Now, her music — especially her song "Break Me Off" — has grown to have “more Aaliyah vibes", she says.

It may have her taken three years to complete Shea Butter Baby, but Lennox is happy to have waited, as the past few years have been crucial for her both musically and personally. “I got so many tips on being more brave about... owning my decisions,” she says. Her new courage has extended beyond music, too; she proudly boasts she can fly on airplanes now, no alcohol necessary.

Lennox describes her album as “frank, soulful, and shocking”, but she might as well add “bold,” too. For more on the artist, check out her Bustle Booth below.

More like this
On 'The Handmaid’s Tale,' Christine Ko Fights Back
By Gretchen Smail
'Grey's Anatomy's New Intern Got Advice From Dr. Bailey Herself
By Grace Wehniainen
Everything To Know About Taylor Swift’s 10th Studio Album, 'Midnights'
By Grace Wehniainen and Jake Viswanath
Is Dua Lipa Dating Trevor Noah? New Photos Show Them Kissing & Hugging
By Brian Anthony Hernandez and Martha Sorren
Get Even More From Bustle — Sign Up For The Newsletter