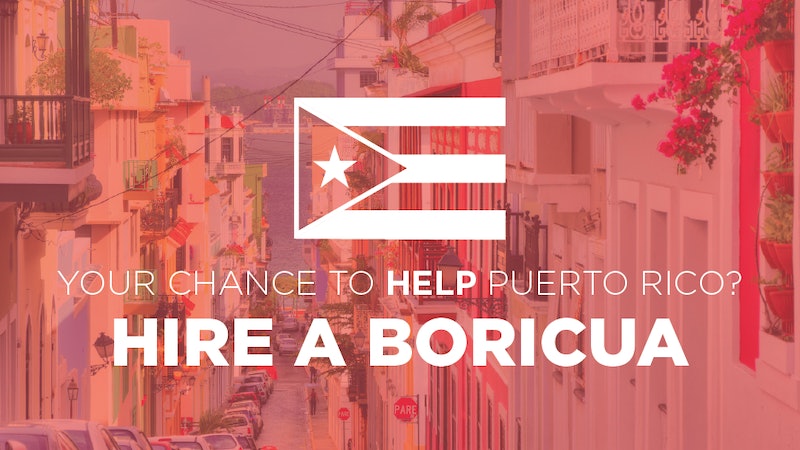 This year, it’s time to skip the ridiculously long Black Friday lines, and invest your money somewhere it'll be put to good use. Shop and Hire Puerto Rico connects Puerto Rican makers with U.S. shoppers and employers — just in time for the holidays. On Nov. 20, The Puerto Rico Science, Technology & Research Trust launched the initiative to help the island’s citizens and economy following the environmental, personal, and economic devastation caused during the hurricane season. It was released under Colmena66, a vertical of the research trust. The website exclusively features products from Puerto Rican artisans, entrepreneurs, and small business owners. Denisse Rodriguez, the director of Colmena66, tells Bustle the goal of the project is "to boost economic development," as well as "implement the start of the e-commerce culture in Puerto Rico."

The top categories of shopping on Shop and Hire Puerto Rico are handmade apparel, baked goods, handmade body creams and bear oils, coffee, and home decor. Not only is Shop and Hire Puerto Rico offering handmade goodies (which would make great presents for literally anyone on your list), but the site also has a categories for freelance work. Online shoppers can find graphic designers, website developers, web programmers, email marketers, and accountants to meet their tech and design needs. Through campaigning and partnering with organizations such as Brands of Puerto Rico, Rodriguez found many of the freelancers and artisans featured on Shop and Hire Puerto Rico. Rodriguez explains Shop & Hire Puerto Rico "gives the U.S. audience an opportunity to directly help the Puerto Rican economy. By shopping from one of our local brands or by hiring local talent, you are literally putting food on the table for these individuals."

Shop and Hire Puerto Rico was not only created to help connect Puerto Rican artisans to the U.S. mainland market, but to also rebuild the local community. "Puerto Rico was facing an economic crisis before Hurricane Maria, so our makers and freelancers were already struggling. After Hurricane Maria the crisis scaled, and the urgency increased," says Rodriguez. After Hurricane Maria made landfall on Puerto Rico on Sept. 20, the island was desvastated by the Category 5 storm. The hurricane led to massive, island-wide power outages, an influx of refugees moving to the states, and a shortage of food and water. As of Nov. 15, The New York Times reported, “Manuel A. Laboy Rivera, the secretary of Puerto Rico’s Department of Economic Development and Commerce estimated the economic losses at a minimum of $20 billion, although some economists and analysts put it as high as $40 billion, much of it from the drop in productivity.” Additionally, some Puerto Ricans are still trying to find adequate food, water, and shelter. By shopping on Shop and Hire Puerto Rico, you can help positively impact the long-term (and short-term) rebuilding process Puerto Rican citizens have been faced with.

A 2017 poll revealed nearly half of mainland Americans did not realize Puerto Ricans were fellow citizens, which could negatively impact the island’s economy. Though Puerto Rico is part of the United States, the island territory has been treated unfairly in face of natural disasters when compared to the treatment and aid afforded to mainland states. Just a few weeks after Trump expressed unwavering support for Houston citizens who were devastated by Hurricane Harvey, he entered into an online fight with San Juan Mayor, Carmen Yulín Cruz‏, who has been working non-stop for citizens all across the island. Through Shop and Hire Puerto Rico, Rodriguez and those at The Puerto Rico Science, Technology and Research Trust aim to give Puerto Rican entrepreneurs the opportunity to become more connected and successful within the market on the mainland United States.

If you don’t like to shop on Black Friday, you can still support the initiative: the Shop and Hire Puerto Rico website will be ongoing throughout the holiday season, and will carry into the new year. "Puerto Ricans have always been characterized by their talent, creativity, and hard-working culture," Rodriguez tells Bustle. "Let’s give Puerto Rico the opportunity to show the world what we are made of."

Shop and Hire Puerto Rico has a ton of cool AF items, and could be your one-and-done stop for all your gift shopping. It is the perfect way to give back to those in need this holiday season, and to support Puerto Ricans who have been affected by Hurricane Maria.