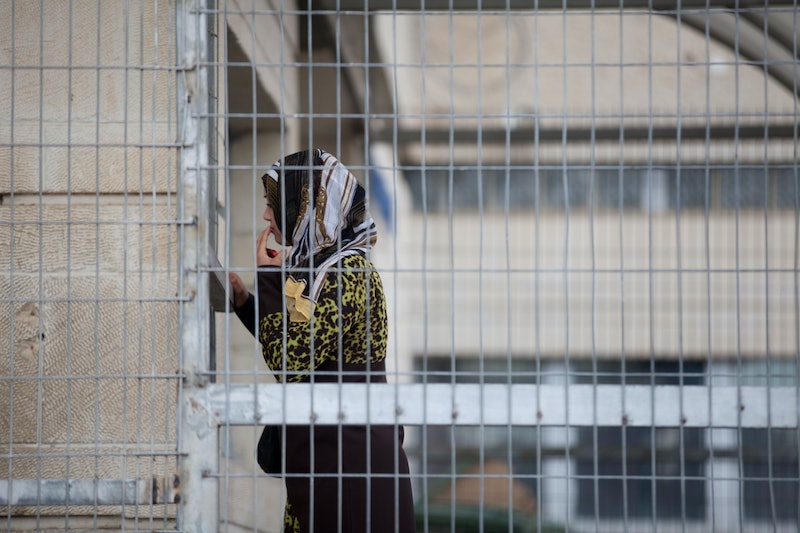 Over the course of 2017, prison reform has become a feminist issue — especially when women make up the fastest-growing population of incarcerated people, according to the Marshall Project. A new study from the UK shows that a quarter of all women who were incarcerated in 2016 were sentenced to less than 30 days, and a third of that group were out in a week or less, Independent reported. And that's given rise to a conversation about the value of short periods of incarceration at all — particularly considering just how much short term incarceration hurts women.

The problem is that women are more likely than men to be caregivers for children and other family members, and even a week of custodial sentencing for minor offenses can negatively impact their entire families and support systems, creating conditions that exacerbate disadvantages and encourage re-offending. 70 percent of all female prisoners in British jails are incarcerated for six months or less and have been sentenced for non-violent crimes. Activists are arguing that short-term incarceration does more harm than good for women in particular, and that short prison sentences need to be rethought entirely. "A few weeks in prison are enough to lose your home, children and job and cause harm to mental health," Kate Paradine, the chief executive of Women in Prison, a UK-based group aiming to half the number of incarcerated women by 2020, told Independent.

Though this study focused on the British carceral system, this is particularly relevant to the American criminal justice system; 8 in 10 of all women incarcerated in the U.S. are mothers, and 7 out of 10 have minor children, according to statistics from the Department of Justice. And studies have been done showing just how badly short periods of incarceration can harm everybody involved. One study in 2015 found that only 5 percent of children whose mothers were incarcerated for periods under a month remained in their own homes. Another study in 2017 found that mothers incarcerated for small amounts of time were likely to lose their homes, enter cycles of poverty and dependence, suffer mental health issues, and note severe trauma in their kids.

It's a problem that's getting worse rather than better in American prisons. The American Civil Liberties Union notes that the proportion of women incarcerated in state, federal, and local prisons across the US has ballooned since 1980, increasing by eight times. (A huge proportion of those women are being held before their trial has been conducted, as well.) The issue also disproportionately affects incarcerated women of color. According to statistics released in 2012, Black women aged 18 to 19 were three times more likely than white women to be incarcerated; once they hit the ages of 25 to 39, the race gap narrowed, but Black women were still just under twice as likely to serve a sentence. Rates of incarceration for Black women are gradually decreasing, according to the Sentencing Project, but Black women continue to be incarcerated at higher rates. This means that Black children, as the ACLU puts it, "disproportionately suffer" when their caregivers are given a custodial sentence, even for a short amount of time.

Women are likely to get shorter custodial sentences than men in the U.S. in general, but that isn't necessarily a good thing. Studies show that short incarceration periods seem to make people more likely to re-offend, increase prison overcrowding, and often become patterns that can interrupt both employability and treatment for substance disorder issues, among other things. And when you add in the disruption caused to women and the people they care for, the idea of short periods of incarceration for minor crimes doesn't seem 'lenient' at all.

Society's over-reliance on women to be the primary caregivers and helpers for those around them means that they're particularly vulnerable. Whether this conversation about short custodial sentences and their destructive effects actually changes anything remains to be seen — but it badly needs to be part of the cultural conversation around women and incarceration.