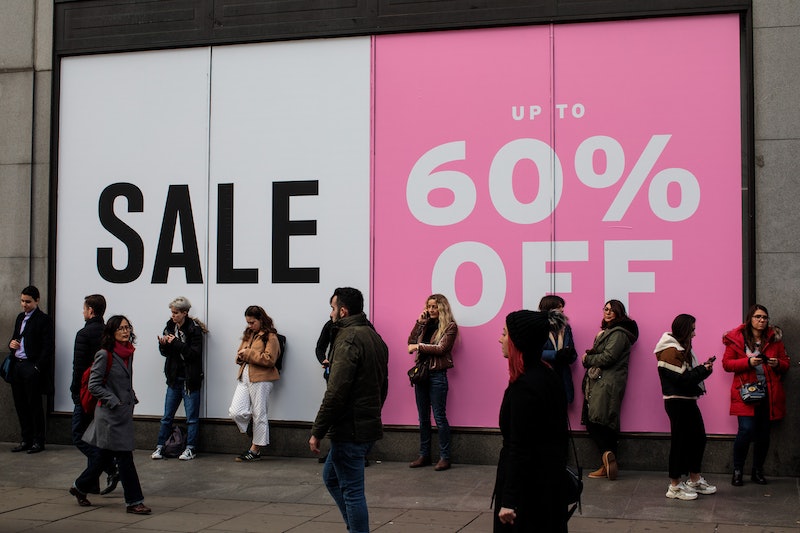 Nov. 29 marks Black Friday. Transported from the U.S., the UK version has quickly become a frantic period of sales characterised by a hectic dash for deals, deplorable consumer behaviour, and a need to buy more, more, more. But with increasing awareness of how human consumption is harming the planet, is there a place for such large scale shopping events anymore? Should Black Friday come to an end?

As the BBC reports, Black Friday's name comes from its association with retailers moving "into the black" i.e. they finally turn a profit. So it's no wonder that a 2018 PricewaterhouseCoopers report found over three quarters of retailers participate in the sale.

But, slowly, a Black Friday backlash is emerging. Some brands, though few in number, are boycotting the sale and asking customers to do the same. The underlying message is: buy less, not more. So I spoke to some experts to try and determine whether Black Friday and its Cyber Monday sister sale could ever have a sustainable future.

Unsurprisingly, every single person I spoke to felt negatively about the frantic buying Black Friday promotes. The sale "stimulates overconsumption, materialism, and a work-and-spend culture," says Dr. Diana Ivanova, research fellow at the University of Leeds' Sustainability Research Institute. Not only does it worsen environmental wellbeing, she says, but human wellbeing too.

There appears to be little research into the environmental impact of Black Friday alone, but UK' shoppers £1.49 billion online spend in 2018 doesn't bode well for the planet. "Wealthy nations such as the UK have massive carbon footprints, much higher compared to the global average or the climate targets to stay within 1.5°C of global warming," notes Dr. Ivanova.

Online shopping has just as much as, if not more of, a detrimental impact. "During Black Friday and Cyber Monday, air pollution spikes, thanks to the delivery of online orders," says Diana Verde Nieto, co-founder of Positive Luxury. "In 2017, it was estimated that every 93 seconds, a diesel truck left an Amazon fulfilment centre."

When you break it down, she adds, "it’s easy to see that the footprint of these single items is much bigger than it first seems. Their journey, existence, and impact exist long before they even arrive at our doors and many of them will outlive us, ending up in our oceans or buried underground."

It's hard — almost impossible — to justify Black Friday's existence when you consider a much more important day. The "earth overshoot day, i.e. the day where humanity has used up all the resources it could use annually in a sustainable world, is earlier and earlier every year," says Kirsten Svenja Wiebe, a scientist at the independent research centre SINTEF. (This year's date was July 29.)

She also rather scarily points out that "if everyone in the world consumed as much as the average European does, we would need three to four times the global resources." Stocking up on the latest electrical goods, bargain-priced fashion, and general stuff we do not need will not make that statistic read any better. (Nor will the relentless returns of purchases. "If something is returned, its shipping impact is doubled, and that item is often unable to be resold," says Verde Nieto.)

The problem is: a lot of us know this. So why can't we stop salivating over discounts and deals? Events like Black Friday "create a sense of urgency in consumers’ minds," explains consumer psychologist Nisa Bayindir.

Phrases like "limited time and availability" and "while stocks last" use what's called the scarcity principle, she continues. "The scarcity of time, products, and special offers hit the consumers’ weak spot: the need to maximise gains and/or minimise losses."

Psychologist and founder of the Health Psychology Clinic, Joanna Konstantopoulou, says there is psychological "pleasure associated with finding a great deal." It is this, plus the fear of missing out and feelings of regret, that can drive us to buy impulsively.

As well as distracting us with discounts that go up and down at the CEO's whim, "sales are deliberately orchestrated to make people panic that they are at risk of losing out on the promise of happiness, unless they act fast," notes chartered clinical psychologist Dr. Jonathan Pointer. And even when we're aware of these "mind tricks", he says, "they will still have an effect on us" (although hopefully a "less persuasive" one).

Then there's the false economy that Black Friday and similar sales can create. As Bayindir notes, "consumers can end up spending beyond their means." The rethinking of personal buying habits is clearly in order. Realise that deals will be available at other times of year, says Konstantopoulou. And try to purchase based on necessity, rather than desire. You could also consider spending on low carbon activities such as fitness classes.

"The world needs to go to less and higher quality consumption," Wiebe states. "Higher quality here refers to products that last longer and are produced in a more sustainable way, both when it comes to environmental implications as well as the quality of jobs along global value chains."

Experts have a few final tips for shoppers who want to reduce their planetary impact. First, do your research into who you're buying from. Look for companies with green initiatives (which could include anything from recyclable packaging to carbon offsetting and certifications like the Butterfly Mark) and items that have been preloved or upcycled. When it comes to delivery, select the standard shipping option to "save on fuel emissions." Finally, consider offsetting your own purchases.

"Of course," Brewster states, "our stance would be to ban [Black Friday]." A stance everyone may need to get on board with if they're truly concerned about the future.