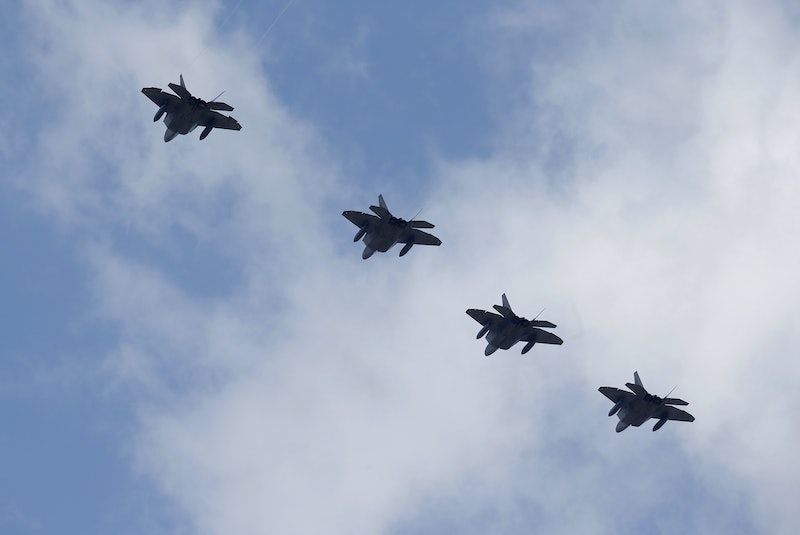 It seems these days like everything in the world is something to be afraid of — the water you drink might be contaminated with lead, the food you eat could contain deadly bacteria, the people you've known your whole life might not be who you thought they were. But if there's is one thing you should absolutely not be stressing out about, it's nuclear missiles. Sure, maybe everyone around you might be talking about it, but for the sake of your mental well-being, it's not worth worrying about nuclear war right now. The world order, thankfully, is still a long way from that happening.

The news this week of an escalation in tensions between North Korea and the United States has cast a cloud of apprehension over the country. But here's why you shouldn't stress: President Trump loves to talk a big game, but he's likely not going to attack North Korea unless provoked. There's no way to tell how serious Kim Jong-un is about his threats, but there's no real evidence to suggest that an attack is coming.

Even if North Korea does initiate a nuclear strike, it's highly unlikely you'll be affected. The country's nuclear capabilities are burgeoning, but it could be a long time before they build an arsenal that can take on the United States. That means they're limited in the number of missiles they can launch, as well as how far those missiles can travel. Major cities would be the most likely targets, but the East Coast may be out of range for the type of intercontinental ballistic missiles (ICBMs) that North Korea would use. If you're in the vast majority of the nation that either lives on the East Coast or doesn't live in a large city, your chances of being in an attack are limited.

Trump also doesn't seem likely to let an attack go without some kind of retaliation — his comments this week made that abundantly clear. "North Korea best not make any more threats to the United States. They will be met with fire and fury like the world has never seen," Trump said Tuesday to reporters at his golf property in New Jersey.

If North Korea launches a nuclear strike first, which is pretty much a political necessity for Trump if he wants to keep his job, Trump could very well retaliate with the full force of the U.S. military, and probably come close to thoroughly obliterating Pyongyang. That scenario would leave North Korea unable to scrape together a government, much less launch more missiles.

Finally, as a general note on this type of fear, there is no point in worrying about something that you can't change. Spending any emotional energy on the slim chance of nuclear war isn't going to help anyone. A much better use of your time might be fighting to get a president into office who doesn't go around poking sleeping nuclear bears.