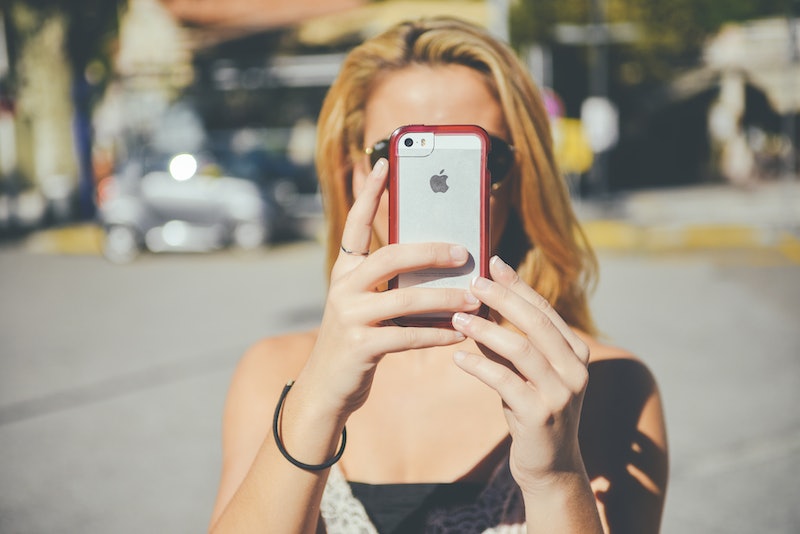 If you own a phone with a camera, you've probably taken a selfie at some point in your life. No shame in the game — whether you're just checking out your makeup, having a good hair day, or you just simply feel like taking a selfie for whatever reason, we all do it. And you know what? Sometimes you need to just let the world know that you're feeling particularly fly, and you post that selfie on social media. But how do others feel when they encounter your selfies? A recent study just examined what other people think when you take a selfie and, well, the results might make you a little self-conscious.

Researchers in Munich surveyed 238 people from Austria, Germany, and Switzerland about their opinions on selfies and their selfie-taking habits. Not that surprisingly, 77 percent of the participants said they take selfies at least once a month; 49 percent said they receive a selfie at least once a week. So it's clear that a lot of people take selfies. But even though many of us take selfies, others don't really like looking at them, according to the study. The survey found that a whopping 90 percent of participants consider other peoples' selfies to be self-promotion, even though less than half (46%) of those same participants viewed their own selfies that way!

Holy hypocrites, Batman! That's a lack of self-awareness if I've ever seen it. But it's not exactly shocking. Author Stephen M.R. Covey summed it up pretty succinctly: "We judge ourselves by our intentions and others by their behavior." There's a psychological basis for this, too — it happens when we experience cognitive dissonance, which happens when you simultaneously hold two (or more) inconsistent beliefs. Basically, cognitive dissonance makes you uncomfortable, so you perform a bunch of mental gymnastics to rationalize your thoughts and behavior i.e. "When other people take selfies it's narcissistic but when I do it it's okay because my hair just looks awesome and I'm only doing it this once," or whatever you tell yourself.

If these study results have you wanting to retire your front-facing camera for good, don't do anything drastic just yet. For one, a recent study conducted by researchers at University of California, Irvine found that taking selfies can lift your mood. Second, a survey among teens found that taking selfies boosts self-esteem. If those aren't enough of a reason to continue your selfie-taking, I don't know what is.

On a more basic level, just because some people might view them as narcissistic doesn't mean you should stop posting selfies. Especially when, as this study showed, most of those same people are also guilty of taking selfies too. So I think the moral of this study should be, as the great Kevin Gnapoor once said, "Don't let the haters stop you from doing your thang." If your "thang" is taking selfies, then take selfies.