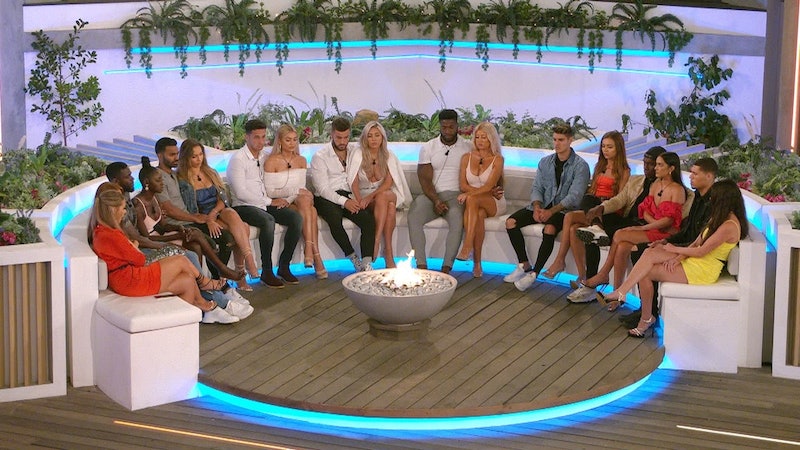 Love Island presenter Caroline Flack died on Feb. 15, her family confirmed, marking the third time the reality TV series has been hit with tragedy. (Two previous contestants died by suicide; Sophie Gradon in 2018 and Mike Thalassitis in 2019). Flack's death immediately resulted in the cancellation of two Love Island episodes and an episode of its reaction show, Aftersun. But, in the wake of the news, many are pondering the long-term future of Love Island.

A March 2019 investigation by the Sun on Sunday found that 38 people who had appeared on reality TV programmes across the globe had died in suspected suicides. In May 2019, Steve Dymond — a previous guest on The Jeremy Kyle Show — died in a suspected suicide, per ITV News, a week after filming a lie detector test that resulted in a split from his fiancée.

Dymond's death sparked fury at the exploitative nature of reality TV, eventually leading to the permanent axing of The Jeremy Kyle Show. Fully aware that more than one show was to blame for the current situation, a government inquiry was swiftly launched. Overseen by the Digital, Culture, Media, and Sport (DCMS) select committee, the inquiry investigated the duty of care broadcasters and production companies owed their contestants.

Committee chair, MP Damian Collins, said at the time: "ITV has made the right decision to permanently cancel The Jeremy Kyle Show. However, that should not be the end of the matter ... This kind of TV featuring members of the public attracts viewing figures in the millions but, in return for ratings, the broadcasters must demonstrate their duty of care to the people whose personal lives are being exposed."

An online petition calling for "Caroline's Law" has gained traction in the days following Flack's death. The petition aims to bring about greater protections for those in the public eye against "harassment" and "bullying" by the British media. As of Monday, February 17 it had over 500,000 signatures.

Last year likes of Channel 4, ITV, and the BBC were asked to give evidence along with former reality TV contestants. Love Island's Marcel Somerville and Yewande Biala detailed their experiences on the dating show in a House of Commons select committee, showing clear progression in the level of psychological support offered in more recent seasons.

Marcel, who appeared on the 2017 season, admitted there wasn't as much emphasis on welfare as Yewande, a 2019 contestant, had experienced. Although both went through more than one psychological evaluation, Yewande said a "psych" was available "on site 24/7" during her time in the villa. At lunch and dinner (two mealtimes that are never aired), welfare professionals would also visit the villa to chat to islanders, she said. "We didn't have that in our year," Marcel replied.

Yewande told the inquiry she was happy with the aftercare, noting: "They keep in contact all the time ... I think the support is really good." Marcel, again, reported less focus on mental health and wellbeing after leaving the villa. This is likely down to the increased psychological support ITV announced in May 2019 ahead of that year's series.

Per the Independent, the broadcaster announced all Love Island contestants would be given rigorous psychological and medical assessments before filming. Afterwards, islanders would be given a minimum of eight therapy sessions coupled with "proactive contact" for up to 14 months.

The inquiry, however, never came to a solid conclusion. As a result of the general election, it was closed, leaving plenty of unanswered questions. A spokesperson for the DCMS told Bustle: "It would be up to the new DCMS committee to decide whether it wanted to pick up the reality TV inquiry. That committee is still not reconvened as new members have not been appointed."

Again, nothing has been implemented. Ofcom asked experts to respond to a consultation on the proposed changes and told Bustle it continues to consider these responses.

With clear-cut rules and regulations still up in the air, some aren't sure Love Island should follow the fate of The Jeremy Kyle Show. But, although it's impossible to speculate on the reasons for any suicide, reality TV fame can be unquestionably damaging.

"The problem with shows like Love Island," says psychologist Natasha Tiwari, "is that they manufacture scenarios that lead to high emotional tension and frequent breakdowns. The contestants suffer humiliation and shame, and the suicide rates of the show would suggest that their mental wellbeing is not treated as a priority."

"Contestants are judged based on their behaviour and their appearance which can have an impact on their self-worth leading to approval-seeking behaviours," adds consulting psychologist Dr. Mara Klemich, co-author of Above The Line: Living and Leading with Heart.

Tiwari explains that going on Love Island is an addictive experience that comes with a comedown. "In this time, a contestant will both be feeling low, and also not necessarily feeling good about their time on the show, having had opportunity to watch back," she says, adding: "This inevitably leads to depression, sadness, frustration, and feelings of betrayal and loss for even the most emotionally mature and balanced contestants."

Meanwhile, "presenters are expected to be funny, relatable, and spontaneous," Dr. Klemich says. Viewers, too, can be impacted. Watching contestants suffer can lead to "painful memories" re-emerging, states Tiwari.

To combat a lack of guidance regarding adults on reality TV, the British Psychological Society (BPS) issued "practical and psychological support that should be standard for all members of the public taking part in any media productions." Not only will ITV have to reconsider its level of support once again, they will also be forced to contemplate Love Island's viability.

"I would advise the broadcaster that it is difficult to justify continuing with the series, given the awful circumstances of Caroline’s death and the previous two fatalities of contestants who have been on the series," says Isabella Sharp, deputy managing director of communications agency The Whitehouse Consultancy.

"They will come under increasing scrutiny in the media and perhaps again in parliament about the morality of continuing in the current situation," she continues. "In fact, I wouldn’t be surprised to see advertisers start to pull out in the coming days."

Sharp has some prudent advice for the channel, but does say ITV "can be robust in saying [...] the pressures experienced by celebrities clearly aren't only down to Love Island or reality television in general."

However, she would "advise them to immediately commit to an investigation (ideally if possible in conjunction with other broadcasters) to look at the link between reality series and the public pressure experienced by participants." They should also "move to set up some kind of victim support organisation to investigate wider causes of online and media harm — or ideally to work with one that already exists."

Looking at why these shows are so popular could help reduce their negative impact, Dr. Klemich advises. "Watching Love Island may trigger behaviours stemming from [viewers' long-term] insecurities," she explains, saying it's important for TV bosses to "balance it out" with programmes that focus on difficult issues and "offer practical advice and debate."

Tiwari believes that "TV bosses absolutely have to accept that they have a responsibility to consider and support the psychological wellbeing of contestants, presenters, and viewers; remembering that their contestants are more likely to be suffering insecurities, presenters are also navigating the challenges of fame and supporting contestants in this artificial environment created by the show, and the viewers whose world views will be altered by the television they’re consuming."

They also need to understand "that their responsibilities do not end the moment that a person is no longer on the TV screen. Indeed, it is once people go back to their ordinary lives when they are most at risk of all the dangers we equate with mental illness."

Bustle has contacted ITV for comment on the future of Love Island. But it will return to screens on Monday night (Feb. 17) with a tribute to Flack, per iNews. Viewers are likely to feel conflicted; all too aware that cruelty often makes for entertainment. A dating show that breaks that link? Well, that may be an impossible task.

More like this
We’ve Got A Text! Another 'Love Island' Series Is On The Way
By Darshita Goyal
5 Biggest Takeaways From Channel 4's 'Untold: Life After Love Island'
By Sophie McEvoy
Twitter Can’t Get Enough Of The Romance In 'Ekin-Su & Davide: Homecomings'
By Sophie McEvoy
Meet Jungle Runner-Up Owen Warner's Equally Handsome Brothers
By Sam Ramsden
Get The Very Best Of Bustle/UK