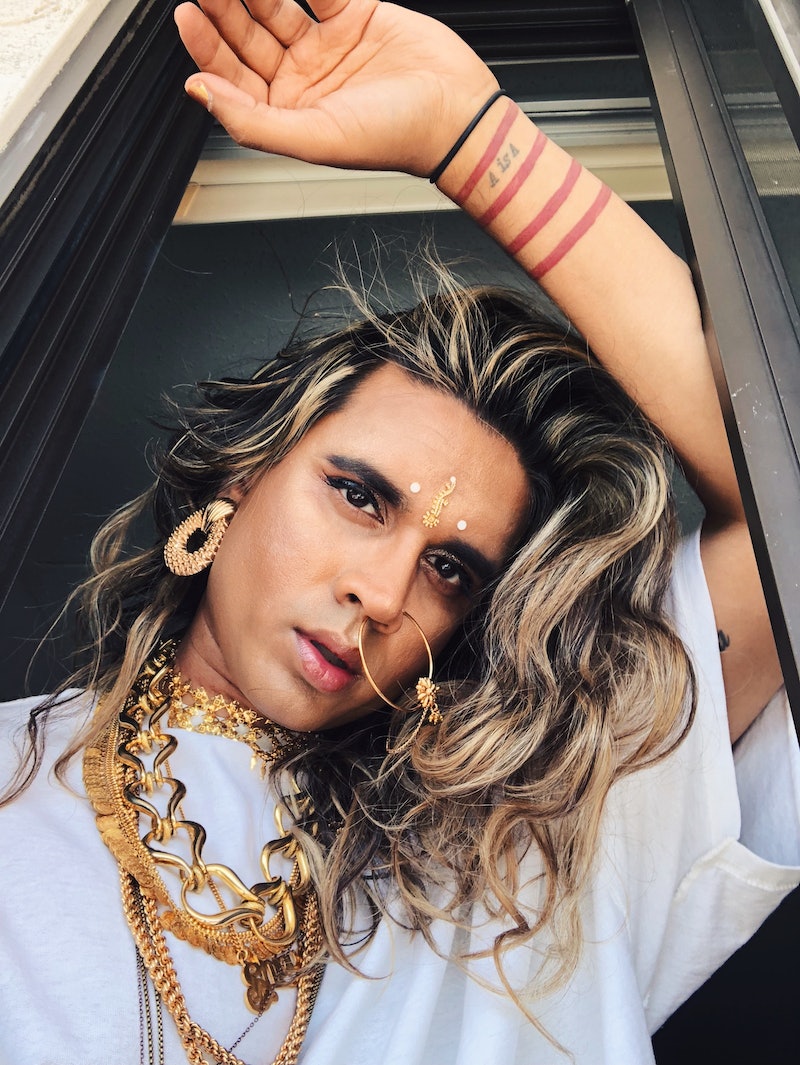 Vivek Shraya is sitting in her office at the University of Calgary when I call her on a Tuesday afternoon in November. She is an assistant professor for the school's English department — a job she's now held for just over a year. But the 37-year-old also wears many other hats: She's an accomplished author, with five published books under her belt. And Shraya's latest, titled I'm Afraid Of Men, was met with rave reviews. To top it all off, she's also an adept musician, as one-half of the group Too Attached, that has traveled across North America with Grammy-nominated duo Tegan & Sara. It's clear by speaking with Shraya, that she's an individual who exudes confidence. But she wants people to know, especially trans women, that it's OK if you're still discovering who you are well into your 30s — because that's exactly what happened to her.

Through her journey, her skin care routine, and the men's, women's, or gender-neutral products she has used, played a significant role in shaping how she felt about herself and her gender identity. While Shraya recalls first being more open about her queerness around the time she was 18 or 19 years old, she didn't believe identifying as trans was an option for her as she moved into her 20s, because of her age. She adds that she's often wondered what life would have been like had she been introduced to a community of trans women when she was younger: "I remember being 25 or whatever, and just feeling like, 'Oh, that's not an option for me anymore,'" she explains. "I felt like it was a missed opportunity."

At the time, Shraya still identified as male, and stuck to only using Clinique For Men's 3-Step program — nothing more and nothing less, aside from Old Spice body wash and Gillette razors. "There's something about your 20s where you're not thinking about the fact that you're aging," she says. "You think you're going to live forever, and ever. You don't really care."

On one occasion when she was going to pick up a fresh bottle of the Clinique toner, she says she remembers a sales associate sharing that the women's version essentially listed the same ingredients, but at a lower price point.

"I would still get the ugly gray container," she says, only because she felt pressured to "not be girly in any way."

"I definitely abided by those [male gender] rules," she adds. "Even if I was putting on the product in the privacy of my own home, I felt like it was an important assertion of my masculinity."

But 30 marked a new beginning for Shraya — she no longer felt as though she needed to conform to any imaginary rules. She realized that her identity was not just something to explore, but to embrace. And she didn't need to put a label on it. "I wasn't thinking, 'Oh, I'm coming out as trans, or I'm a woman now,'" she explains. "It was more just like, 'Well I'm 30, it's now or never.'"

Then five years later, at 35, she changed her pronouns. "Every time people called me 'he' and 'him,' it felt like an inaccurate representation of who I was," she recalls, while also asserting that gender transitions can take many forms. "I don't think that for me, there wasn't like a definitive moment where I'm like, 'This is who I am now,'" she adds. "It was all very innocuous and organic."

From then on, Shraya began to reclaim the pieces of herself she remembers letting go as a teenager — like wearing bindis, exploring different types of makeup, and being more vigilant when it comes to her skin care regimen and the products she used on her face. "Wrinkles are starting to emerge," she laughs.

Today, Shraya starts off by using Clinique's Exfoliating Scrub, followed by the T.L.C. Framboos Glycolic Night Serum by Drunk Elephant. She then applies the Stone Crop Whip Moisturizer from Eminence, and finishes off her daily routine by patting on Clarins' UV Plus Anti-Pollution Sunscreen, with Multi-Protection Broad Spectrum SPF 50, before heading out the door each day. And once or twice a week, she'll use the brand's Truly Matte Pure and Radiant Mask to keep her skin glowing.

While Drunk Elephant doesn't divide their products into men's and women's categories, Clinique, Eminence, and Clarins all offer separate lines for male customers. Yet, some beauty professionals seem to be divided when it comes to deciding whether or not products should be differentiated by the gender binary. The International Dermal Institute, a school for skin therapists that also conducts research and development for Dermalogica products, says goods should be categorized by gender, seeing as people who are assigned male at birth tend to not only develop facial hair, but their increased levels of testosterone can also lead to thicker skin and higher collagen density. Still, many professionals in the beauty industry oppose the notion that men and women need to opt for different lines, revealing that aside from fragrance, there isn't much difference between the ingredients used in the two kinds of products. And Shraya agrees, asserting that these items should ideally be seen — and marketed — as gender-neutral.

"Not even just for things like moisturizer," she says, "but even lipstick. Lipstick has no gender. There's no reason for that to be presented in a women-centered environment."

Skin care aside, Shraya is also embracing and showing off another aspect of her body that she once tried to remove through waxing: her chest hair.

"It's hard to explain, but I feel I've never loved my chest hair more than I do now as a girl," she shares. "It's exciting, and a reminder that I know that technically it doesn't meet the expectations that I'm supposed to abide by [as a woman], but I actually love how it looks and so I have chosen to own it."

That said, Shraya is open about the fact that she hasn't altered her body through surgery or used estrogen hormones during her transition, but rather created her own ideals for what being a woman looks like. "I don't pass — that's the reality," she shares. "Even when I wear makeup, or a dress, people don't necessarily see me as a woman or as a transgender woman. I have to let go of that [expectation] and try to live my life and my truth the way that it feels best for me." And in actively making that decision, she recognizes that her journey may not even be an option for others; she notes that for many trans women and girls, the lingering sense of pressure to demonstrate hyper-femininity can often feel more like a necessity rather than a choice.

"It's a matter of life and death and it's a matter of safety," she asserts. "That's not to say that doesn't apply to me, but I also recognize I have certain privileges that allow me to make different choices."

That leads to me to ask Shraya what advice she would give to women like her who should have the freedom to openly be themselves, but have to live in a world that is still terribly violent toward trans women of color specifically. "Do what you have to do to be safe, to survive, but also try to surround yourself with other trans people ... who are presenting transness in different ways," she advises. "For me, that has been my No. 1 saving grace."

She also says that for anyone who may feel isolated, finding a solid Instagram community of fellow trans people can help to shape the way you feel about expressing your gender.

"Following other trans girls, other trans-feminine people ... and seeing how they are navigating their [gender identity] gives me the confidence to explore the uniqueness of my own transness," she says. "There are so many ways to be trans."