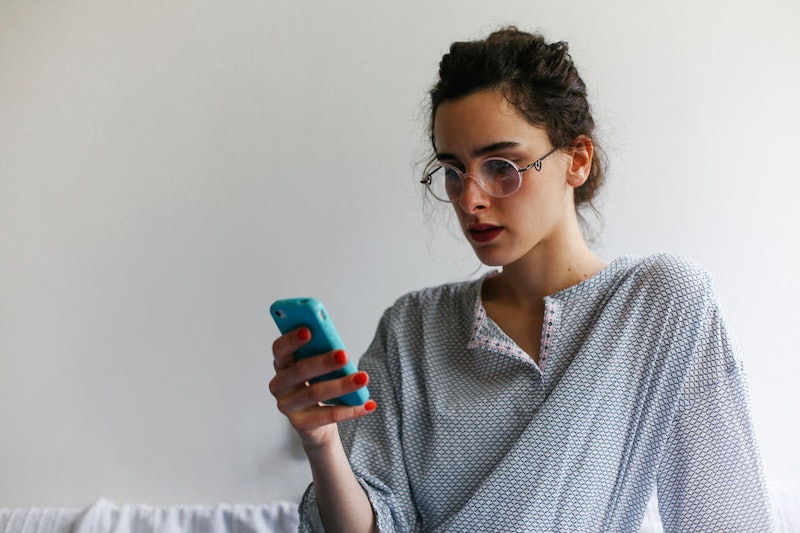 Of the many new questions that have arisen in the digital age, few are as contested as the impact of social media on mental health. Our online lives have been associated with anxiety, stress, and depression; social media has been linked to poorer self-esteem and increased isolation. Studies remain conflicted on the true influence of social media, particularly when it comes to stress — some suggest a tweet or two can help to alleviate stress, while others argue that spending time online actually causes the issue in the first place. Should you avoid social media when you're stressed, or should you keep scrolling through Instagram? Let's get a bit deeper into the debate.

To be blunt about the matter: there's arguments in favour of the "social media detox", and arguments suggesting it doesn't make any difference. Time reported on a 2017 study into social media use and anxiety in 18- to 22-year-olds, conducted by researchers from the Connecticut Children’s Medical Center. (It should be noted that stress and anxiety, though often conflated by studies, are actually distinct issues — the former's usually a "temporary experience", as Bustle explains, while the latter is a mental health issue.) According to co-author Anna Vannucci, the more the study subjects used Facebook, "the greater the association with anxiety symptoms and the greater likelihood of an anxiety disorder". She added, "We think social media use may exacerbate stress."

But here's a conflicting study: in 2015, the Pew Research Center surveyed 1,801 (specific!) adults to determine whether "the use of social media, mobile phones and the internet is associated with higher levels of stress". The findings? For men, there was "no statistical difference in stress levels" between those who use such technologies, and those who don't. But for women, the study indicated that social media could actually relieve stress. "Compared with a woman who does not use these technologies, a women who uses Twitter several times per day, sends or receives 25 emails per day, and shares two digital pictures through her mobile phone per day, scores 21% lower on our stress measure than a woman who does not use these technologies at all," the study authors observed.

Why could that be? The study doesn't offer a definitive answer, but hypothesises, "Sharing through email, sending text messages of pictures of events shortly after they happen and expressing oneself through the small snippets of activity allowed by Twitter may provide women with a low-demand and easily accessible coping mechanism that is not experienced or taken advantage of by men." Or, a more pragmatic explanation: "It is also possible that the use of these media replaces activities or allows women to reorganize activities that would otherwise be more stressful."

Here's a snag, though — the Pew Research Center study also claimed that social media increases our awareness of stressful events in other people's lives, which "generates a cost in terms of increasing psychological stress." Professor Keith Hampton, one of the study's co-authors, told the Guardian, "The social aspect of these technologies makes people more aware of stressful events in others’ lives. Learning about and being reminded of undesirable events in other people’s lives makes people feel more stress themselves." He added, "This finding about the cost of caring adds to the evidence that stress can be contagious."

So, about that social media detox you're considering. The Guardian compiled the experiences of several young people who quit social media; they reported less anxiety, a more positive mindset, and a better self-image. As the studies mentioned suggest, taking time away from social media could be beneficial if you're prone to absorbing the stress of others, or if you find the platforms increase your anxiety.

Potential downsides? Social media is the primary way many of us communicate and share major life events — Dr Pamela Rutledge, director of the Media Psychology Research Center, told Cosmopolitan that social media "allows you to stay connected to friends and family — this is important to your mental and physical health." She added, "Many people rely on social media to connect with you for meaningful reasons." Then again, the 2017 APA study revealed that "more than one-third (35 percent) of constant checkers report being less likely to meet with family and friends in person because of social media." Can someone please give us an unambiguous, unanimous answer?!

How, in the face of all these conflicting perspectives, can you determine whether a social media detox will help alleviate your stress? It might be worth taking note of your emotional state during and after your social media use, and attempting to determine whether you're using it as an outlet, as the Pew Research Center suggests many women do with Twitter, or whether you're simply internalising other people's stress.

Consider, too, how you'll stay connected with your friends and family without social media: if you communicate with your loved ones through other channels, you're probably good to go, but if you run the risk of complete disconnection without social media, you might want to reconsider. If you see a psychologist or therapist for an anxiety disorder or another mental health condition, it might be worth speaking to them if you're concerned social media is contributing to your stress. (And if you're constantly stressed out but don't currently see anyone about it, think about making an appointment with your GP.)

The conclusion? Deciding on a social media detox is, ultimately, a personal decision; it's difficult to conclusively state whether your online life could be increasing your stress. Take a look at your own social media usage and the emotional response you associate with it, and if the answer's negative? It might be worth logging out.