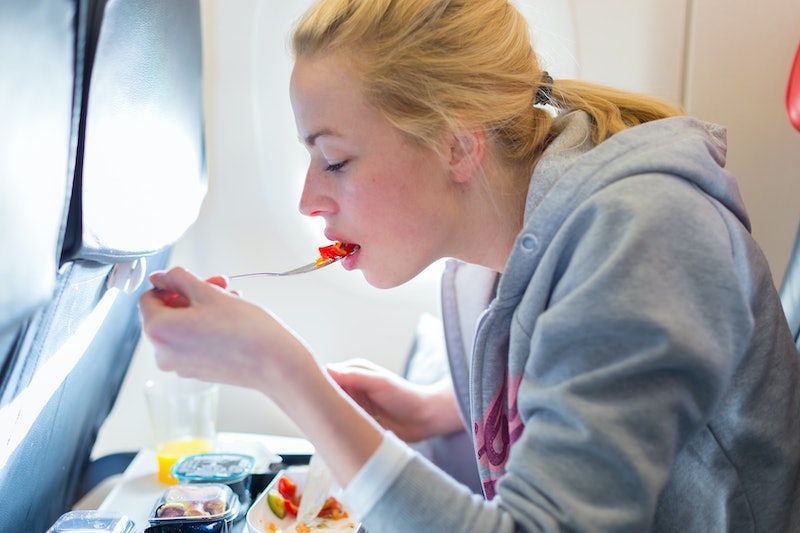 Perhaps the only reprieve you have long, cramped, smelly, uncomfortable flights is the microwaved and usually uninspired meal they serve halfway through. Bon appétit! Hold that thought, though. Should you perhaps hold off on digging in, due to what happens to your digestive system on a flight? It turns out some people have an argument for why you should opt for hunger as opposed to the in-flight meal.

Even though we tend to think the meals served on a plane are the little pick-me-up we need to get through the flight, at least one person argues that the exact opposite might be true. That meal could potentially be contributing to your jet lag, says Melissa Biggs Bradley, who founded Indagare — a luxury travel firm. Bradley told Bloomberg, "Basically, at superhigh altitude, your digestive system shuts down completely. Someone said to me it’s like being under anesthesia. So when you get off the plane, everything restarts and [your digestive system] has so much more work to do and so it makes you more tired."

First, you need to understand what happens to your body's oxygen levels on a flight. For starters, because you sit for hours, your blood isn't moving as much, and blood flow significantly halts. This factor alone contributes to reduced oxygen levels. Add to that the fact that plane cabins are pressured to imitate a 6,000- to 8,000-foot altitude, and your body can't absorb as much oxygen in this state.

But what does this have to do with your digestive system?

It all goes back to your blood oxygen levels. According to the Lung Institute, the digestive system needs oxygen to break down food and move it through the digestive tract with muscular contractions. Thus, it stands to reason that when your body isn't adequately circulating blood like it normally would and your oxygen levels are impacted, you might have to work harder to digest that in-flight meal. And, as you probably already know, there could be a connection between difficulty digesting and tiredness.

Plus, the drop in oxygen levels alone during your flight could make you sleepy. Combine all of this together, and that rubbery chicken and rock hard mashed potatoes might not be worth the exhaustion you could potentially feel after.

To that end, experts warn that it's skipping the meal that could make matters worse. Registered dietitian Carolyn Pallister told Insider, "Suggestions that your digestive system shuts down during a flight has no scientific foundation. By restricting yourself and not eating for long periods of time on a long flight you are likely to feel weak, shaky, and could even suffer from headaches and low mood." As you're probably already aware, when you go for too long without your food, your body could struggle to function properly because it doesn't have the fuel it needs.

Furthermore, consider this: if you're able to go to the bathroom, your digestive track is probably working just fine.

What does it come down to then? As is the case under most circumstances, your safest bet is probably to eat when you're hungry, and don't if you're not. If you're flying from New York to Australia, odds are you'll need a meal (and quite possibly a stiff drink) to help you get through the day-long flight and four-year-old kicking the back of your seat the entire time.

Plus, let's not forget that chewing and swallowing food while the altitude is changing can help keep the Eustachian tubes in your ears open and minimize pain. Remember to stay hydrated, try to avoid alcohol, and snack on fresh fruits and vegetables, if possible. Happy travels!