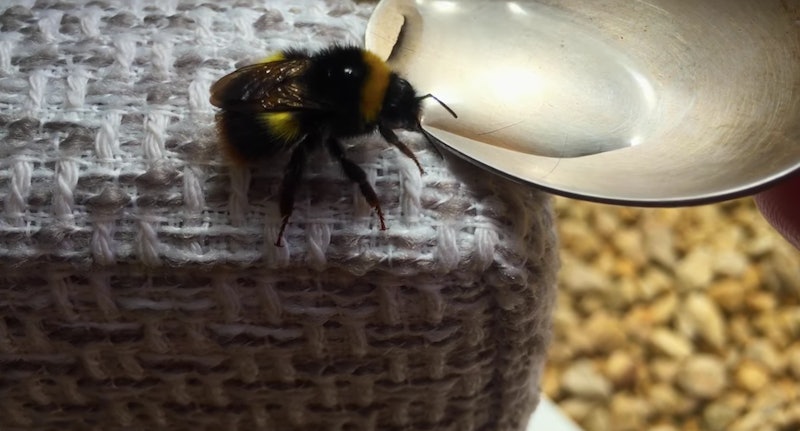 If you've ever been on the internet, it's virtually impossible to avoid coming across some version of the ultra-cute advice suggesting you give a little spoonful of sugar water to bees who are tired. There's almost nothing more adorable than imagining yourself Disney princess-ing it up, ferrying some sugar water to a bee who's had a hard day, and watching it fly away knowing you've saved a tiny life. But, well, there's some bad news: This sweet advice could actually do more harm than good.

Like I said, different versions of this advice have been circulating for years, but the one that recently caught attention was a viral, now-deleted Facebook post written by someone claiming to be sharing advice from the world's favorite natural history TV host, Sir David Attenborough, according to the Australian Broadcasting Company (ABC). ABC shared some lines from the post, including, "If bees were to disappear from the face of the earth, humans would have just four years to live," and, "If you find a tired bee in your home, a simple solution of sugar and water will help revive an exhausted bee."

But according to New South Wales beekeeper Chris Wyatt, giving bees sugar and water to get them back on their feet means feeding them "the equivalent of 'fast food,'" he told ABC. He too saw the post sweeping the internet, and according to ABC, had his doubts immediately.

However, the issue is when social media posts on the subject circulate unchecked — and non-beekeepers take it upon themselves to do it. Wyatt told ABC that when he first saw the advice, he "brushed it off as I guess a pretty trivial idea that probably wouldn't have a significant impact." But when Wyatt broke the crown jewel of internet rules and read the comments on the post, he "became concerned about comments ... in which people came up with increasingly inventive ideas to feed bees ... including filling bird baths with sugar water."

He wrote his own Facebook post and published it July 10 on the page for his lifestyle website The Productive Patch, where he gives advice about beekeeping, gardening, and self-sufficiency. In the post, which has been shared nearly 20,000 times and has more than 8,000 reactions, Wyatt tells people, "Please don't feed my bees." He went on to say that in the original viral post's comments, he saw some people had gone so far as to purchase honey to feed bees, and while the gesture was goodhearted, he saw extreme danger in it.

Feeding bees honey bought from a grocery store "carries a very high risk of spreading diseases such as [American foulbrood], which would mean certain death for a bee colony and likely many more hives in the vicinity," Wyatt warned. He also said that certain types of sugar can cause dysentery in bees, and that bees exposed to sugar syrups "will store syrup in the same way they do nectar, thus making tainted honey if enough is provided for them." That means the entire supply of honey produced by the bees would be tainted — a financial blow for a beekeeper, and a danger to the hive.

"Bees can and will die from exhaustion, but making sugary food sources available to save lethargic Bees [sic] may be doing more damage than good," Wyatt wrote.

Australian Honey Bee Industry Council Executive Director Trevor Weatherhead added that us regular folks putting out sugar water for bees is just "not useful," ABC reported. "If they saw a honey bee out on its last legs and they went to feed it some sugar and water there's every likelihood they'll get stung and the bee will die in any case," he explained.

It's a hard truth, but considering the apparent risks that come along with feeding bees, especially bees that may be kept by a local beekeeper, leaving sick or tired bees alone is, contrary to the internet's most precious advice, your best course of action.