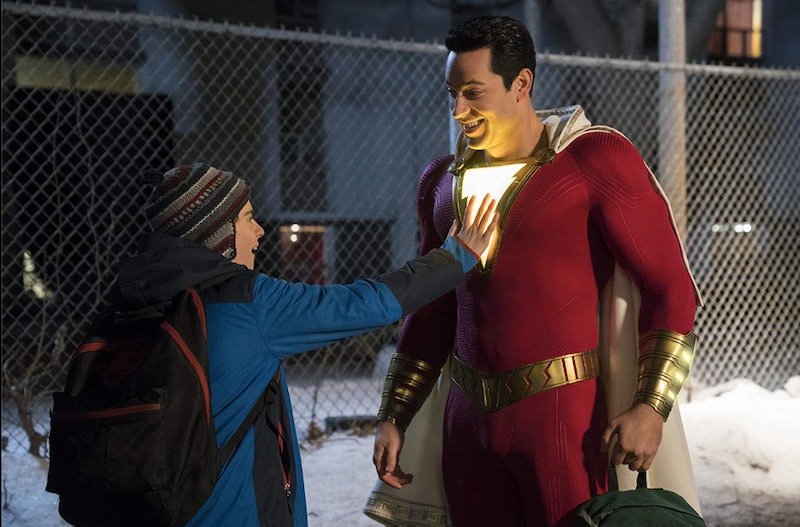 If you’re a DC fan and have been waiting for a new superhero to be introduced into the onscreen mix, it's almost your time. Shazam!, out Apr. 5, brings the relatively obscure DC hero to the big screen. But he’s no regular superhero. Shazam (Zachary Levi) is actually a 14-year-old boy named Billy (Asher Angel) who gains powers and turns into an adult. So while you're probably decided on catching his origin story in theaters, there are some other decisions to make, like what kind of screening to to attend. Buying a ticket for a showing that includes extra bells and whistles means spending more money, though. So while you don’t need to watch Shazam! in 3D to enjoy it, the extra dimension could double the fun.

A big chunk of the movie focuses on Shazam discovering his powers, so the 3D effects will likely come into play there. And, unlike the other, grittier DC movies, this one is pretty comedic. The trailers show plenty of goofs from when his powers accidentally wreak havoc, also creating opportunities for the use of 3D. And, of course, there will be action-packed sequences galore, like the one where the bus nearly falls off the bridge, that will feel even more intense in the enhanced version. Heroic Hollywood reported that director David F. Sandberg opted to check out the 3D version, adding a picture to his Instagram Story of him wearing his 3D glasses in the theater.

The director also posted on Instagram about Shazam! playing in IMAX, though that’s only in 2D. “Got to visit IMAX headquarters today to look at #Shazam on the biiiiiiig screen. Couldn’t fit the whole screen in a photo,” wrote the director. But the great thing about IMAX is that it’ll still have some of the benefits that come with 3D. The movie’s IMAX page says the “crystal-clear images, coupled with IMAX's customized theatre geometry and powerful digital audio, create a unique environment that will make audiences feel as if they are in the movie.”

Shazam! isn't your typical superhero movie — at least considering what else has been going on in the DCEU and MCU over the last several years. It's lighthearted and tons of fun, focusing more on the hero coming into his new self rather than facing the villains from the comic books. In a set visit interview, per Collider, Levi spoke about how amazing it was to play his dream role and get in touch with his inner child.

“As a nerd who loved and lived this world for so long, and still do to some level, that I don’t have to restrain myself with the f*cking coolness factor, is so great. I have to act so little,” said the actor. “I just get to be me on so many levels. It’s great. It’s really really fun."

There’s so much to look forward to in Shazam!, and it's clear that Levi is thrilled to introduce the character to new fans. So it doesn’t matter if you choose to watch it in 3D, IMAX, or just the regular version, you’ll still have a blast watching it.