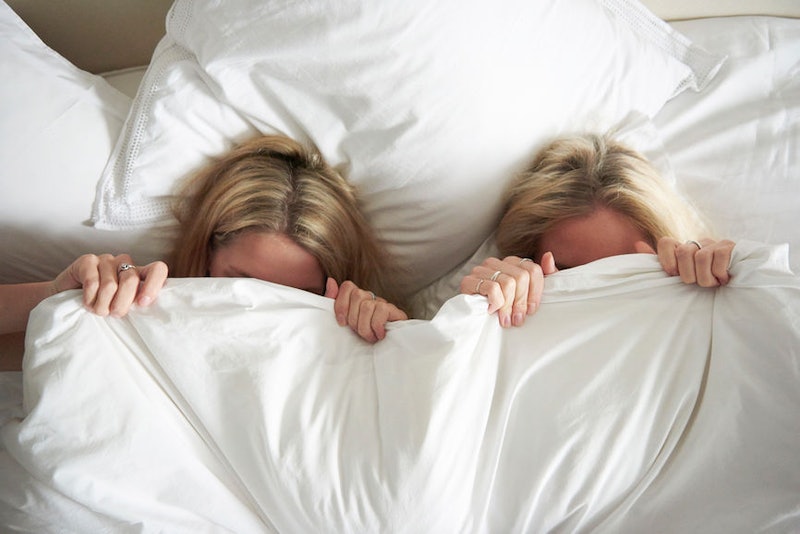 This one's tough, and it feels super personal. Sure, you share everything with your significant other, but does that really mean *everything*? Like, your bowel movements or, say, your menstrual cycle? Today, I'm asking the question, should you sign your partner up to your period app, and I'm getting relationship experts to weigh in.

First up: a period app essentially helps you keep track of when your period is coming, how long it lasts, if you're late, and even (I guess, but I can't say I've done this) if your period is more or less heavy than normal. The apps are useful as a reminder for when you need tampons, when to expect cravings, and if you're going to be on your period for big events and holidays, so I definitely see the virtues in tracking, but the question is, should your partner have access to this information, too? It's not their body, so it shouldn't be their thing, says one side of the house, but on the other, it can also bring a couple closer, says the other.

Period app Clue told Slate that cycle-sharing was “the most requested feature since we initially launched Clue back in 2013," so there are obviously people out there who want access to this information. A first-person piece on Well+Good describes what happens when a woman shares her cycle with her boyfriend, and it definitely has an upside when it comes to intimacy. For one thing, the sex is better, as women apparently want different things at different times of their cycle. The woman writes that when her testosterone levels were low, the app told her and her boyfriend, "Be generous and take your time. Is there a new position you’ve been talking about trying? What about role-playing? Let your imagination run wild and see what develops."

The timings of day to day life and important conversations also started being take into account when the two of them had access to her hormones and period knowledge. When she was ovulating, the app told them both that "the verbal centre of her brain is positively affected by all the increase in oestrogen, so it’s....an ideal time to talk to each other about things that are important to your relationship’s growth." Understanding that hormones mean a woman wants different things on various days, and arming both members of a couple with this knowledge, can only be a positive and life-enhancing thing.

I spoke to relationship expert Jo Barnett, who takes an overall balanced approach on the topic. "The benefit of giving your partner access is that is gets your partner in sync," she tells me. However, there's a flip side, she says. "On the other hand, I do think some things should be left private, and sometimes too much information takes away from the romance." That's also true in my experience. I don't find it a turn-on to talk about the inner functionings of my body, and perhaps there's nothing wrong with a little mystery. That said, avoiding it altogether isn't something that any woman should feel obliged to do, and if you do want to share, there should be zero stigma around doing so.

Susan Winter is a bestselling author and relationship expert, and she stands on the "no" camp of signing your partner up to your period app. "As for knowing you're partner's cycle...why? TMI," she tells me. There's a caveat, though: "I understand the usage of an app for tracking fertility if the couple wants to start a family." However, her argument against the app also stems from the fact that it implies a squeamishness about periods in the first place.

"Tracking your partner's cycle implies that her period is a barrier to having sex. I've never understood the need to refrain from sexual intimacy during a woman's period. This is a natural part of her life and her fertility cycle. It's often looked at (and she's looked at) as being dirty and unclean. True, lovemaking during one's period does require some preparation, but the benefit outweigh the inconvenience. Sex during one's period is known to relieve cramps. Additionally, your partner is the embracing the totality of who you are."

So, from Winter, it's a yes to sex, and a no to sharing period apps unless it's for fertility tracking, and personally, I agree with her. When a couple wants to conceive then yes, it's great to be on the same page. But I think a little bit of mystery goes a long way, and I don't see a huge downside to not sharing this information. That said, it should definitely be part of a couple's conversation and not made to be taboo. So I guess it's a case of to each their own here.