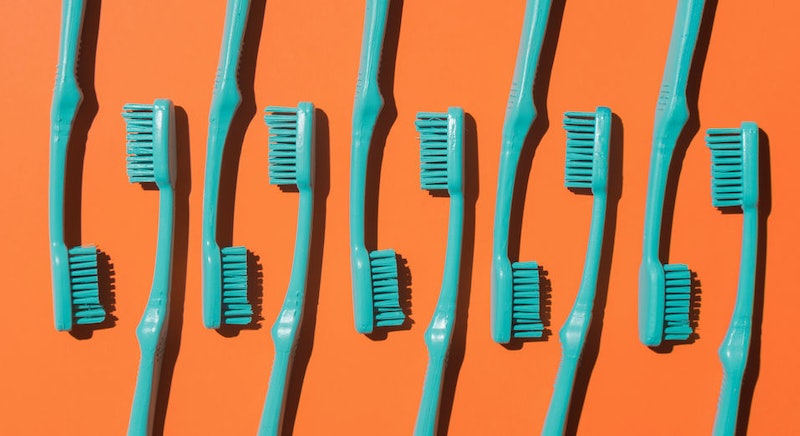 I'll be honest. When I pick up a new toothbrush from Boots, I rarely pay attention to the hardness of the bristles. And I'm guessing I'm not alone. But failing to choose the right toothbrush could be inadvertently harming your teeth. So should you use a soft or hard toothbrush? And how much damage can bristles really do?

There are four categories of toothbrush: extra soft, soft, medium, and hard. You'll be hard-pressed to find the first and last types on the shelf. Dental clinic The Silverstrom Group writes that extra soft toothbrushes (also known as periodontal or sulcus toothbrushes) are designed for people with conditions such as gum disease. Essentially, people who need an extra gentle clean.

Hard toothbrushes, meanwhile, are not recommended at all. As Colgate reports, these tough bristles are more likely to wear away tooth enamel and damage gums. They are also more likely to result in sensitive teeth, states dental practice Method Dental.

A 2015 meta-study published in the Journal of Clinical Periodontology even found that bristle hardness was associated with gingival recession (receding gums). Other factors included the frequency of toothbrushing, the method in which people brushed their tooth, how long they brushed for, and when they changed their toothbrush. But researchers did admit that the data — which involved a small sample of just 159 people — was largely inconclusive.

OK, so that's a no to hard bristles. What about the medium type? Well, they're not the best choice either, according to cosmetic dentist Timothy Chase.

"I see a tremendous amount of [gum and tooth] damage from brushes that are not soft enough," he told Good Housekeeping. "Imagine you have a broom and you're trying to get dust out of a corner. If you had a really stiff broom, you'd wind up scuffing up the wall. A soft broom would take the shape of a corner and remove the dust easily." Hard to argue with that analogy.

That leaves soft bristles as the optimal choice. You may be thinking that there's no way they'll leave your teeth looking and feeling squeaky clean, but that isn't the case, according to Penn Dental Family Practice. As long as you brush in the correct manner, you'll produce the same — and potentially less damaging — results.

Oral-B recommends placing your toothbrush at a 45-degree angle to your gums and gently brushing in a circular motion. It's important not to scrub too vigorously near the gumline. The harder you brush, the more irritated your gums will be. Spend at least two minutes doing this twice a day and don't forget to floss too.

If you're concerned whether your brush could be harming your teeth, it's best to book an appointment with your dentist. They will be able to recommend specific brands and give you tip-top brushing advice. And there's always the option of switching from a manual brush to an electric one. Modern electric toothbrushes may not be cheap but they will stick to a gentle pressure, keeping your enamel and gums intact.

More like this
Here’s Where The NHS Nurses’ Strike Currently Stands
By Sophie McEvoy
TikTok Has A Genius Old School Hack For Saving Money
By Sophie McEvoy
What The UK Blocking Scotland’s Gender Recognition Bill Means
By Sam Ramsden
90 Epic Truth Or Drink Questions To Play 'Say It Or Shot It' With
By Bustle UK
Get The Very Best Of Bustle/UK
Sign up for Bustle UK's twice-weekly newsletter, featuring the latest must-watch TV, moving personal stories, and expert advice on the hottest viral buys.