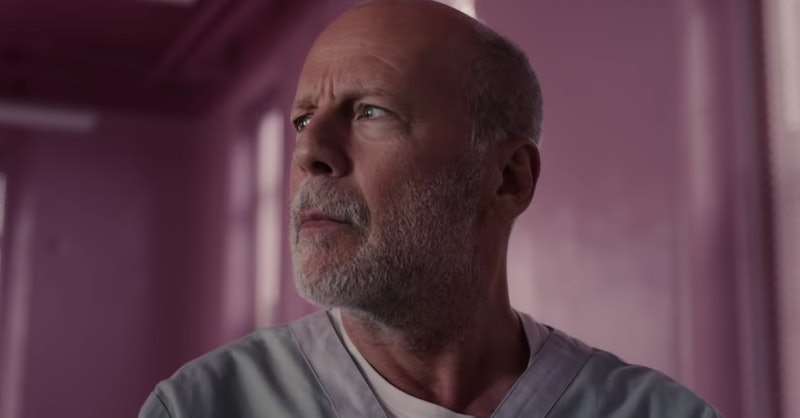 The upcoming M. Night Shyamalan thriller, Glass, serves as a follow-up to 2000's Unbreakable, as well as a follow-up to the 2016 psychological horror film, Split. That means you may want to see Unbreakable before Glass hits theaters on Jan. 18, and then you might also want to catch up on Split, too. That doesn't mean that you should necessarily look at Glass as a sequel film to both its predecessors, because Unbreakable and Split were two standalone films — almost.

Spoilers for Split ahead. Even though Glass uses characters and information from both Unbreakable and Split, this isn't your average superhero series in any way, so you can still expect to be surprised. When audiences flocked to the theaters to see Shyamalan's Split, the movie seemed like its own story that had nothing to do with Unbreakable. Only at the end of Split is it revealed that the movie starring James McAvoy takes place in the same universe as Unbreakable, which stars Bruce Willis and Samuel L. Jackson. In the final scene of Split, Willis' character David Dunn appears at a restaurant, watching the news report about McAvoy's character, The Horde, in a shocking twist.

The trailer for Glass shows how the 2019 film brings the characters from Unbreakable and Split together, all three leads in the same room.

Even though you could probably watch Glass and enjoy the movie on its own, you'll appreciate it even more after seeing both Split and Unbreakable, especially because those two films are so different. While Unbreakable seems like a full-blown superhero movie, dark as it may be, Split is more of a psychological thriller, and so putting them together seems like an interesting, and ambitious, experiment.

In the name of conducting ambitious experiments, it actually could be fun to start with Glass before going back and seeing Unbreakable and Split, because Shyamalan has suggested that Glass will seem like a standalone movie, even if technically it's a superhero crossover event á la Avengers: Infinity War.

In a recent interview with Digital Spy, the writer/director explained:

"I said to [rights owners] Disney and Universal, 'Pretend there's no previous movies and I came to you and I said that I want to make a movie about a hospital that treats people who believe they're superheroes and three of their patients escape... Oh and by the way, it stars Bruce Willis, Sam Jackson, James McAvoy and Sarah Paulson. Will you make that movie?'... Person XYZ who hasn't seen the other two will come to see that."

So there you have it. You don't need to see the past films from Shyamalan's Eastrail 177 trilogy before going to check out Glass. Then again, you'll most likely have a greater appreciation for the new film after watching the standalone films about The Horde, David Dunn, and Elijah Price/Mr. Glass (Jackson).

This is all sounding very wishy-washy and contradicting, huh? Well, considering that The Horde has 23 different personalities, self-contradictory is sort of the spirit of Glass. No matter in which order you decide to watch Shyamalan's superhero-inspired films, you're in for a lot of chilling surprises.