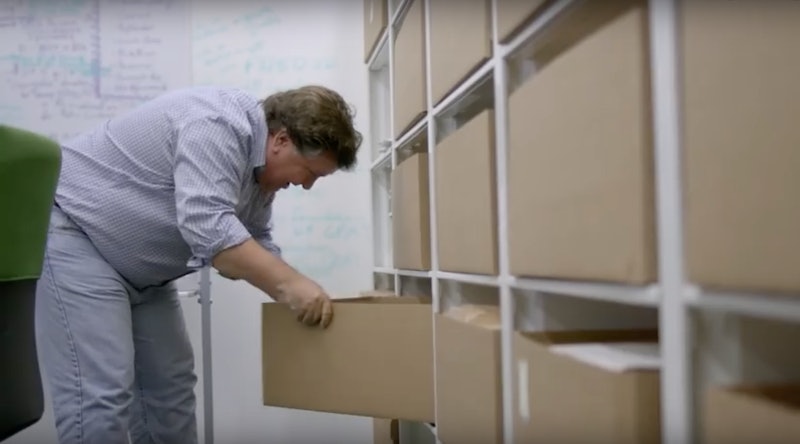 On Tuesday, an explosive report came out claiming that President Trump and his family have dodged hundreds of millions of dollars in taxes over the years. But there's apparently more to the story. Pretty soon, Showtime's Trump & Taxes documentary will provide a behind-the-scenes look into the painstaking process New York Times reporters went through to investigate and factcheck the story before publishing.

Showtime announced Tuesday evening that it would air the new documentary film on Trump and his family's alleged tax schemes, which his lawyer and brother have vehemently denied ever occurred. According to the Times, those allegedly included a sham corporation to disguise millions of dollars, improper tax deductions, and undervaluing real estate holdings by hundreds of millions of dollars on tax returns to drastically cut down on the tax bill.

"The film follows a team of New York Times investigative reporters through their diligent and intense efforts in uncovering the information that led to this exclusive report," according to a release from Showtime, via The Hill.

On the same day as the report's publication, the White House pushed back, denying the allegations. “Fred Trump has been gone for nearly twenty years and it’s sad to witness this misleading attack against the Trump family by the failing New York Times,” White House press secretary Sarah Huckabee Sanders said in a statement, according to Politico.

“Many decades ago the IRS reviewed and signed off on these transactions,” Sanders continued. “The New York Times’ and other media outlets’ credibility with the American people is at an all time low because they are consumed with attacking the president and his family 24/7 instead of reporting the news. Perhaps another apology from the New York Times, like the one they had to issue after they got the 2016 election so embarrassingly wrong, is in order.”

The documentary, titled The Family Business: Trump and Taxes, is a part of a larger series by Showtime called The Fourth Estate, which premiered on the network earlier this year. The series reveals what a film crew embedded with New York Times reporters Susanne Craig, David Barstow, and Russell Buettner captured after their more than year-long investigation , The Hill reported.

"Fred Trump's estate tax returns is in the building right now," says Craig, one of the reporters, in the trailer. "It's incredible that we have it and that opened a door to understanding a huge transfer of wealth that had happened. It gave us so much more information to be able to understand the tax games that were played. And then once you sort of pull the string, the whole thing unravels."

"We followed a singular story, outside of the daily news cycle that illustrates so much of the investigative reporting process – the patience, the perseverance, and the drive to understand a story without knowing where it would lead," said Jenny Carchman, the director of the Showtime documentary, according to Multichannel News. “We witness these journalists talk to people, review thousands of documents and spend months of exhaustive fact-checking, and see how vital the press’ role is in uncovering the truth.”

New York tax authorities have said they are looking into the allegations from the report, though even if there was evidence of wrongdoing, the president is unlikely to face criminal prosecution because the alleged tax fraud would be past the statute of limitations, USA Today noted.

Trump and Taxes will offer a look at the exhaustive journalism of the reporters and retrace their efforts to bring the alleged tax schemes to light. It airs on Sunday, Oct. 7, at 8:30 p.m. EST.