Brooklyn Whatever
By Rebecca Fishbein
March 19, 2018

The only green food I'll eat is either frosting on a carrot cake (you can trick me into carrots if you grind them up into cake, which is, I assume, how carrot cake is made) or if they've spent three to six weeks in a barrel of brine. Pickled food is inarguably the best food, particularly if you've got a salty tooth like me. And now, one food blog's got to scoop on the best way to force veggies down my throat: Brussels sprouts pickles, now being manufactured in Brooklyn.

According to Delish, Brussels sprouts pickles are indeed a thing. They're being produced by Brooklyn Whatever, a mother/son duo who make "schnacks" like "Shpickles," "Shnuts," and "Schmolives" in New York City's coolest borough, then hawk them at select local grocers all over the country. "Shpickles," according to Brooklyn Whatever's website, are basically any pickled vegetable that's not a basic cucumber, and which Brooklyn Whatever show-runners Rachael and Abe Shamah douse in brine made using an "old family recipe" comprised of oregano, red pepper flakes, andcloves of garlic — but no dill! Shpickles run the gamut from broccoli to carrots to cauliflower to okra, to tiny beets, to string beans, but Delish was particularly floored by the Brussels sprouts, as evidenced by this video they produced: 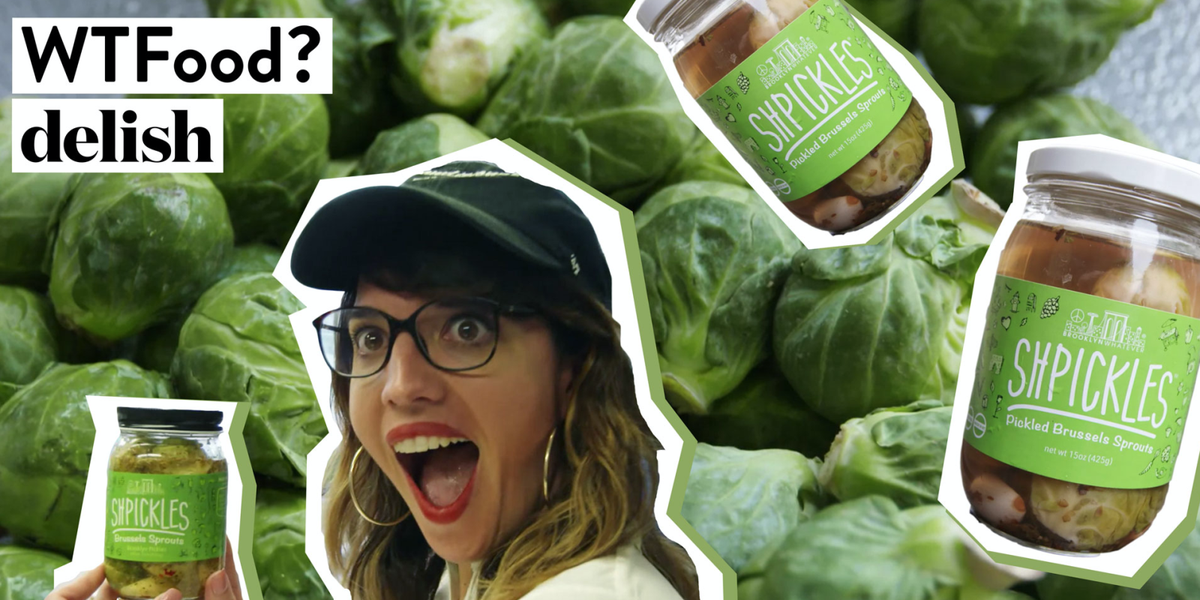 The finished sprouts, which run $30 for three jars, look pretty good, and that's coming from a total lachanophobe. Delish describes them as "INSANE," noting that even with the brine they "keep their crunch and become pickle bombs of funky flavor," which is enough endorsement to inspire me to consider trying them.

According to Delish, there's a whole world out there of weird pickled things, like pineapple, blueberries, watermelon rinds, and pig's feet. Plus, pickling may have some health benefits, according to Medical News Today — fermented foods actually make the vitamins and nutrients they harbor easier for your body to absorb, so even if you're anti-vegetable and pro-pickle, you might be able to stave off scurvy. In fact, some people think pickles cure everything, like muscle cramps, social anxiety, and the common cold, although you may have to battle some cavities in exchange.

As for the goods over at Brooklyn Whatever, they're not limited to pickled vegetables. Schnuts are sweet nut mixes doused in brown sugar, herbs, and spices, with flavors including Sweet & Savory, Curry, Creole, and Ghost Pepper (OH GOD). Then, there are spicy Shmolives; HotShauce, which comes in Stone Red Hot and Wings Hot, Shauerkraut, which comes flavored with Chipotle or Sweet & Hot; Shbarbecue sauce, whose flavors include hickory apple, Sweet Carolina, and Southern Classic; Shdressing, which comes in Blueberry Balsamic and Garlic Parmesan; Shketchup, which comes in habanero or jalapeno flavoring; Shpreads like apple butter, cherry jalapeno jamp, hot pepper jam, and regular jalapeno; Shweet peaches and pears, and Shmustard, which comes in Sweet and Zesty. Best of all, whenever you buy any of these babies, you get a very cute tote.

Brooklyn Whatever's Brussels sprouts aren't universally available just yet, although they've got a whole bunch of stores selling their stuff in New York City (including at Forager's in DUMBO, home to the greatest salad bar of all time). They're also available on Long Island and in a slew of East Coast states, including in Massachusetts, Pennsylvania, Maryland, and in Washington, D.C., and Il Ritrovo in Sheboygan, Wisconsin, appears to sell Brooklyn Whatever's goods, too.

Do note that however much you enjoy these pickled products, it is truly unwise to transform yourself into a pickle, lest you end up rolling into a sewer and having to murder a cockroach in order to battle an army of rats and return home. It makes for good television, but it is decidedly less good in real life.