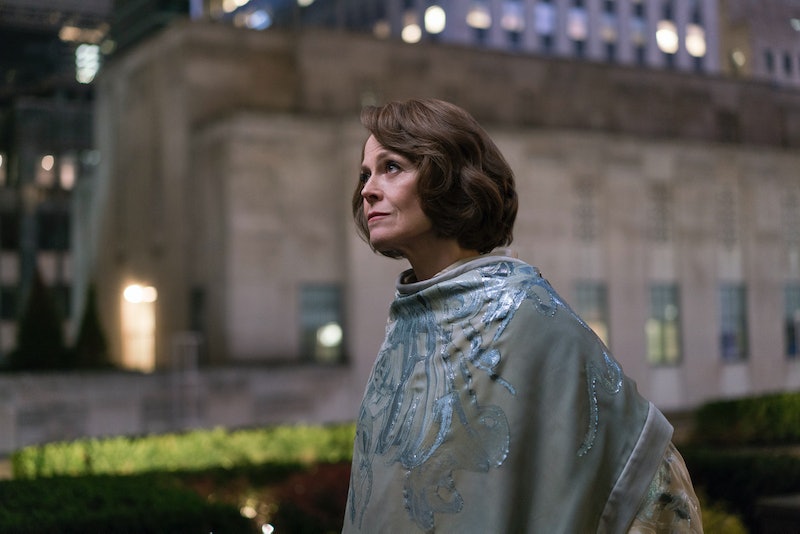 Among the intriguing teases from Friday's round of Comic-Con goodness was some more insight into Marvel's Netflix-sized answer to Avengers — The Defenders. The latest tease here involves The Defenders' Sigourney Weaver, and why her character shouldn't necessarily be labeled "the bad guy." It might be tough to imagine Weaver's character not exactly being a villain, because she's certainly been built up as one.

This latest information comes via Entertainment Weekly. During an interview at Comic-Con, head of Marvel Television Jeph Loeb took time to allude to the fact that Weaver's character may not be as bad as you think. She may even have an intriguing agenda, since he said,

"She’s our main antagonist. We don’t ever refer to anyone as the bad guy. She has a point of view. They have a point of view. And they may not necessarily be the same point of view. She’s part of a long-term plan to get something done, and if you have been watching all of the shows, there are little bread crumbs along the way that turn into the cake that is Defenders."

In this new Marvel world, fans already know that Weaver will play Alexandra Reid, but exact details are few and far between. Her MCU Wiki page only hints that she looks like a wealthy but dangerous woman. One of the few full-length trailers out there shows her briefly speaking to the group of Defenders, seemingly from a position of authority. So you can surmise she has power, but what is the source of her power? Who does she work for? What is this particular — and possibly redemptive — point of view that Loeb is referring to? There are so many questions, you guys, and not nearly enough answers.

The air of mystery seems to only thicken where Alexandra is concerned, because she's been an unknown quantity for quite some time. MoviePilot was quick to point out in 2016 that Alexandra has no place in the Marvel Comics. That means she could be bringing something entirely new to the table — and it mean the plot of The Defenders isn't as predictable as if she had come straight out of the comics.

Perhaps what's most intriguing in Loeb's comment is that Alexandra has been the connective tissue among Daredevil, Jessica Jones, Iron Fist, and Luke Cage. It sounds like ultra-fans might have to go and rewatch those shows to try and find some clues about Alexandra's movements. At the very least, you might have to wrack your brains to see if you missed out on any clues.

More like this
Netflix Just Rebooted A Classic ‘90s High School Drama
By Maxine Harrison
'Bridgerton’s Jonathan Bailey & Simone Ashley Just Teased A First Look Of “Kanthony” In Season 3
By Grace Wehniainen, Alyssa Lapid and Sam Ramsden
Everything To Know About 'RHOC' Season 17
By Brad Witter and Sophia Moore
The 'Black Bird' Stars Are Both Heading Back To Apple TV+
By Brad Witter
Get Even More From Bustle — Sign Up For The Newsletter