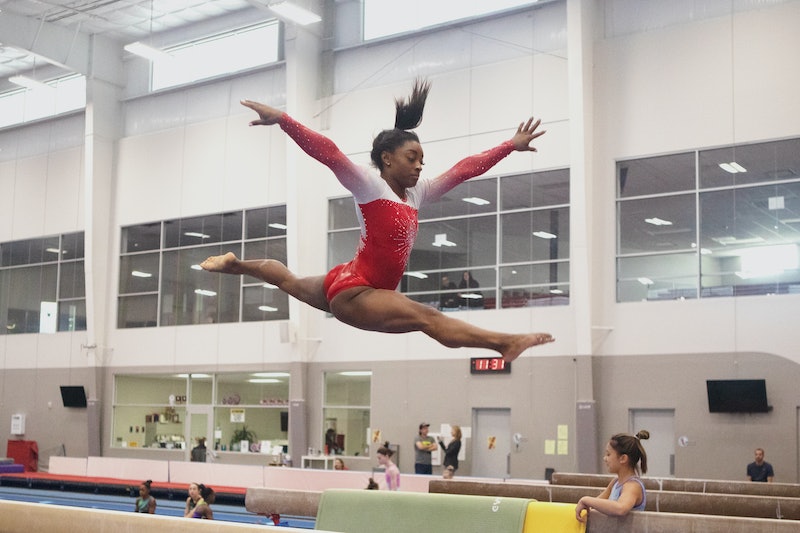 When you watch Simone Biles compete, it's likely that the last thing on your mind is what makeup she's wearing. Probably because at just 22 years old, Biles has earned the right to call herself a legend. And considering all of her accolades, the athlete is fully entitled to boast about the fact that she's the most decorated American gymnast in history, with a total of 14 medals; or that she was named on TIME's 100 Most Influential People list back in 2017 — but she won't. Biles is a woman who likes to keep things simple.

Still, I find that hard to believe when I first see her practicing at the World Champions Centre in Spring, Texas, a suburban area of Houston where she was raised. Witnessing her defy gravity before my eyes, then subsequently landing gracefully on her feet, isn't what I would define as simplistic — it's what most would call marvelous. But when it comes to her beauty routine, the superstar isn't exactly making leaps and bounds to meet any particular set of expectations, even in a sport where athletes are expected to "be well groomed in [their] appearance," according to the 2019 USA Gymnastics Women's Program Rules and Policies handbook. "I set the standards first," Biles tells me when it comes to feeling her best before she competes. "That's what makes me feel comfortable."

The gymnast goes on to share she doesn't have any particular set beauty routine or ritual that she follows before she performs. However, the author of Courage to Soar does admit there is one area of her face she likes to focus on. "Right now, I'm really into lashes and my eyebrows," Biles says, adding that she gets her eyelash extensions done down the street from the World Champions Centre. "I like a good wing for eyeliner before I go out. But I don't have any specific products [I like to use.]"

When it comes to her hair, Biles maintains the same easygoing mindset before showtime. However, despite the gymnast not being focused on her mane when she hits the mat, some people watching her definitely are. But Biles has yet to waver in the face of a very specific type of criticism Black women often face when it comes to their tresses.

Back in 2017, the athlete received an onslaught of Twitter backlash after she posted a photo of herself while practicing a cheerleading routine. Her hair, which was straightened at the time, had just come out of a bun after being up for a four hour rehearsal. Since Biles' hair is natural — as confirmed by her hairstylist Janay Lewis — her curls began to re-form at the roots. But that didn't protect her from internet ridicule, with people mainly claiming her hair was somehow disheveled because of the two different textures. Yet, despite that instance, Biles says she's never succumbed to the pressure of ensuring her hair looks any particular way as she competes — especially since making sure her hair is laid won't win her gold medals.

"It's really hard, because we're out there sweating out ... our edges," she tells me. "I just try to focus on my performance because at the end of the day, hair is hair and people are gonna say whatever."

And although she has every right to be upset with online bullies, Biles has still made room for compassion, even when others are exceptionally cruel to her. "They don't realize how hard it is," she explains. "I feel like if they lived a day in our shoes, they would figure out that it's a lot harder to maintain your hair and to have it looking perfect while you're doing all these crazy skills."

Biles' laid back approach when it comes to beauty makes it easy to see why she recently partnered with Candid — a simple-to-use dental alignment product — to become the company's first celebrity spokesperson, especially as an athlete.

"Once you go out there, everybody focuses on your smile and your teeth," she explains. "It's the overall feature of your face." Case in point: Although women gymnasts are often encouraged to smile during their floor routines, when Biles was competing on Dancing With The Stars in 2017, the judges docked her points for having what they called an "inauthentic" smile. While on the show, Biles pointed out that "smiling doesn't win you gold medals," but it's still clearly something performers of any type have to be mindful of.

On top of that, "We don't really have [a lot of] time on our hands to go visit the orthodontist, so they send [the aligners] directly to your door," she explains. "You have your whole entire set, you can continue to do your sport, and your smile will shift to the way you want it to."

Biles also acknowledges how accessible the brand is from a financial standpoint. Patients have the choice to either pay $88 per month, or a one-time lump sum of $1,900, which is ideal for young athletes, who are in the early (and expensive) stages of establishing themselves as professionals. "I think [a nice smile] helps every athlete with their confidence," she adds.

Endorsements aside, as our conversation continues, I can't help but admire Biles for how comfortable she is in her skin at an age when many are deeply insecure — especially with the added pressure of being a celebrity. "It wasn't as easy when I was younger, but now I feel like I'm just kind of used to all of the attention that I get," she shares. "And once I go out there and compete, I know what's to be expected."

However, there is one thing the athlete is unsure of: The sudden fascination with black "yeehaw" culture. "It has [always been there,]" she explains. "Growing up [in Houston], even in school, we learn all about the rodeo and all of the country line dances. I kind of thought it was odd that nobody else actually learned that." Biles even shares that cowboy boots have long been a staple in her wardrobe, but jokes that it may be time for an upgrade. "I need to get new ones so that they fit," she laughs.

As far as the future goes for the athlete, things are looking bright. Not only is she gearing up to dominate the 2020 Tokyo Olympics, but Biles is also looking for new moves to be named after her as well. And though to many, it may appear as though she's done it all, the athlete shares that she has no plans of slowing down anytime soon. "I guess [generally] for a 22-year-old, I've made it," she says. "But for me, I feel like there's still more to come."

I, for one, will be sure to stay tuned.

More like this
Kaz Kamwi Swears By This Hair Hack For A Salon Finish In Minutes
By Shahed Ezaydi
The 9 Chicest Celebrity Bob Haircuts Of 2022
By Olivia Rose Ferreiro
How To Put In Hair Tinsel, The Latest Y2K Trend Making A Comeback
By Olivia Rose Ferreiro
M.A.C. Cosmetics’ Newest Collection Celebrates Whitney Houston's Legacy
By Audrey Noble
Get Even More From Bustle — Sign Up For The Newsletter