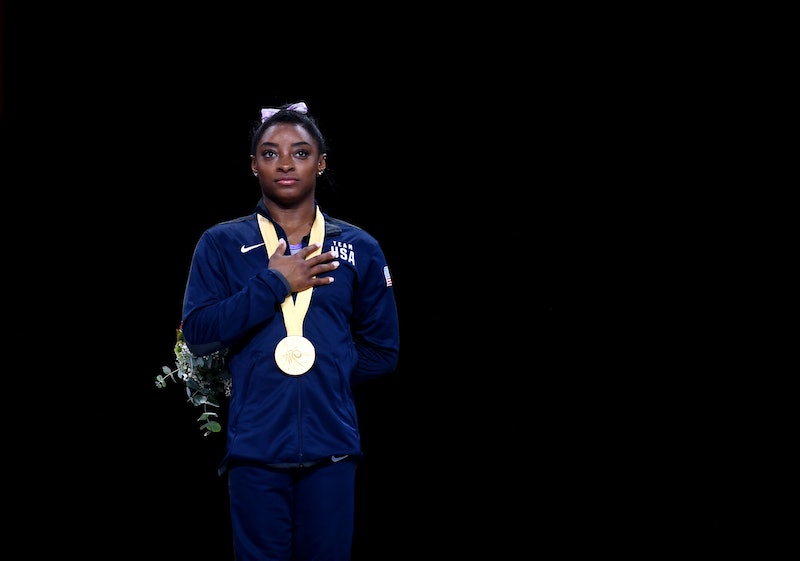 Four-time Olympic gold medalist Simone Biles is now the most decorated gymnast in history. At the 2019 World Artistic Gymnastics Championships in Stuttgart, Germany on Sunday, Oct. 13, Biles broke a world championship record by winning her 24th and 25th world medals with her performances on the floor and balance beam. Biles’ wins shatter the last long-held record of 23 world medal wins obtained by Belarusian male gymnast Vitaly Scherbo in the 1990s, as per The Washington Post.

Biles’ wins come on the heels of another historic feat accomplished by the 22-year-old gymnast earlier this week: She garnered her 21st world medal win at the team competition on Tuesday, Oct. 8, making her the most-decorated female gymnast, as the New York Times reported. On the last day of the World Artistic Gymnastics Championships on Oct. 13, Biles received 15.066 points on the beam and 15.133 points on the floor, which had put her ahead of fellow American gymnast Sunisa Lee, per People.

Shortly after Biles’ historic win on Sunday, Oct. 13, the USA Gymnastics team took to Twitter with a celebratory message for the gymnast. “25. WORLD. MEDALS,” the tweet read alongside a photo of Biles. “@Simone_Biles’s strength and skill is unparalleled in #gymnastics. All hail the GOAT!”

Biles, who first got into gymnastics in 2003, gained widespread recognition at the 2016 Olympic Games in Rio de Janeiro, Brazil alongside the U.S. women’s gymnastics team, where she garnered four Olympic gold medals as well as a bronze. Along with Aly Raisman, Laurie Hernandez, Gabby Douglas, and Madison Kocian, Biles and co. were affectionately dubbed the Final Five by the public. Hailed as a top contender for a fifth (or perhaps even more) gold medal, Biles is expected to compete at the upcoming 2020 Olympic Games in Tokyo, Japan.

In an exclusive interview with USA Today prior to her historic win on Oct. 13, Biles stressed the importance of confidence on the heels of her fifth all-around title win at the world championships. “It’s important to teach our female youth that it’s OK to say, 'Yes, I am good at this,' and you don’t hold back,” she said in the Friday, Oct. 11 interview. “You only see the men doing it. And they’re praised for it and the women are looked down upon for it. But I feel like it’s good because once you realize you’re confident and good at it, then you’re even better at what you do.”

She continued, “It’s not out of cockiness. I’ve won five world titles and if I say, 'I’m the best gymnast there is,' [the reaction is] 'Oh, she’s cocky. Look at her now.’ No, the facts are literally on the paper. I think it’s important to teach [young girls] that.”

On Oct. 11, Biles celebrated her fifth all-around title win on social media. “feeling GOLDEN this morning,” she captioned a photo of herself with the gold medal on Twitter.

Biles' record-breaking accomplishment further solidifies her in place in history as one of the greatest gymnasts of all-time.