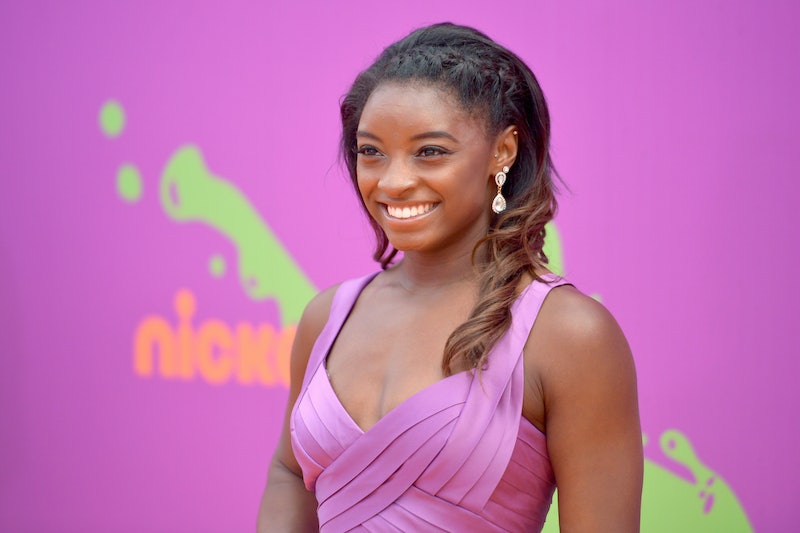 Gymnast, Olympic medalist, and now... viral video sensation? Simone Biles' post-dental surgery video is everything you need in your life. It shows a woman whose achievements are unbelievably serious (Biles has won five Olympic medals, just saying) at her goofiest — in the best possible way, of course.

In the video, presumably Biles is still feeling the effects of the anesthetic administered before her surgery to get her wisdom teeth removed, because as she comes out of her slumber, she starts driving an invisible car and honking its horn. No, there's no obvious prompt for her doing so, it just sort of happens — and even the invisible car owner herself doesn't seem entirely sure as to why it happened once the meds wore off.

Then, just like any person who has had to tackle the rush hour route back home after a long day at work, she slumps back into her chair. Hey, that whole driving thing is exhausting. If there was any doubt that Biles has a sense of humor, this video should dispel it. Clearly, this isn't the athlete at her most agile, but as Biles herself stresses, she's posting it to make her fans laugh.

Of course, if you're a loyal fan of the athlete, you were probably already aware that something like this was coming. After all, Biles had already tweeted some selfies of herself ranging from her looking cute in braids to some more anarchic snaps of her with some form of bandages in her mouth explaining she'd just had wisdom teeth surgery and promising "a funny video for y'all." She did not disappoint.

So, did Twitter like it? Obviously. It prompted many of Biles' fans to share their own stories. User @LDLG confessed, "I woke up doing sign language," before delivering the kicker: "I don't know sign language." Meanwhile, others just wanted to chime in with praise for the athlete.

Perhaps the most enticing part of the whole story was a follow-up tweet that Biles published, stressing that this was just a small part of a larger work, a mere paint stroke on the larger Sistine Chapel of a much longer video, apparently, with the former Dancing With the Stars contestant stating, "The full video is 14 minutes long, other parts are hilarious too!"

If there is any justice in this world, your favorite gymnast will release the full version soon. Ideally the director's cut, please. It's only fair.

More like this
Bridgerton’s Simone Ashley Stars In ODESZA's "Love Letter” Music Video
By Radhika Menon
Kathy Hilton Tried To Explain Why She Misidentified Lizzo As Precious On Live TV
By Jake Viswanath
Sophie Turner & Joe Jonas’ Fave Taylor Swift Album Is Full Of “Bangers”
By Sam Ramsden
The Sean Bean Intimacy Coordinator Controversy, Explained
By Sam Ramsden
Get Even More From Bustle — Sign Up For The Newsletter