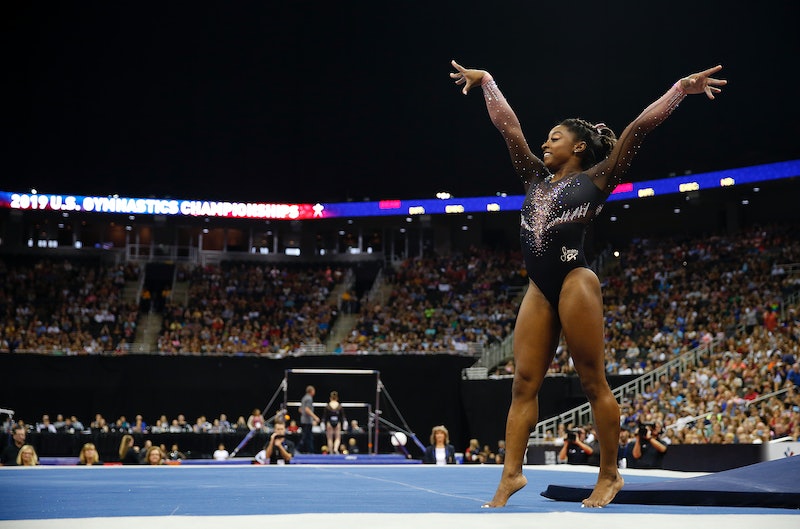 For many Americans, gymnastics fever is something that only strikes every four years during the summer Olympics. But, a couple pieces of history were just made in the sport and they're something everyone should see. During the U.S. Gymnastics Championships, Simone Biles landed a triple-double during her floor exercise routine, becoming the first woman to ever do so in a competition. And, because that's not enough, a couple days before that, she also became the first person to do a double-double dismount from the balance beam in competition.

Since you're probably wondering what all of this means, a triple-double is two flips with three twists. Like, at once. Like, you catapult yourself into the air and do two flips and three twists before landing. It's incredibly impressive and watching Biles do it, it looks like it should be impossible. How is she that high in the air? As one commenter perfectly put it on Twitter, "Gravity is just a suggestion for her."

As for the double-double beam dismount, that's two somersaults and two twists. Again, that's after catapulting yourself high into the air, this time, while coming off of a four-inch wide plank that's raised four feet off the ground. No big deal.

As reported by ESPN, Biles landed the triple-double during her floor routine in preliminaries on Friday, August 9 — which was officially the first time a woman had ever landed the move in competition — but she put her hands down during her landing. Even though she made history, this disappointed her. "I'm still so mad about floor, but, you know, I try," Biles told the Olympic Channel. "It's such a hard skill that I shouldn't be mad, but I'm so mad about it because in training I've never done that before."

Later that day was when the 22-year-old landed the double-double dismount from the beam. Biles looked very excited after the landing, but was calmer in her interview after the meet. "Then on beam, I was like, OK, let's just try to have a good beam," she told the Olypic Channel. "I'm happy with the way I ended the meet, but it was a little rough, hopefully Sunday is better."

And, because she's Simone Biles, Sunday was better. On Sunday, Biles landed the triple-double during her floor routine cleanly, without putting her hands down. She did simplify her beam dismount, EPSN reports, but who can blame her? She also was overall in a better mood that day, which she says helped her. "The other day, I was doing angry gymnastics, and I was just really upset," she told ESPN of being disappointed in her floor routine on Friday. "Then today, it was just like back to normal and happy."

And "back to normal and happy" for Biles meant winning the whole thing and earning her sixth U.S. Gymnastics Championships all-around win. She's now tied for the most wins with Clara Schroth Lomady, who won six national all-around titles in the 1940s and '50s, as reported by CBS News. The win also means that Biles has now won 20 straight all-around titles at various events dating back to 2013.

That's a lot of achievements for one weekend, and it's clear Biles isn't slowing down anytime soon. And she's also not going to keep quiet. As the Championships were kicking off, Biles stood up for herself and other gymnasts by speaking out about USA Gymnastics as more information surfaces surrounding the Larry Nassar sexual abuse scandal. Expect to hear more from Biles and see more impressive moves from the Olympic gold medalist, especially next year as 2020 Tokyo Olympics approach.