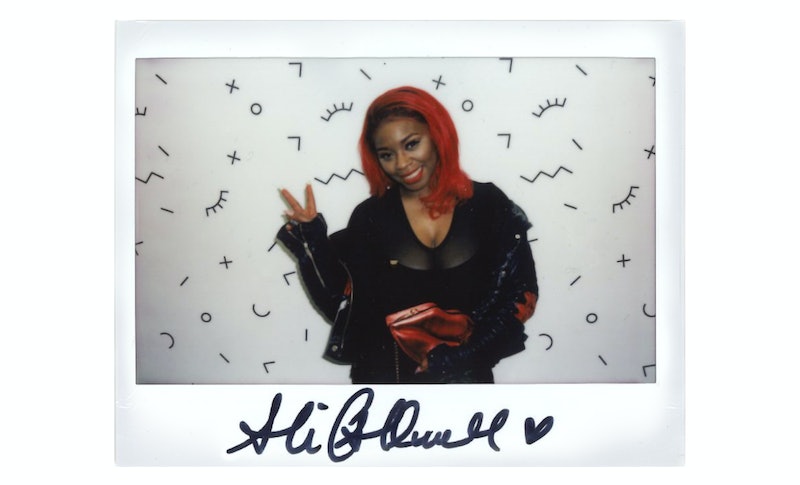 When celebrities hang out at Bustle, we want to give them the chance to leave their mark. Literally. So we hand them a pen, a piece of paper, a few questions, and ask them to get creative. The rest is up to them. This time, “Colors” singer Ali Caldwell is leaving her mark in the Bustle Booth.

If you keep up to date with The Voice or tuned into the second season of The Four, then you’re probably already a fan of Ali Caldwell. And between her vocal talent, her fly sense of style, and her admirable perseverance, it’s easy to understand why. Just take how, on Season 11 of The Voice, Caldwell's blind audition caused all four of the show’s judges to vie for her to be on their team. The singer chose to be coached by Miley Cyrus, and to this day, she tells me, she believes this was the perfect decision.

“I had a gut feeling it was going to go well because I wanted to do something different,” Caldwell reflects, sitting down at Bustle's New York office on a recent Friday afternoon. “I just felt like [Cyrus] had the answers that I was looking for and the song choices that I was looking for. I didn’t want to do anything that people would expect of me.”

Caldwell not only credits Cyrus for the unique song choices on the show that made her stand out from the rest of her competitors, but she also says that the “Younger Now” singer for gave her some of the most valuable advice she'd ever gotten. Noticing how much of a perfectionist Caldwell was, Cyrus instructed her, “Don’t overthink, get out of your head, and just be you.” These are words that she says she still keeps in mind when performing.

Although Caldwell finished in fifth place on The Voice, she continued on with reality TV series, competing on Season 2 of FOX's The Four. She made it far in the show, gaining plenty of fans along the way. Now, after all of this exposure, the singer says the biggest difference in her life is how often people recognize her while she’s out in public. It’s something that will take some getting used to, but ultimately she’s grateful that people have taken notice of her and her art. Says Caldwell, “[TV] put me in a brighter light, it put me in the conversations of people who can actually help take me to the next level.”

One of those people was P. Diddy, one of the judges on The Four. His positive reception to Caldwell's performance of “No More Drama”, a song he produced for his friend Mary J. Blige, was a huge moment for the singer.

“For him to say that Mary J. Blige would be proud of that performance and just basically praising the performance that I did, it was absolutely amazing," Caldwell says. “I was blown away, I couldn’t believe that he actually stopped what they were doing to verbally say that, and not just in front of me but in front of everybody that was in the building and the millions of people that were watching.”

Diddy even told her that she has one of the most amazing voices he’s ever heard. “I can’t even describe how that felt,” she says now, smiling from ear to ear.

When Caldwell stops by Bustle, she has just released her new single, “Colors," a track that, she says, has a deep meaning. “It’s basically talking about society,” she explains. “They basically force us to look at things as one way or another, it’s black and it’s white, that’s it. I just wanted to put the truth out there, it’s not just black or white. There’s so much beauty in all of us.”

The song is much more upbeat that those on Caldwell's last EP, Heart of Ballads. She explains that she wants her fans to see that there’s more to her than slow songs and ballads, and that she like to have fun and dance, so her new music reflects this. “Colors” will give her fans a taste of what they can expect from her debut album 88, which she says is expected to be released in June of next year.

For more on Caldwell, check out her Bustle Booth below.

More like this
Tacos Are Chef Kay Kay’s True Love Language
By Maxine Harrison
In Rap Sh!t, Social Media Has Main Character Energy
By Aramide Tinubu
Gabby & Rachel Reveal How That 'Bachelorette' Rose Ceremony Twist Happened
By Grace Wehniainen
Christina Perri Had No Idea Her 'Twilight' Song Is On YouTube's Top 100 Chart
By Radhika Menon
Get Even More From Bustle — Sign Up For The Newsletter