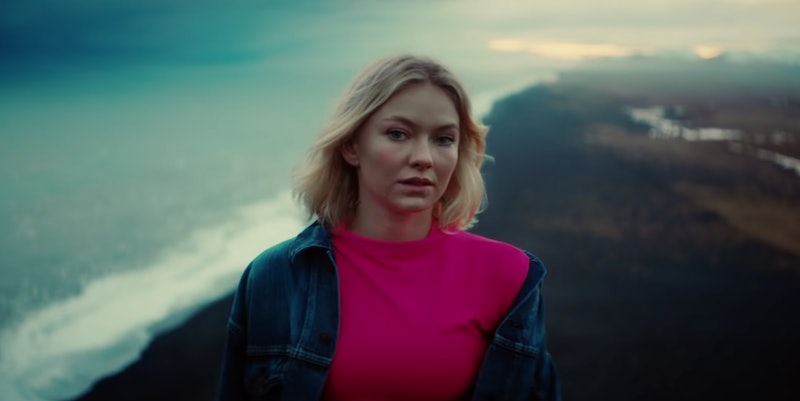 The name Astrid S might be familiar to you, but if it's not, then her music should be. This young singer has had some hits in the past, like "Hurts So Good," which has over 190 million streams on Spotify and was certified gold in America in April, not to mention certified three times platinum in her home country of Norway. She has appeared on songs with Shawn Mendes and Avicii, gone on tour with Troye Sivan, and she's currently working on her debut album. And she's ready for even more success with her newest single, "Someone New," an upbeat breakup track that Astrid S says she hopes it makes fans feel like a kid again.

Astrid describes her new song as "childish," but don't get it twisted, the singer tells Bustle over the phone, "Someone New" is "childish in a good way." She continues, "That's what I wanted to capture with the feeling and the sound of it because to me it's a very childish feeling," she says. The lyrics tell the story of a girl who is obsessed with the memory of her past love as well as his new boo, a state of mind that Astrid thinks is reminiscent of a childhood crush. "Being kind of hung up on your ex or someone you've dated and then you start getting paranoid and you stalk them," she says. "You feel like you're 12 years old."

The track opens with Astrid singing about her ex's new girlfriend, comparing herself to this new woman. "Bet she's beautiful and perfect, everything I'm not," she sings," before saying she's "talking like a psychopath." That type of focus on an ex is really the main theme of "Someone New." And it's something that everyone, no matter what age they are or where they are, can relate to.

"Someone New" was originally written by Charlie XCX and Noonie Bao, and Astrid told Pop Justice that it was the first song she ever made over e-mail. Astrid normally prefers to create music through conversations in the studio. "The best songs I find that I write it's just when I'm able to have really good conversations with someone in the studio, that makes a big difference," she tells Bustle. She continues:

"Cause I like my lyrics to be kind of conversational sometimes... When you have a conversation with a friend, that's how I'm able to put into words how I feel in the best way. So, I think those songs were just songs where we had good conversations in the studio and were able to just really put into words and describe the feeling and the situation I was in."

She hasn't performed in the United States in about 2 years, but will be making a return at the end of February with stops in LA and New York after three years away, as a sort of precursor to the release of her debut album. And of course, she's changed since then. The singer was about 19 the last time she was in the States, and now at 22, she's hoping to bring a new level of experience with her. "I've matured more and my music," she says. "And the shows, I'm doing them mostly because I just wanna play my new music and show my fans what I'm working on and give them a taste of the album."

There's no set date on when that album will come out, but she hopes it will be released by the end of this year or the next. "It depends on what songs I'm happy with and how fast I'm able to write and finish stuff," she says. And, when it is released, fans can expect to hear an eclectic record. The musician tells Bustle that she's inspired by a ton of different artists, from ABBA, to Queen, to Drake. It's part of the reason it takes her so long to perfect a final record. "I find making an album, it's hard to keep that right fit when it comes to genre and sound, because I'm so into so many different kind of songs," she tells Bustle. "But we'll see, I think people listen to music differently today than they did a few years ago, so I hope people are open to variety of the songs on an album."

If "Someone New" is any indication, when Astrid S does release her album, it's going to make her a pop star you'll want to be hearing more from.