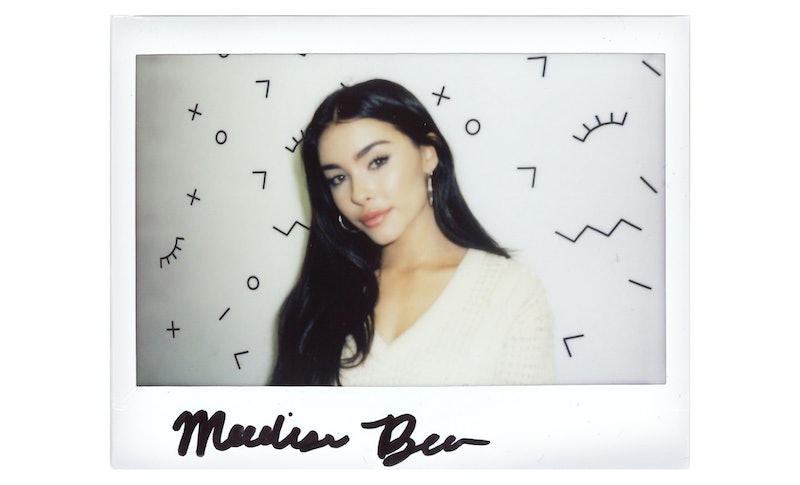 When celebrities hang out with Bustle writers, we want to give them the chance to leave their mark. Literally. So we hand them a pen, a piece of paper, a few questions, and ask them to get creative. The rest is up to them. This time, "Hurts Like Hell" singer Madison Beer is leaving her mark in the Bustle Booth.

It’s been six years since Madison Beer was discovered by Justin Bieber and signed to Island Records, but it wasn’t until February 2018 that she released her first EP, titled As She Pleases. Yet that long time frame was worth the wait in order to get things right, according to the singer. “I had a lot of the songs that are on the EP ready to go three years ago," Beer explains as we chat in Bustle’s New York studio. "But, yeah, I think that the best things take time so I really wanted to take my time with it and make sure it was perfect.”

Although Beer has been known in the past for effervescent, light-hearted tracks like "Melodies", the songs on As She Pleases, as well as the 19-year-old's recent single "Hurts Like Hell’" featuring Offset, have a much more mature, sultry vibe. “I feel like I've grown with my music taste and my ability to experiment a little bit,” she explains. “I think that I used to be a little more cautious and scared to branch out and try new things, and now I'm just kind of like, I'll do what I want.”

With this new sense of confidence, Beer has also been able to take much more creative control over her music and the videos that accompany her songs. “It's just so rewarding to see your idea come to life, and it's also rewarding to even just have a group of people who are so experienced in the industry actually trust your vision,” she says.

Beer led the charge for the visual concepts that led up to the Nov. 14 release of the "Hurts Like Hell" music video, which she also executive produced. The way that her face lights up as she talks about the song and video makes it evident that she’s proud of her work and development as an artist these past few years — and of her future plans. "I'm going to probably start directing all my videos,” she explains.

This new single is also Beer's first time having anyone feature on one of her songs, and she says that working with Migos' Offset was a pleasure. “I really didn't know what to expect but he was amazing, and he was so easy to work with and I adore him,” she says. “I think he's like one of the nicest guys I've ever met, truthfully.”

Beer also has a great relationship with her fans, many whom have been around since the very beginning of her rise to stardom. “It's so special,” she says of that connection. “I think that's been one of the perks of taking so long to put out an EP, because now I get to have these fans who I've known since we were 13 years old, that are now almost 20. And we have this crazy bond that I don't think that a lot of other people get to have with their fan base.”

There's no doubt that the EP will leave Beer's fans wanting more, and lucky for them, she's working on her debut album, which she says should be released in spring 2019. “Expect the unexpected," she hints of the upcoming record. "The sound is very new and very fresh, and it's something I'm very proud of.”

For more on Beer, check out her Bustle Booth below.