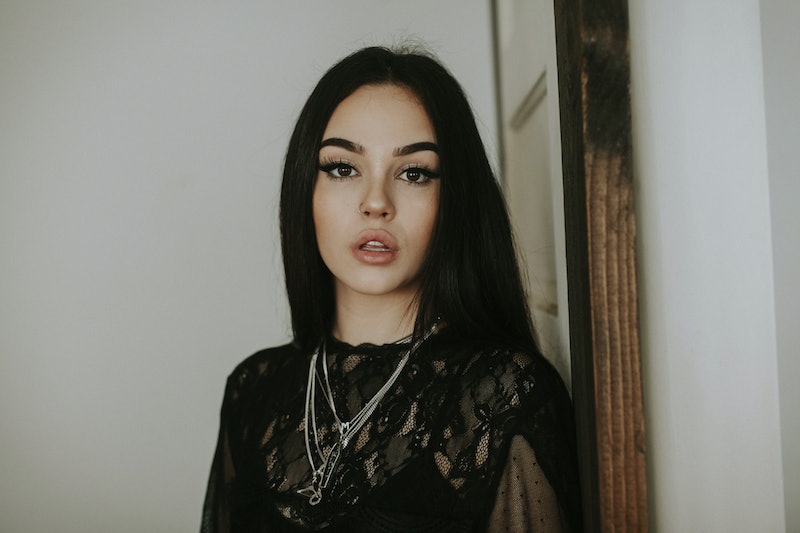 When I speak to pop star and internet sensation Maggie Lindemann, she's just a few days away from fulfilling one of her lifelong dreams of performing in Japan. Her voice is raspy, and the first thing she does is warn me that her new single, out Oct. 26, is different than anything she’s ever released. "Even my creative process has changed as I've matured," she confesses when we speak over the phone just three days before the new track drops. Drawing inspiration from like-minded female artists such as Lana Del Rey, Banks, and Billie Eilish, Lindemann says that these days, for her, "It's all about being real in your art, especially in this social-media obsessed world."

The maturity that Lindemann alludes to becomes self-evident after listening to "Human." “I’m very vulnerable in [this new song]," the 20-year-old explains. "When I was just starting out in this industry, I was still sorting out the person I wanted to become, and the music I was making at that time very much reflected that. Now that I’m older, I am finally making music that reflects the real me.”

"Human" indeed marks a noticeable departure from the singer's previous singles like "Pretty Girl" and "Obsessed," and it goes along with Lindemann's changing image. "I know I might look very sultry and dark on the outside, but I'm actually very happy, outgoing, and bubbly in real life," she explains. "I'm trying to be more honest online, especially as I grow into myself.”

She continues, "I think everyone can take away a different feeling from my new song, but it's about not feeling human. It's about feeling alone and like nobody really gets it."

These intentions are not only clear in the new song, but in the accompanying music video, which matches the track's tone and more mature outlook. It's also evident in the way Lindemann now uses her social media platforms, including her Instagram with over 3.1 million followers. Like her own evolution as an artist, Lindemann's social media has changed dramatically since her start a few years back.

“It’s funny, I didn’t even upload the video that would eventually get me ‘discovered,'" she recalls. "I just sort of posted what I wanted on Tumblr growing up, and a video of me singing ended up getting uploaded [by a fan] onto YouTube, and then the next thing I knew a manager was emailing me, and I was being moved to Los Angeles. I was only 16 at the time, and although very scared, I was also filled with so much excitement that it was hard to feel much else."

Moving to LA at that age certainly wasn't easy. Explains Lindemann, “I feel like most teen girls at 16 years old have their parents and their school friends guiding them through different experiences, but since I moved here alone to pursue my career, I kind of just grew up as fast as possible on my own."

And social media likely didn't help. "I think growing up in general has changed a lot even since I was younger," says the singer. "People are so photo-shopped and altered these days, especially on Instagram. I remember literally posting whatever I wanted on Tumblr, but now there is such an immense pressure to look a certain way all the time. This has made even me become more hyper-aware and that much more intentional in how I use my own social platforms.”

She also notes that young girls are held to a different standard than anyone else on social media. "Well, you know if a boy posts a topless shirt, no one says anything. But if a girl does the same thing, people are so quick to judge her and even slut-shame her. It is so frustrating," she says. This double standard extends beyond just social media. Adds Lindemann, "I think young girls are still sometimes overlooked when it comes to even just their ideas. The notion that young girls don’t have real point of views is so dumb. Wake up already! Especially right now, more than ever girls are taking over the world, and I'm so proud of to be part of it."

Up next for Lindemann is the performance in Japan, as well as other exciting opportunities. However, as successful as she gets, she still faces the same issues as so many of her peers. "I wish for young girls everywhere to really just embrace the person they are and never try to be someone else," she says, and it's clear that this isn't just a wish for others, but something that she has to reminds herself of often. Before we end our conversation, she tells me to look out for her in the years to come, promising me that she will always stay true to herself because, after all, "that’s how all the best art gets made.”