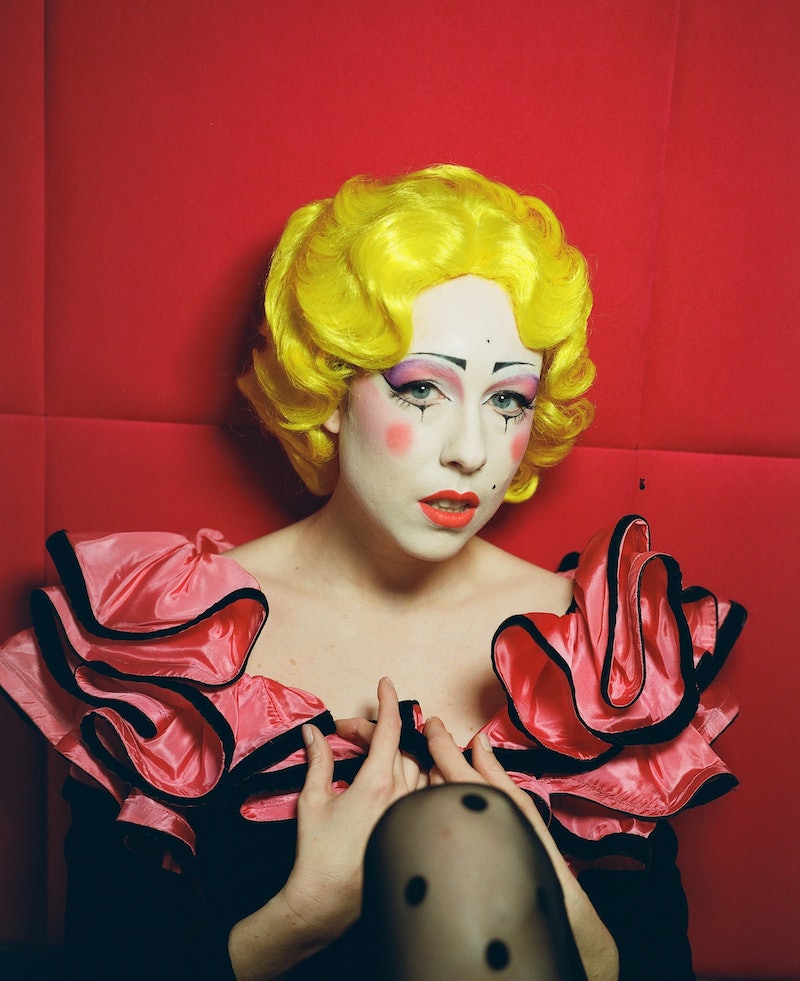 Canadian singer-songwriter Alexandra Ashley Hughes, known as Allie X, confidently introduces herself as “a proud weirdo” in a yellow wig, and polka-dot fishnets when we meet on Oct. 26 at V Magazine's Halloween Party. Known for viral pop hits like "Catch" and "Bitch," collaborations with Troye Sivan on his album Blue Neighbourhood, and the sultry ballad "Sunflower" at the center of Netflix's Sierra Burgess Is A Loser, Allie X has a vibrant energy that follows her as she moves through the party. Her new album, Super Sunset, is coming out just a few days later on Oct. 29, and the star tells me how new body of work is like nothing that’s ever existed in the pop world before. She sums up the album in three words: “glamorous, grotesque, and grainy."

Throughout the album, eclectic and ambient sounds accompany the singer's poignant words, painting a vivid picture of what it’s like to navigate a city as a female artist. This directness is new for Allie X, who describes Super Sunset to me as "a conceptual mini album about [her] years in Los Angeles," based on her true experiences, which she then "exaggerated, heightened, and stylized as if [she] was directing a Hollywood movie about this specific time in [her] life." She even conceptualized most of Sweet Sunset's "It's Not So Bad In LA", a track that would eventually be the centerpiece of the album, on the way to the dry cleaners. After this pivotal moment, she realized "that [she] used the actual words Los Angeles, and [she] was just kind of like, OK! I guess this is what this damn record is about. Let’s commit to that."

Allie X credits like-minded female musicians with singular points of view, like Kate Bush and Cindi Lauper, for inspiring her on this new work. And although these sounds may resonate differently than her past hits, she tells me that her new music is still just as deeply personal. "Right now I would say I'm most inspired by other pop weirdos, my fans, and queer culture in general," she explains.

Of course, there are differences on this new record. Says the star, "as a writer and a producer, my music continues to evolve as I learn more and my tastes change. I also still have so much more to learn which is both a blessing and a curse." Her work, at its core, is about her evolving definition of her own personhood. She explains, "I’ve learned a lot about myself and changed a lot since I started [in the industry] four years ago, and I think my evolution as a person is very evident in my art.”

Allie X's process of becoming is not only apparent in her work, but also in the way she presents herself aesthetically. She moves with confidence, and her clothes help reinforce an assertiveness over the space around her. When I ask about her style, she happens to be appropriately playing with her fishnets, but stops to declare that “[her] aesthetic is ever changing." She twirls and turns before pausing to add, "I just love to play with the juxtaposition a lot. I love images that provoke two feelings at once, or images that exist in-between two contrasting worlds in some way.”

It's clear that the singer's style and artistic process are inseparable from each other, boundlessly inspiring her art and her becoming. When asked about her upcoming plans — the next stage of her evolution — she tells me that she wouldn't necessarily want to know what the future has in store for her, if given the option. She admits that she would love to collaborate with Carly Rae Jepsen, but also wants to keep exploring herself both aesthetically and artistically in the years to come. She ends our conversation by telling me, "existing is already tough and scary, but embedded in all of these fears is a genuine excitement to be alive, listening, and learning.”

As she leaves our conversation, she walks away and disappears into a sea of celebrities all dressed up and disguised in various bold halloween costumes. In a matter of seconds, all that can be seen are small remnants of Allie X's yellow wig peering out from the night sky.

More like this
Christina Perri Had No Idea Her 'Twilight' Song Is On YouTube's Top 100 Chart
By Radhika Menon
The Real Meaning Behind Marcus Mumford’s “Cannibal” Is Actually Really Dark
By El Hunt
At 14, D'Arcy Carden Was Sneaking Out To Parties & Crying Over Kurt Cobain
By Ivana Rihter
In Rap Sh!t, Social Media Has Main Character Energy
By Aramide Tinubu
Get Even More From Bustle — Sign Up For The Newsletter