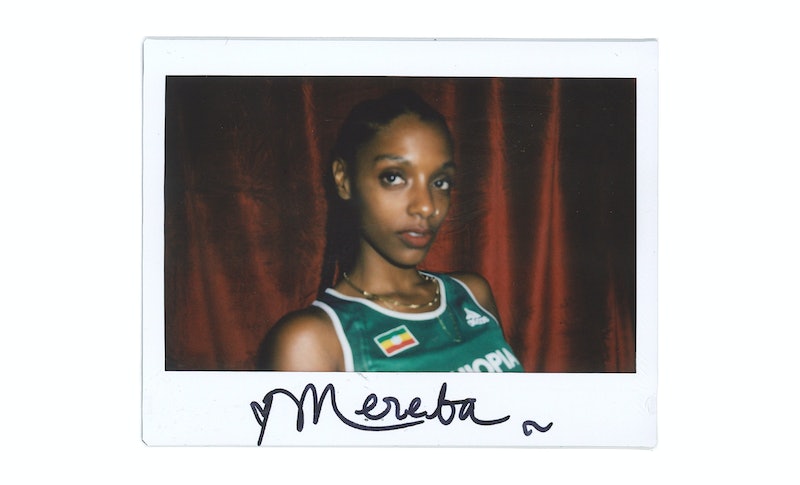 When celebrities hang out with Bustle writers, we want to give them the chance to leave their mark. Literally. So we hand them a pen, a piece of paper, a few questions, and ask them to get creative. This time, singer, songwriter, rapper, and producer Mereba is leaving her mark in the Bustle Booth.

My conversation with Mereba quickly becomes one about influences. It's hard to listen to her debut album, The Jungle Is the Only Way Out, without wondering where her seamless blend of hip-hop, R&B, and folk originates from, and Mereba seems to know this herself.

"My sound is a smorgasbord of things," she tells me as we talk in the Bustle studio, "because it’s just, like, everywhere I’ve been, and it became a part of my identity."

"Everywhere" includes Philadelphia, Greensboro, Atlanta, and Ethiopia — Mereba moved all over as a child and took a bit of each new place's sound with her when she left: soul music from Philly, folk music from Greensboro, hip-hop from Atlanta. "When I was growing up, I was more shy and just quiet, so I would observe a lot," she remembers. "And by the time I would get to the music, I would have absorbed where I was and what I’ve experienced there." Case in point: she shows up to the Bustle offices wearing a green Ethiopia jersey.

That isn't to say that each move was smooth sailing. In fact, a lot of Mereba's early inspiration came from "angst mixed with that feeling of just … being uprooted. It forces you to express. In one way or another."

For Mereba, however, expression isn't simply singing. She led just about every step of making The Jungle Is the Only Way Out, from writing to producing to singing and rapping. "It’s really important... because it’s like a language to me," she says when I ask about her deep involvement in the creative process. "I struggled with communicating in other ways, but that was always my way of communication."

On The Jungle Is the Only Way Out, Mereba is — intentionally or not — now using her own influence to communicate with her audience. Take "Heatwave," a collaboration with 6LACK, for example: the song tackles the subject of police brutality against black people in America, and includes stories from Mereba's own experiences. It can be difficult for black artists to simply share their personal stories without their art being labeled as political or as having an "agenda," something Mereba recognizes. She compares her approach to that of NWA, another influence of hers: "They were very political in their music," she says, "but they were also just speaking about what it was like to live in Los Angeles at that time. And so, me and 6LACK, I feel like we were just speaking about living in Atlanta. ... That’s just the reality that we’ve experienced."

She adds, "I definitely think that there was intention behind it to also make sure that song was on my project because of the other side of it. I want to shed light on this, I want to include this in my story because it’s a very real part of my everyday life."

This isn't the only community Mereba wants to shed light on, however — she's also been vocal about her appreciation for other women in the music industry, and spends several minutes gushing to me about female artists she's loving right now (her favorites include Arima Ederra, Kelsey Lu, and Yung Baby Tate). She's also noticed, however, that the music industry isn't always kind to women — an observation that may have been catalyzed through her time at Spelman College, both a women's college and HBCU. She says that during college, she had "the awareness of [how] this [women's college atmosphere] is beautiful, but this isn’t how the world is for us. When we leave this, it could get really tough, you know? You could go into spaces where you’re the only one of you. And it was this very nurturing space to set a foundation for adulthood."

Mereba hopes to create a similarly nurturing space herself, explaining her plans to start a collective for women in music. "It’s how movements happen," she says. "We all were on our own in our small bubbles, but we had similar ideas about where things could go for women in music, and I think ... the seeds have been planted and now we’re starting to sprout up. ... It’s like, oh, dang, we can do this ourselves too. We’re in control."

I, for one, can't wait to see what the music industry will look like with Mereba at the helm.

Get to know more about Mereba in her Bustle Booth below:

More like this
'Grey's Anatomy's New Intern Got Advice From Dr. Bailey Herself
By Grace Wehniainen
On 'The Handmaid’s Tale,' Christine Ko Fights Back
By Gretchen Smail
Everything To Know About Taylor Swift’s 10th Studio Album, 'Midnights'
By Grace Wehniainen and Jake Viswanath
Wallows Want Their Own Epic “Lizzo Flute Moment”
By Jake Viswanath
Get Even More From Bustle — Sign Up For The Newsletter