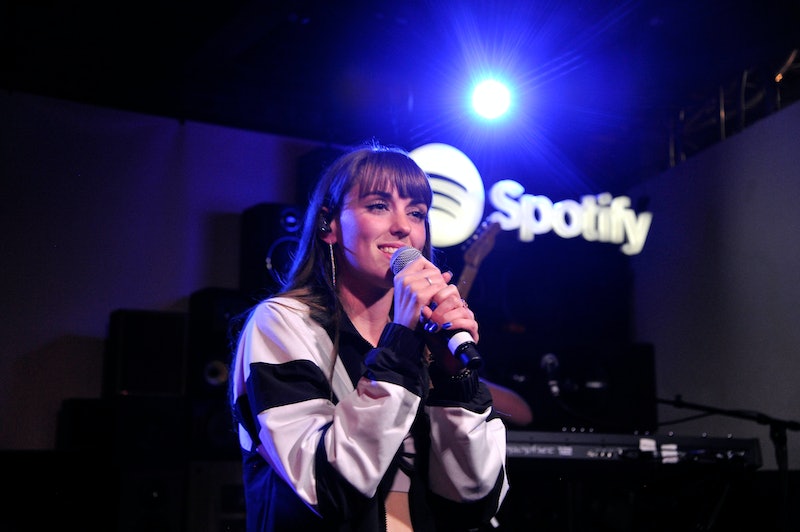 Are you still obsessed with Camila Cabello’s 2017 single “OMG”? Has Tinashe’s “Faded Love” been on repeat for the past few months? Do you have to listen to John Legend’s song “A Good Night” before heading out Saturday evening? If you answered yes to any of these, then you owe a big thank you to singer/songwriter Sasha Sloan, who has co-written these hits and many more over the past few years. These days, though, she’s busy releasing projects of her own like her new EP Loser, and she tells me there's a big difference between writing songs for herself and writing for other high profile singers.

“When I work with other artists, I’m just there to help them and help their vision,” she explains when we chat over the phone. “I’ll just take a backseat and talk about their life and what they’re going through, and we’ll write about that.”

And there's a big distinction in the tone of the tracks, too. “It’s pretty easy to tell when a song is for me or another artist because mine are all pretty sad,” Sloan says, laughing. Many of the songs that she has co-written for other artists are upbeat, lighthearted, and energetic, a stark contrast to her own debut EP sad girl, released in April 2018. Sad girl recounts tales of heartbreak and disappointments, and it's filled with self-reflection.

“I think I have a hard time talking about my issues, just speaking about it, but whenever I write it just kind of comes out through that," Sloan explains. “And it’s much easier for me to express how I’m feeling through lyrics and songs.”

Sloan laughs when she addresses how slow her songs usually are, joking that, “I’m sure no one wants to listen to six ballads in a row, including myself.” So for Loser, released at the end of November, Sloan made sure to find a smooth balance between the raw authentic lyrics that her fans have grown to love her for and a more energetic and fun sound.

Making sure her fans enjoy her new work is, understandably, extremely important to Sloan. “It’s therapeutic for me to see people connect to it," she says, adding, "that makes me feel a little less crazy.” When we talk, it happens to be only one day after her first show as a headlining act — ever — and “just to have people out there" who "really seem to resonate with what I’m saying," says Sloan, was a great experience.

And so are the other reactions from listeners she's received. Explains Sloan, “It’s cool to get DMs that are like, ‘this song really helped me through a breakup’ or, ‘this song helped me feel better about how I’m feeling right now,"

As she continues to tour, she expects for her performances to improve over time, just as her songwriting skills have. But for now, she’s enjoying the journey and her growing fandom. Says the singer, “I just didn’t expect anyone to listen to my music except for my mom, so it’s been really great.” Safe to say her mom's far from the only person excited to see what's next.