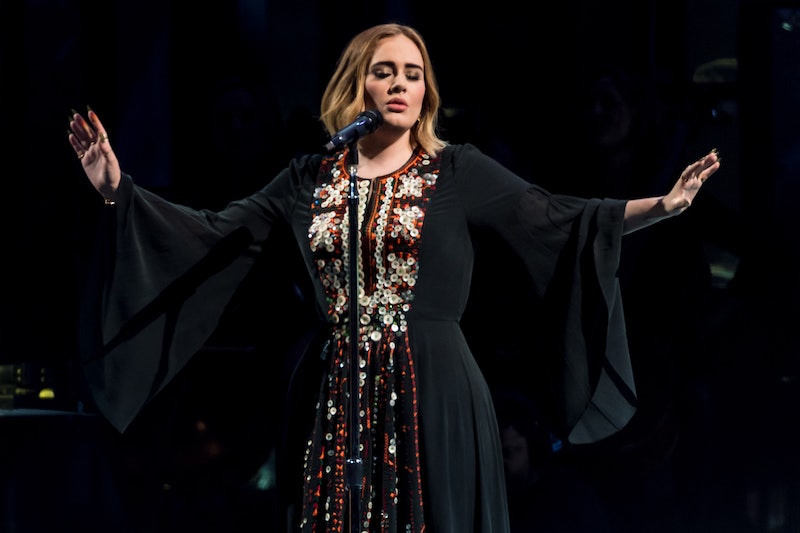 Earlier this week, Adele posted two photos reliving her famous 2016 Glastonbury performance, which aired again on BBC on Saturday evening. In true Adele style, the singer squatted in sweats by the TV while holding a fan, the caption read "5 ciders in." She also threw on her performance outfit and danced to her own show — totes relatable. The posts have over 4 million likes and more than 30,000 comments, yet one has caught the attention of eagle-eyed fans. UK rapper Skepta left a comment on the post, reigniting romance rumours between the pair and sending fans into a frenzy.

"Finally found your Instagram password lol, " wrote Skepta underneath the post, playfully poking fun of the singer's general lack of Instagram action. The notoriously private Adele only responded with emojis, but it still fanned the flames of romance rumours.

The pair were first said to be dating back last year following Adele's split from husband Simon Konecki back in April after eight years together.

While neither Skepta or Adele have revealed any details of their relationship, romantic or otherwise, they've shared a public, positive friendship. They both hail from Tottenham in North London and of course have mutual connections in the music industry. In 2016, for example, Skepta told ES Magazine that Adele is a positive force in his life: “Adele texts me all the time and keeps me in check. She speaks to me about how things are going," he explained.

Rumours of the pair's friendship progressing into something more started in The Sun, where it was reported that Adele attended Skepta's 37th birthday celebrations at The Crystal Maze. A source told the tabloid: "They have a close bond and there’s definitely a special connection. Some of their friends are hoping and predicting they could end up being a great couple one day."

Fans seem to be rooting for a duet, with one Instagrammer writing under Adele's post: "secured King and Queen"

Aside from the singer's relationship status, Adele was also pressed about new music. The Grammy winner's last album, 25, was released in 2015 and fans had anticipated a new album for 2020.

As once person commented: "Yep, you're definitely releasing something soon, and I'm SO ready".

Yet Adele has urged everyone to be patient for the new album, especially considering the current climate.

"Of course it’s not,” the singer wrote back. “Corona ain’t over. I’m quarantining. Wear a mask and be patient."