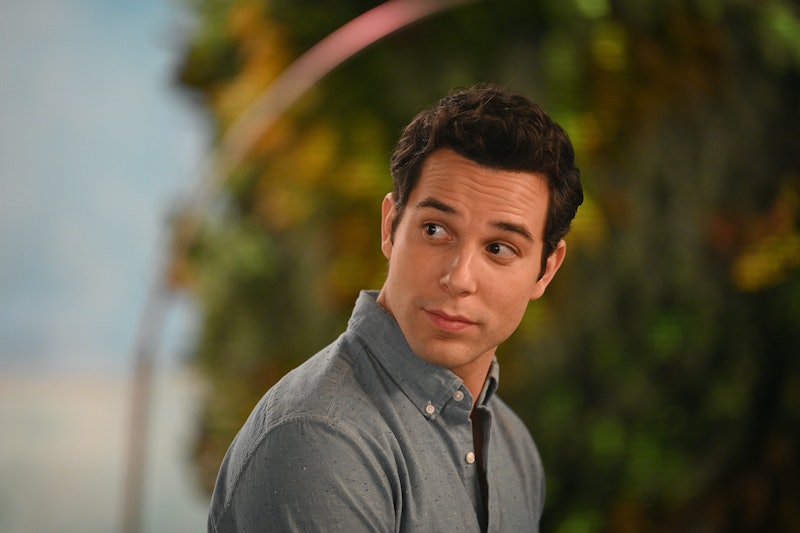 The Barden Bellas and Treblemakers are reliving their acapella glory days from the set of Pitch Perfect, and fans can't aca-believe it. Skylar Astin shared a vintage Pitch Perfect rehearsal video, which was taken before the 2012 film started shooting, on his Instagram for Throwback Thursday on April 9. And it's the perfect thing to reignite our hopes for a fourth movie.

In the video, the Zoey's Extraordinary Playlist star is seen with his fellow Barden Treblemakers rehearsing for the film's final number, which kicks off with his rendition of Cee-Lo Green's "Bright Lights, Big City". In the movie, Ben Platt comes on stage next for an awe-inspiring take of B.o.B's "Magic," but as explained by Astin in the caption, the actor was in a fitting at the time, so the role of Benji was filled in by dancer named Binky. And their moves throughout were (almost) as clean and precise as in the film.

Astin was actually inspired to post the never-before-seen clip by fellow Pitch Perfect star Rebel Wilson, who shared some rehearsal footage of her own. But unlike Astin, she was practicing the moves on her own in preparation for her show-stopping solo dance, which fits with today's coronavirus pandemic, really. "Social distancing dancing is not as fun as doing it with all the Bellas," she captioned the post.

As evidenced by the comments on her post, Wilson's co-stars were loving the nostalgia just as much as the fans. "Purple shirt day! Wait. Where did we all go?," Brittany Snow lovingly asked, as reported by E! News, and Ruby Rose sweetly commented, "God I love you dearly."

Ever since the release of Pitch Perfect 3 in 2017, the cast have reunited on their own several times, and virtually all of them are onboard with making another sequel. "I mean, I can't say anything officially, Ellen," Wilson said on The Ellen DeGeneres Show in October of 2018 about whether a fourth movie was in the works. "But we just love each other, all of us girls." Hailee Steinfeld is in agreement, as she told Andy Cohen on Watch What Happens Live! in November 2019. "If there is a fourth, that would be news to me and very exciting news," she teased.

If anything, these throwbacks proves that the cast is just as eager to film a sequel as the fans are — this time with the Treblemakers, who were sadly absent in Pitch Perfect 3. Make it happen, Hollywood.