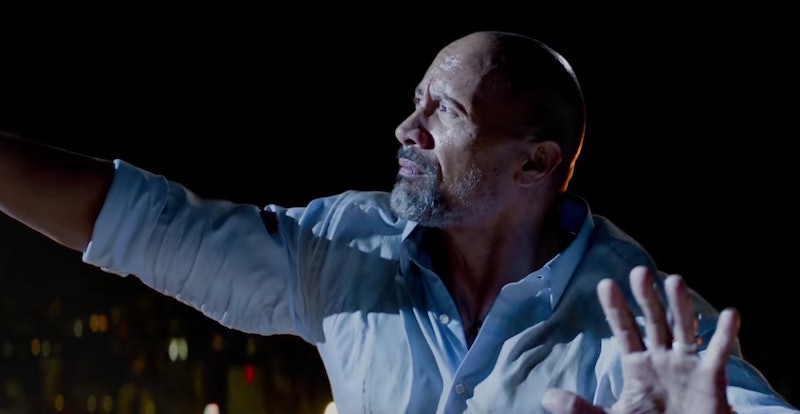 These days, the action movies that reign supreme in the box office often focus on men valiantly rescuing their families from disaster. The just-released Skyscraper, starring Dwayne "The Rock" Johnson, is one such film, all about a man trying to save his wife and kids after they get trapped in a burning building. Yet while the movie features many of the tropes found in similar films, Skyscraper is about a dad who has always been there for his kids — rather than one stepping in only when disaster strikes, which is what's far more frequently depicted on-screen.

Skyscraper follows William Sawyer (Johnson) a former FBI agent who loses his leg in accident while on the job. Years later, William and his wife, Sarah (Neve Campbell), travel to Hong Kong where William hopes to get work as a security advisor for the tallest building in the world, The Pearl. Before William goes off to meet with the building's owner, he asks his kids, "Daddy loves who?" They respond on cue, "Me!," in a rehearsed-sounding way that makes it clear it's far from the first time their dad has professed his love for them. And in several other scenes early on, William acts lovingly towards his family, showing how much he cares about his kids and their well-being.

While this might not seem like a big deal, it is. It's pretty rare for a father in a major movie to be present in his kids' lives before the drama and action start going down. Just take films like 2015's Daddy's Home, about a father (Mark Wahlberg) and step-father (Will Ferrell) competing to be the better dad once the former shows up after being absent for years, or 2007's The Game Plan, which follows a guy who doesn't even know he has a daughter until she shows up at his doorstep at eight years old.

Or, look at the other movies out in summer 2018, like Incredibles 2, which presents a father who only steps up to take care of his kids when he has to. Netflix, meanwhile, has two movies coming out this summer, Like Father and Father of the Year, that both deal with dads only stepping up when forced; Like Father sees an adult woman and her dad reuniting after being estranged, while Father of the Year follows a dad attempting to make things right with his son after a series of mishaps. Then there's Searching, out Aug. 3, about a father (John Cho) who learns that his daughter is missing and attempts to use her computer's history to locate her. It turns out that he doesn't know much about his daughter's life since they don't live together, but he still does whatever he can to find her and save the day.

On their own, these movies might seem innocent enough, but they perpetuate a tired trope — that dads are only present in their kids' lives once trouble hits or something drastically changes, and that they're less naturally nurturing or present as moms. It goes way back to the era of movies like Taken, which saw a retired CIA agent and relatively absent father swoop in to save the day when his teen daughter went missing. Of course, not every real-life dad has the best relationship with his kids, but it's unfortunate how uncommon it is for movies to show dads who show up for their kids before sh*t hits the fan.

Which is why Skyscraper is so significant. All throughout the new movie, William is framed as a loving and present father who is always motivated by his family, not just when trouble starts. When he discovers that they're trapped inside the Pearl while it's under attack, he takes extreme risks to save them — including jumping from a crane into the building from hundreds of feet in the air — but it feels totally in character, since audiences know his history of stepping up.

It's time we say goodbye to movies that reinforce stereotypical gender roles that place parenting responsibilities on a mother while allowing dads only come in at the last minute and save the day Skyscraper's William Sawyer is a new kind of hero — not just because of all the extreme physical challenges he overcomes to rescue his kids from a burning building, but because of the way that he shows up for his family at all times.