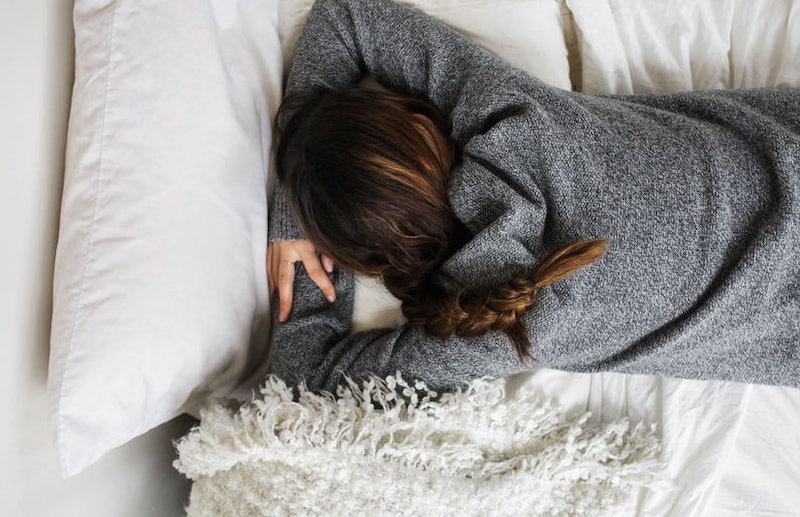 Anyone who's succumbed to a late-night Netflix marathon, only to stumble into work at 8 a.m. the next day, will vouch for the effect a lack of sleep can have on your brain function. But it turns out the impact of sleeplessness goes deeper than a double espresso or two can solve. According to a study by scientists from Michigan State University, sleep deprivation causes distraction and memory problems — or more specifically, it has a significant impact on our ability to recover from distraction, as Forbes reports. That might be problematic enough if you're working in an office, for example, and you lose your focus after the phone rings. But what if you're a surgeon, or you operate heavy machinery, and your distraction could cost a life?

The study, published in the Journal of Experimental Psychology, looked at the ability of its subjects to complete a task accurately after being distracted mid-way through. According to Forbes, over 230 participants were asked to complete a multiple-step task at night, in a lab. "They were occasionally interrupted from their work, after which they had to recall where they were and resume the correct order from that point on," Forbes says. After the task, half of the subjects were allowed to go home to sleep, while the other half were required to stay awake in the lab. The next day, the participants completed the task again.

The findings? 15% of the subjects who stayed awake were "unable or unwilling to achieve a modest level of accuracy that they were instructed to achieve and were able to achieve the evening before," while only 1% of the subjects who were permitted to sleep suffered a similar decline in performance. The study says that among the sleep-deprived, "error rates were elevated, and errors reflecting memory failures increased with time-on-task."

Study author Kimberly Fenn told Forbes, "If you look at mistakes and accidents in surgery, public transportation and even operating nuclear power plants, lack of sleep is one of the primary reasons for human error," adding, "There are many people in critical professions who are sleep-deprived. Research has found that nearly one-quarter of the people with procedure-heavy jobs have fallen asleep on the job."

Those awaiting surgery should look away now: Fenn told Forbes, "Every day, approximately 11 sponges are left inside of patients who have undergone surgery, adding, "That’s 4,000 potentially dire missteps each year." The study concludes, therefore, that "sleep-deprived individuals should not perform procedural tasks associated with interruptions and costly errors, or, if they must, they should perform such tasks only for short periods."

More frightening psychological impacts of sleep deprivation? Another study by Kimberly Fenn, published in the Proceedings of the National Academy of Sciences, found that those deprived of sleep for 24 hours were 4.5 times more likely to sign a false confession, compared to those who'd slept for eight hours the night before. And a 2014 study, published in Psychological Science, found that lack of sleep could "increase the risk of developing false memories."

Add all this to the well-documented physical impacts of sleep deprivation, including heart disease, high blood pressure, and diabetes? You might start to prioritise your sleep a little more.