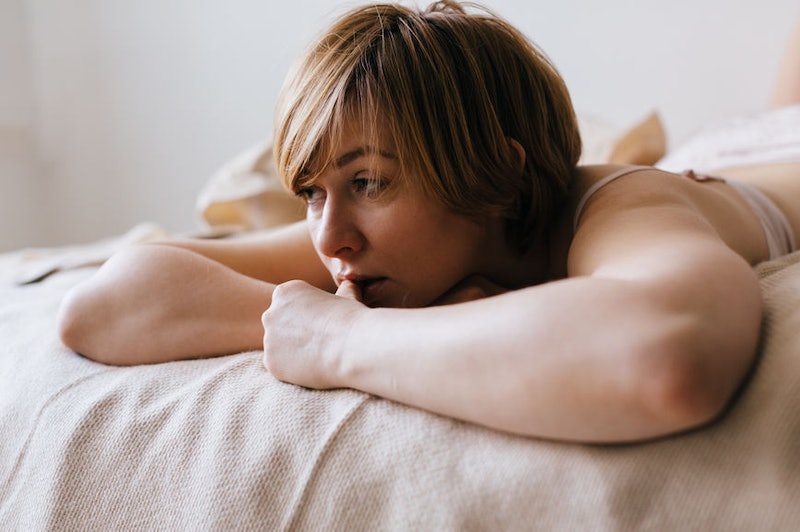 Remember the last time you had a rotten night's sleep, and it made you feel tetchy, irritable, and down? The link between sleep deprivation and depression is nothing new, but a recent study published in JAMA Psychiatry reveals a new scientific link for the first time, and offers a glimmer of hope that scientists may one day have the tools to develop treatments that will help sufferers break out of the vicious circle of sleep-deprived misery for good. And with insomnia statistically affecting more women than men, this is especially great news for us.

Researchers at the University of Warwick and Fudan University in China analysed the data of 1,017 people between the ages of 22 and 35 — 53.7 percent of whom were women — and identified a neural link between depression and sleep, opening up the possibility of sufferers receiving more targeted treatments. Results showed that 162 functional connectivity links in the brain were connected with our ability (or lack of) to get some shut-eye; of these, 39 were also linked to depressive problems — such as low self-esteem, low mood, and a lack of motivation.

The crossover here goes some way to proving that sleep and depression are affected by similar parts of our brains — and suggests it is this link that causes us to feel down and more susceptible to mental health problems when we suffer from a lack of sleep.

Drs. Jianfeng Feng and Edmund Rolls, who headed up the study, stressed the significance of their conclusions to Sleep Review, with Rolls stating that the results are likely to have "implications for a deeper understanding of depression," as the evidence highlights "a key brain area that might be targeted in the search for treatments."

In the same article, Feng spoke of how widespread problems associated with insomnia and depression are, with "more than a third of the world's population" being affected. Meanwhile, he flagged that insomnia has risen to be the "second most prevalent mental health disorder," which he puts down to "longer work hours and commuting times, later night activity, and increased dependency on electronics."

Statistics on the Mental Health Foundation website state that depression and anxiety affect 7.8 percent of people in Britain, while 4 to 10 percent of the population in England will experience depression in some form or other in their lifetime. So, whatever it is you're going through, remember you're not alone.

Just how much sleep is enough? The National Sleep Foundation recommends seven to nine hours for those between the ages of 18 and 30, but it is estimated that two-thirds of us are not getting enough sleep on a nightly basis, Business Insider reports. That deficit, according to Matthew Walker, author of Why We Sleep, will have a detrimental impact not only on our mental health but on our physical well-being, too.

Where this will all lead is yet to be seen, but in the meantime, experts on the NHS website advise cutting back on caffeine (in the day, not just before bed), avoiding large meals in the evening, and taking time to exercise regularly. If you're lying there feeling frustrated, try getting up and reading a book — or doing something that relaxes you — and then returning to bed.