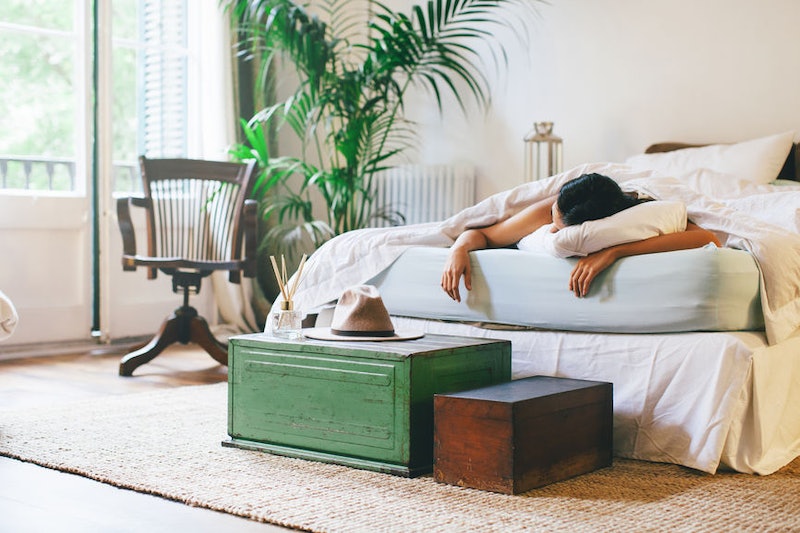 They say separation makes the heart grow fonder. There is nothing quite like missing someone to make you appreciate them when they are there. However, a new study suggests you take things one step further. According to this study, couples who sleep apart have more sex. As lovely as snuggling down with someone at the end of a long day is, the findings of this survey suggests that if you set yourself up in a different bedroom to your partner, it won’t necessarily be detrimental to the intimacy between you. In fact, it could greatly improve things.

A nationwide study conducted by bedding company Bensons For Beds found that, while some couples reported that sleeping separately meant they had less intimate moments (24 percent), 34 percent of people who said they slept in different rooms to their partner have better quality sex — and more of it. In addition, 38 percent said sleeping apart improved their relationship overall and 16 percent went as far as to say that sleeping separately spiced up their sex life so much they had taken to getting intimate in different rooms in the house. Who knew that setting up the spare room could be such a sex game changer?

The study was conducted all in time for 22-28 April, which marks National Stop Snoring Week — yes, that’s a real thing. Of the 40 percent of British couples who reported to sleeping separately, 51 percent said it was because of their partners' snoring.

Researchers found that almost three quarters (74 percent) of Brits have a partner who snores in bed, with 45 percent claiming to be regularly woken by the sound, and 37 percent having been forced to wake their other halves up in the night because of their noisy snoring.

While kipping down in different rooms seems like a dramatic step, it would seem that snoring is no laughing matter for some couples. In fact, it is a source of a lot of problems. Benson for Beds found that 32 percent of those surveyed said their partner had denied that they snored, which is likely to cause some riffs, and 25 percent admitted to actually recording their other half for solid proof. An exacerbated 23 percent of respondents said they had hit their partner in the night because they were snoring, and 18 percent said they are at their wits end because of it. There is little wonder that if you are having night after night of no sleep you aren’t exactly going to want to get down and dirty.

The problem is so serious for some that eight percent of couples claimed they were less attracted to their partner because they snore, and five percent even considered leaving them. The spare room (or the sofa) might not be only be improving sex lives — it could be saving relationships.

Speaking about the study in a statement sent to Bustle, Helen Nunn, Head of Marketing at Bensons for Beds said:

“Sleep contributes to so many things in life. We recently found that Brits only get an average of five hours and 48 minutes’ sleep daily, so it’s no surprise that couples want to focus on their sleep routines to improve their relationships and day to day lives.”

While it would appear that the benefits of sleeping separately are clear, it still isn’t for everyone. The research found that 36 percent of Brits said they would never sleep apart from their partner because they would miss them. Plus, 25 percent said they think it would mean they are less connected and 35 percent said they thought it would have a negative impact on their relationship.

Every relationship is different, but finding a sleep routine that works for both of you is a wise idea, in my opinion. So, if you're not getting the shut eye you need, why not try out some different sleeping arrangements and see where it leads you?

More like this
GIRLI & Q Fell In Love At A Skatepark & Never Looked Back
By Jessica Morgan
Jess & Anya Are The High School Sweethearts Who Gave Love A Second Chance
By Jessica Morgan
5 Ways To Stand In Solidarity With Women In America From The UK
By Sophie McEvoy
The UK Abortion Laws In 2022, Explained
By Sophie McEvoy
Get The Very Best Of Bustle/UK