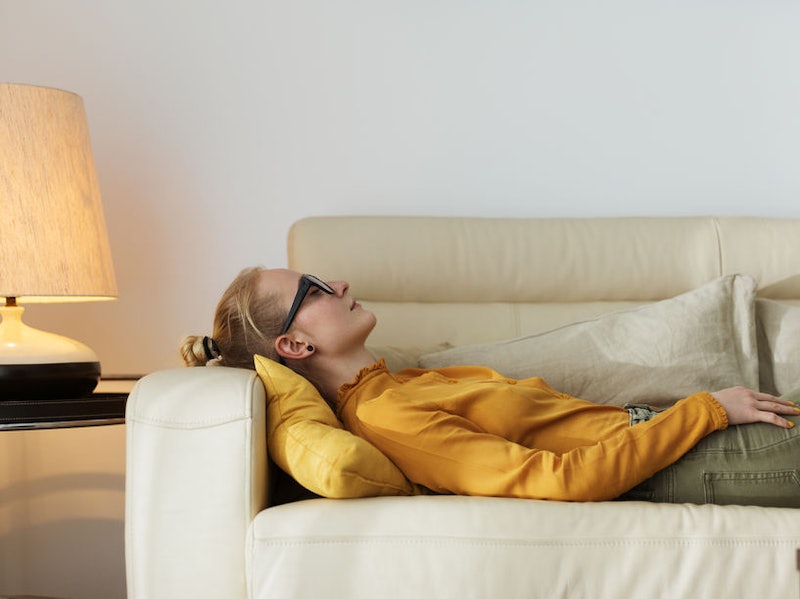 There are plenty of perfectly valid reasons to take a nap: You're a little bit sleepy. Your bed is a tiny paradise. Your elderly cat needs company. But a new study has demonstrated that taking a short nap can benefit brain function; specifically, "sleeping on it" actually helps you to process information you hadn't previously consciously perceived. Hear that, nap critics? Turns out there's nothing lazy about about a midday snooze.

Researchers from the University of Bristol worked on the hypothesis "that a short bout of sleep facilitates processing of even unconscious information" — or, in simpler terms, they looked into whether taking a nap could help you to understand or figure out something you hadn't worked out before. As EurekAlert! reports, the study, published in the Journal of Sleep Research, concludes that "information acquired during wakefulness may potentially be processed in some deeper, qualitative way during sleep."

The researchers asked 16 participants to undertake two tasks: the first, a word-response task that contained "implicit cues" or masked information, and the second, a control task that required participants to respond when presented with red or blue squares. The subjects were then divided into two groups; one group took a 90-minute nap while the other remained awake, before both groups performed the tasks again. Researchers measured the brain activity of the participants throughout the experiment.

After taking a nap, the participants responded faster to the task with masked information, while their response times during the control task remained the same. According to study authors Dr. Liz Coulthard, a senior lecturer at the University of Bristol Medical School, and Dr. Netasha Shaikh, a research associate at the university's School of Clinical Sciences, this indicates that the subjects processed the implicit information presented in the task while they were asleep. Dr. Coulthard explained, "The findings are remarkable in that they can occur in the absence of initial intentional, conscious awareness, by processing of implicitly presented cues beneath participants' conscious awareness."

Scientists have previously demonstrated the impact of taking a nap on everything from memory to mood. As the Independent reports, a 2015 study published in Neurobiology of Learning and Memory suggested that a 45- to 60-minute nap could result in a five-fold improvement in memory. Study supervisor Professor Axel Mecklinger, of Saarland University in Germany, said, "A short nap at the office or in school is enough to significantly improve learning success." He added, “Wherever people are in a learning environment, we should think seriously about the positive effects of sleep."

Researchers from the University of Michigan, meanwhile, looked into the effects of sleep on impulsivity and ability to tolerate frustration. The study, published in Personality and Individual Differences, found that subjects who took a 60-minute nap were able to tolerate frustration for longer and felt less impulsive than subjects who didn't take a nap. The study authors concluded that "emotional control may become impaired from wakefulness that builds across the day," positing that "napping may be an effective countermeasure."

According to science, then, a short sleep can improve your ability to process information, boost your memory, and even regulate your mood. Nap devotees, rejoice: Your commitment to sleeping while the sun's up has been well and truly validated.

More like this
Wimbledon Alters All-White Kit Rule Amid Candid Period Discussions
By Catharina Cheung and Rachel Mantock
Footballer Jake Daniels Shared His Thoughts On A World Cup Boycott
By Sam Ramsden
Iran Has Issued A Death Sentence Over Mahsa Amini Protests
By Catharina Cheung, Darshita Goyal and Maxine Harrison
Pepsi’s Festive Flavour Is Finally Coming To The UK
By Sophie McEvoy
Get The Very Best Of Bustle/UK