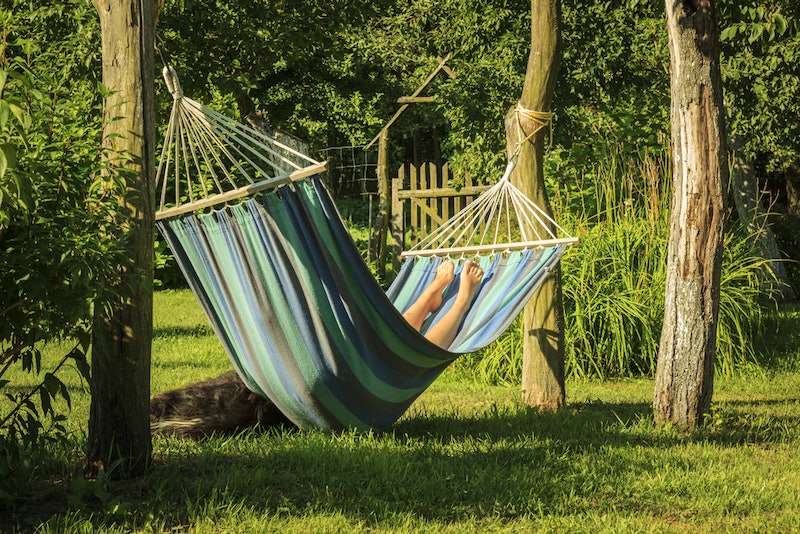 If you’ve ever found yourself nodding off as you gently swayed in a hammock, it’s not just the warm rays of sunshine that were lulling you to sleep. A new study published in Current Biology found that sleeping with a rocking motion actually benefits your sleep and your memory. The researchers said in the news release that not only did participants fall asleep faster while rocking, they also slept more deeply, woke up less, and had improved memory function the next day. Results like that make adding a hammock to your bedroom kind of tempting, right?

During the first study, the researchers used electroencephalography (EEG) to study the brain responses of 18 young, healthy adults over three nights in a lab, according to Scientific American. The first night acclimated the participants to their new environment, the second night they spent in a slowly rocking bed, and they spent the third night — which was a week later — in a stationary bed, Scientific American reports. The researchers found that getting rocked to sleep helped the participants fall asleep faster and stay asleep longer, according to the news release.

"Having a good night's sleep means falling asleep rapidly and then staying asleep during the whole night," Laurence Bayer of the University of Geneva, Switzerland, said in the news release. "Our volunteers — even if they were all good sleepers — fell asleep more rapidly when rocked and had longer periods of deeper sleep associated with fewer arousals during the night. We, thus, show that rocking is good for sleep." But getting gently rocked to sleep didn’t just improve their sleep quality. The researchers found that after they got rocked to sleep, the participants memory recall improved threefold, says Scientific American.

Getting rocked to sleep might seem disruptive when you're not an infant anymore, and even some of the study participants were skeptical at first, Aurore Perrault, a study co-author and former junior researcher at the University of Geneva, told CBS News. But the participants “forgot about the motion after several minutes of rocking,” describing the swaying of the lab bed as “pleasant and relaxing,” Perrault told CBS News.

But without access to a special bed, how do you bring this kind of relaxation into your daily life? After all, a hammock probably isn’t the best for your back and neck in the long run. Commercial rocking beds are starting to hit the market, but the price points start at around $3,450. There were some devices that hit the market around 2010 that were designed to use soporific waves to simulate a rocking sensation in the brain, and early studies indicated they were affective in improving sleep. But they have since left the market and are no longer available.

In lieu of technology to rock yourself to sleep, sleep specialist Dr. Michael Breus recommends taking a warm bath before bed, listening to relaxing music (emphasis on relaxing) after getting into bed, and keeping your bedroom cool, quiet, and low-lit. Dr. Breus says you won’t feel like you’re swaying, but you can try closing your eyes and visualizing a rocking sensation while your music is playing. If you want to try to add a physical rocking sensation, Yoga Journal recommends lying on your back, extending your legs out straight, and gently swaying your feet like windshield wipers for about 30 seconds before letting go.

The researchers said they hope their findings contribute to more treatment options for people who experience trouble sleeping. And they did tell CBS News that, honestly, a hammock “might also do the trick for those wanting to rock the night away,” so don’t rule it out just yet.

More like this
Got Brain Fog? Here Are The Best Supplements For Memory & Cognition
By Carolyn Steber
The 5 Best SLS-Free Toothpastes, According To Dentists
By Amy Biggart and Danielle Calma
How To Decide Between HIIT & LISS Workouts
By Carolyn Steber
I Tried The Air Up Water Bottle, Which Flavors Your Drink With Scents
By Carolyn Steber
Get Even More From Bustle — Sign Up For The Newsletter