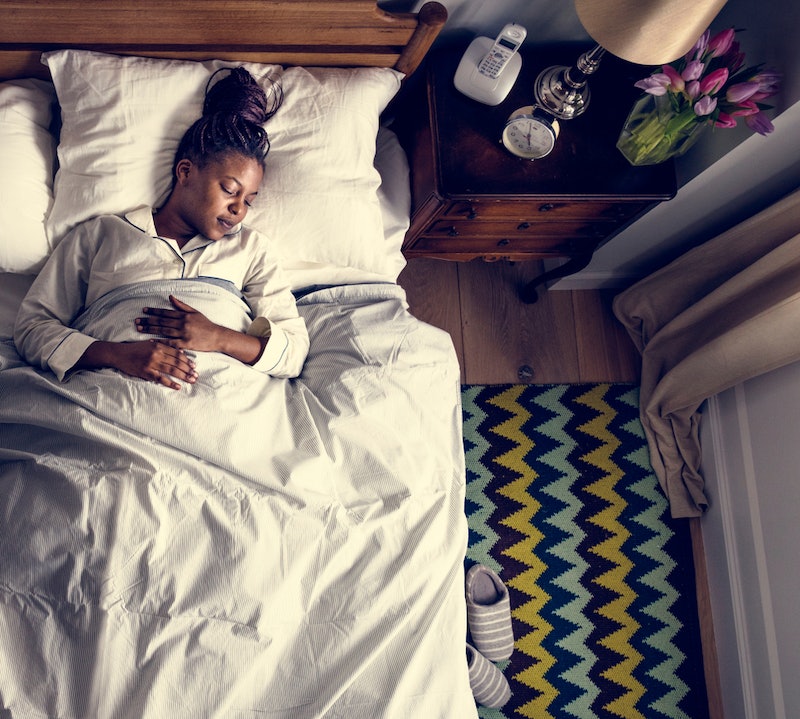 Sleeping is often recommended when you're fighting off an infection or an illness; most of us have spent the day curled up on a couch at some point, under strict bed rest while our immune systems fight off the flu or some other nasty invader. The tie between sleep and the immune system has been known for quite some time, but new studies have revealed fresh information about the mechanism that makes sleep such a vital part of our immune response. Getting a proper night's sleep is pretty essential for maintaining a healthy army of immune cells — but sleep deprivation and untreated sleep disorders can seriously damage them.

One new study comes from researchers from the University of Tübingen, and focuses on a key aspect of our immune system: how it targets viruses and bacteria that might threaten our health. T-cells are "defender cells" in the human body that recognize invading pathogens, like the flu virus, in our systems and go into action to battle against them. There are a few types of T-cells, but one of the most crucial is the kind that hurls itself up against the invading pathogens, attaches to them, and then kills them. The research looked at how that 'attachment' — how the T-cells bind themselves to the introduced nasties — actually works, and found that sleep plays an important role in its success.

T-cells don't bind to new cells automatically. They need to receive signals that activate their binding proteins, called integrins, to glue themselves to pathogens. If you think of T-cells as ships and integrins as grappling hooks, the body actually needs to tell the T-cells to break out the integrins and attach to enemies to destroy them: a captain roaring at them from the bridge, for instance. The scientists behind the study found that several different substances in the body, including adrenaline, prostaglandin E2 and D2, and adenosine, disrupt that signaling, making the T-cells less likely to bind to invasive cells — and making the body more vulnerable to getting ill. If the T-cells are ships, these substances are like massively disruptive sailors that cause havoc on deck.

So where does sleep come in? The study, published in The Journal of Experimental Medicine, measured the integrin levels of volunteers who were either asleep or awake. It turns out that when we sleep, the levels of natural disruptors like adrenaline go down. That, in turn, prompts T cells to bind to threatening cells in greater numbers — and boosts our immune system function. The scientist were able to prove that the boost in integrin was directly related to the natural dip in these particular substances that happens when we sleep. Sleeping well, it seems, helps T-cells attach themselves thoroughly to threats and kill them.

Other science released this week focused on the flip side of this: what happens to your immune system when you don't sleep well. According to a study published in the International Journal of Molecular Science, obstructive sleep apnea — where the airways close temporarily during sleep, stopping your breathing and causing sleep dysfunction — has a clear negative effect on the immune system.

The researchers found that in people with the condition, inflammation — a reaction by the immune system to serious threats — went into overdrive. Excess inflammation levels are linked to a bunch of health issues, including rheumatoid arthritis and heart disease, because the immune system starts attacking healthy cells and tissues. Having disrupted sleep, according to this new research, raises your risk of inflammation-induced health issues over time.

It's been well-known for a while, according to the Mayo Clinic, that a lack of sleep can increase your likeliness of getting sick, because it disrupts the immune system's normal functioning. Now we know that the relationship between the immune system and sleep is complex and multi-layered, and that getting a full night's ZZZs on a regular schedule is key to regulating the body's immune response to threats. If you have a sleep disorder, it's more likely that you'll encounter other illnesses as well.