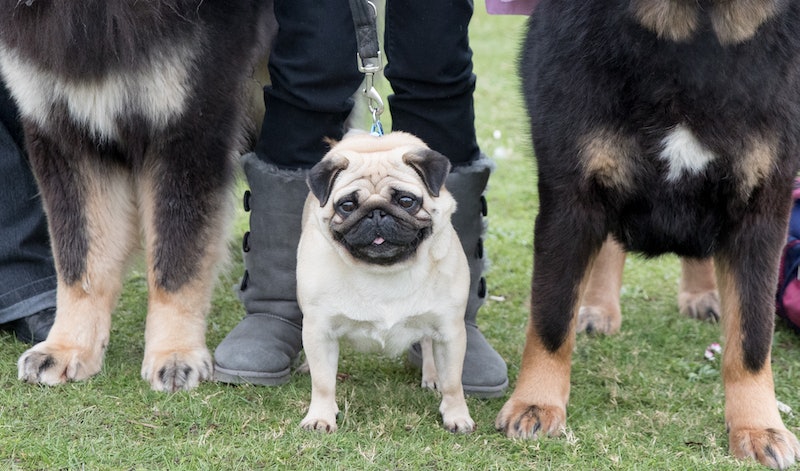 We've all been there. You're walking down the street and you encounter a small dog with the bravado and courage of a dog 10 times its size. Small-dog syndrome is real. In fact, small dogs try to seem bigger by peeing a different way. I kid you not. A new study published in the Journal of Zoology found that small-breed male dogs engage in dishonest scent marking (yes, this is the technical term) to try to fool other dogs into thinking they're bigger than they are. Just how do they do this? Small dogs raise their legs higher when peeing. The height of the urine deposit on a tree or fire hydrant suggests to the sniffer that the urinator is a very large boy.

Aside from being too extra, this finally provides an answer to that age-old question that's been keeping you up at night. Why do little dogs raise their legs so high when they pee that it looks like they might tip over? It turns out that — just like Tom Hanks in the '80s movie Big — small dogs just want to be big, too. "Small adult male dogs may place urine marks higher, relative to their own body size, than larger adult male dogs to exaggerate their competitive ability," the study explained. Not unlike humans, dogs crave the qualities they lack. German shepherds want to be lap dogs, and toy breeds want to leave the impression that they're just as powerful as Great Danes.

While they do exchange information with each other verbally, dogs primarily communicate through smell, and apparently they're not above posturing or puffery. This is why they try to stream their urine as high as they can. It also might be why your dog tends to mark their territory more than usual when you walk them in a new area. It's basically their way of introducing themselves. "Hello! I'm here, and I'm a badass," your chihuahua mix is thinking.

"Communications can occur because dogs have very keen noses and brain parts able to tease out specifics from other dogs simply by sniffing their urine. By sniffing the pee left by another dog, dogs can learn a lot about the dog that did the peeing — such as its gender, age, fertility, and some aspects of its health," Bob Yirka reported for Phys.org. "These communications occur as a means for dogs to learn more about other dogs in the area, both male and female." Well, that's cool.

While it's not clear if dogs can visually gauge if another dog is a different size than them, another study published in the journal PLOS One found that dogs can determine the size of a fellow canine by hearing its growl. In an experiment, dogs listened to other dogs growling while being shown a picture of both a large dog and a small dog. More often than not, the dogs were able to match the growl to the size of dog. Mind blown.

Other research has shown that while dogs have poor vision compared to humans, they can smell and hear markedly better than people, and this is how they communicate with each other. What's more, the reason why a lot of small dogs challenge their larger counterparts has to do with what they were originally bred for. No, they're not actually trying to be bullies. They just want to do their jobs. And, like the nuns who taught me in Catholic school, they don't have patience for any nonsense.

"Many small dogs are terriers, small versions of terriers, or other breeds and mixes of breeds similar to terriers," Dr. Marty Becker explained on Vet Street. "These dogs were developed to keep homes and barns free of rodents, and that’s a job that requires some serious attitude, which may translate into fearlessly (and foolishly) taking on a much larger canine at the dog park."

Even though a dog might pee higher to fool other dogs, that doesn't mean the dog knows it's smaller than another dog just by looking at it. "Dogs don’t know how big they are," dog trainer Anthony Jerone told the New York Post. "Whether they are a 5-pound Chihuahua or a 100-pound Lab, they act out of instinct." And, apparently that instinct tells them to aim higher.