Nobody knows how to prey on our FOMO quite like Snapchat, but even the infamous blink-and-you'll-miss-it social media platform is throwing us a bone. Now, you can send links to Snapchat Stories outside of the app itself, and some of them will be viewable for way longer. In perhaps the unsnapchattiest move in all of Snapchat history, they're making it so everyone can enjoy Stories, whether they have their own account or not.

Now, it won't work on all Stories. Here's how you'll be able to access the new feature. For starters, Stories can be sent outside Snapchat only as long as they're public. You must also have the app's redesign, which is currently live in Canada, Australia, and the UK, and will be available to everyone on Snapchat within the next few weeks.

Sharing this content is easy. To create a link to a Story, hold down the tile on the discover page, and then copy the link. Snapchat then allows you to share it via text, email, or to another social media platform like Facebook and Twitter. On Facebook, people will see it the same way you'd see a link to a YouTube video — and it won't auto-play. On Twitter, the link can play as a video right in the tweet itself. The feature is made possible thanks to a new desktop web viewer on Snapchat.com. 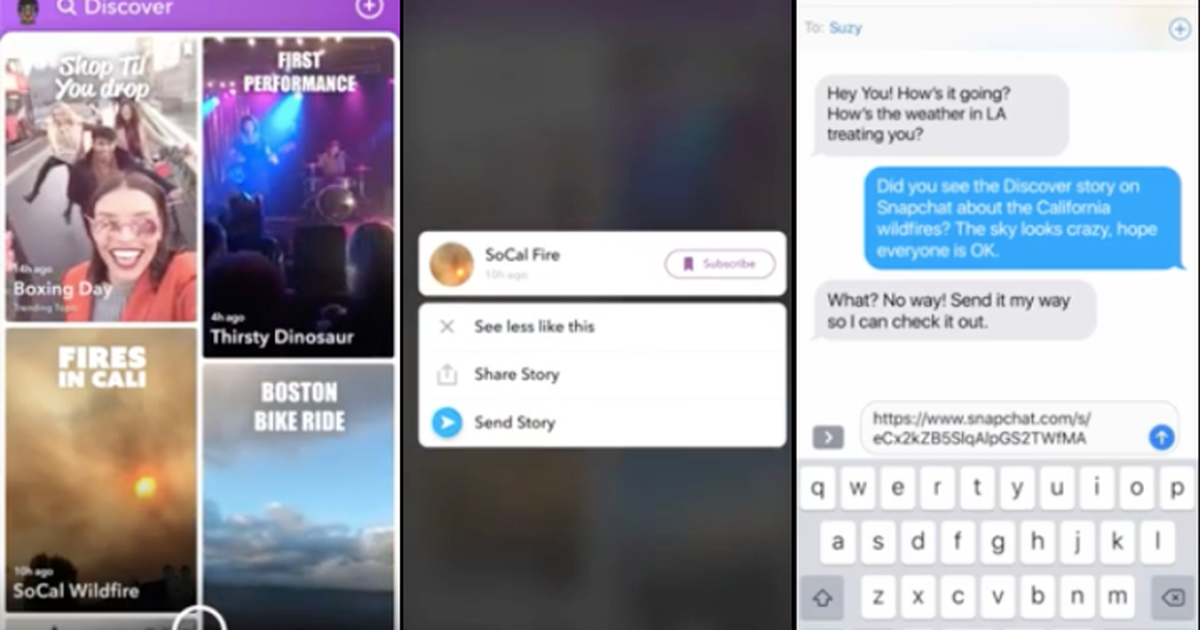 It's a bold move that makes Snapchat far less exclusive and private than it has been thus far. At the moment, this new feature works for Official Stories (read: celebs), Our Stories, and Search Stories, but not Publisher Stories or Shows. Official Stories will be available to watch for 24 hours, while Our Stories and Search Stories will stay up a whopping 30 days, unless you decide to delete them sooner. As an added bonus, when people watch them, there are no ads.

It's a calculated move on Snapchat's end, as they continue to compete with the likes of Instagram and WhatsApp. Although the app has obviously proved its immense popularity, its 178 million daily users are still trailing behind Instagram Stories' and WhatsApp Status's 300 million. While 178 million is still pretty impressive, Snapchat has been struggling to bring new users aboard, as well as keep users on the app for a longer amount of time. Even fancy new features like Snap Maps weren't enough to give the app the leg-up it needed.

The solution to their traffic problems could be simply exposing more people to the app, without requiring them to create an account, first. By allowing people to view certain kinds of Stories online, they'll be able to see what Snapchat is capable of, and hopefully be enticed enough to join themselves.

Snapchat has always been a bit of an enigma. It doesn't have the same massive, widespread fame that Facebook does, and it's not as intuitive to use as Instagram and other platforms. In fact, it went through a revamp last November due to complaints that it was too difficult to use. Plus, these days, all three apps are essentially copying each other, making it a race simply to see who can come up with an idea and perfect before the other app figures it out.

Regardless, Snapchat certainly has come a long way. Stories launched in 2014, offering users a chance to view and replay them for up to 24 hours — unlike messages sent privately to one single user, which disappear once you've opened them. It's this sense of elusiveness that's always made Snapchat so addictive, but it looks like it's also possibly worked against the app.

Be on the lookout for Stories, coming to you soon.