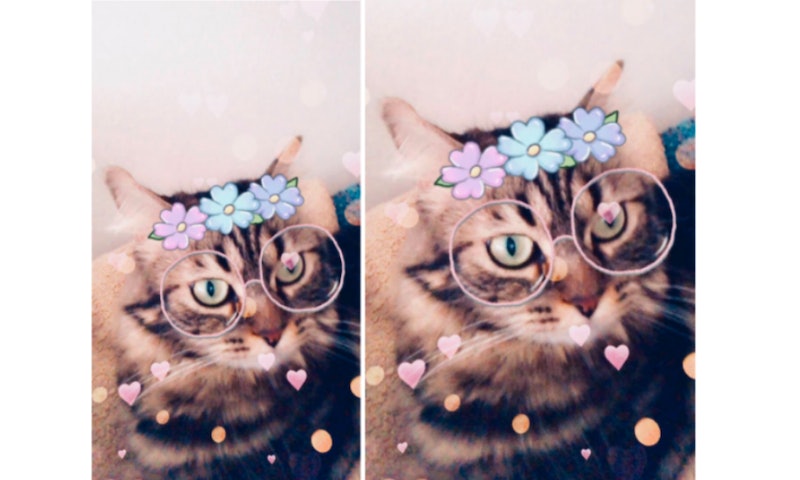 It's no secret that people are hella obsessed with their cats and cats are totes obsessed with social media. So it was only a matter of time before felines starting getting frisky alongside their humans with Snapchat's selfie filters for cats. The social media app where you waste hours applying funny filters to your face announced the new cat filters on Twitter, and people are wasting no time snapping their cats, effectively giving a whole new meaning to the term cat glasses.

Previously, Snapchat filters only detected human faces, and with today's introduction of cat-face filters, the dog people are feeling a little shunned (though some people have reported getting the human filters to work on dogs). However, considering that the cat holiday Halloween is almost upon us, cat filters are an appropriate first foray into filters that recognize animal faces. It's time to give the cat people what they want, which is clearly more things to do with their cats that their cats find annoying AF.

I'm not kidding even a little. A survey by OnePoll for Mars Petcare revealed that cat people like an average of almost 400 cat-related posts and 725 cat photos and videos on social media every year. I think it's safe to say that the introduction of Snapchat cat filters is going to make that number even higher. Because cats, with glasses!

What's more, people owned by cats spend around eight days a year talking to their feline friends and 20 days engaged in cuddling sessions. Now those convos and cuddles can be snapped on the daily, which just might make you and your cat Snapchat famous if your cat tolerates all of the selfies.

While snapping your cat might be super fun for you, the felines in these tweets don't look that thrilled about making their Snapchat debut. Seriously, I spent 10 minutes trying to get my cat to cooperate. According to the cat survey, this is pretty common as people reported that "it takes an average of three attempts to get the purr-fect photograph."

But cat parents keep trying until they get it right according to the survey, which noted that 44 percent of people have a framed photo of their cat. Come on, admit it. You're one of them. Hey, don't let there be any shame in your cat-photo game. Instead, raise the bar by framing a new photo of Fluffy sporting her sick Snapchat specs.

Even if your cat is not impressed, the photo will def give you all the warm-and-fuzzy feels when you glance at it during your humdrum work day. Snapchat wants you to do it! But because Snapchat likely doesn't know who has a cat and who doesn't, it's telling everyone to go get themselves a cat to take a selfie with.

Some cats are more patient than others. If you have cats, then you know that they seem to possess a telepathic talent for knowing just when you're going to take a picture of them, and they act accordingly. Case in point, @innocentbirb_ tweeted: "I very much appreciate the cat filters, but WHOSE CAT??? would sit still for 5 seconds for a picture, and WHOSE CAT??? would take a selfie with their human without shredding up their arms? I barely got this distant picture of Stella!"

It's up to you to decide whether or not it's worth a few scratches and bites to finally launch Fluffy onto the public stage. Just make sure to wash your injuries thoroughly so you don't wind up at the ER with a staph infection.

Seriously, cats like being photographed just about as much as they enjoy walking on leashes or wearing costumes — which is to say not at all. Cats want to do their own thing, and they don't like looking dumb, especially on social media. In fact, don't be surprised if you cat thanks you for snapping her by coughing up a hairball on your pillow.

But hey, these Snapchat cat-filter photos are pretty adorbs. Someone should totally go snap shelter cats so they can use these smart-looking snaps as their adoption pics. If you want to get cat snappin' ASAP, update your Snapchat app and selfie your cat until the sun goes down. The filters are ready and waiting, even if Fluffy isn't.