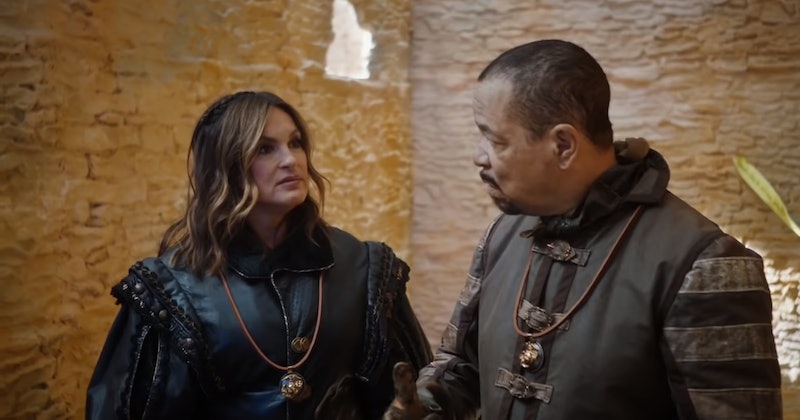 There might be a couple of new rulers on the Iron Throne — and they work in the Special Victims Unit. On Saturday, April 6, SNL created a Game of Thrones and SVU crossover show, and fans wish it was a real series. The re-imagining of Game of Thrones was part of a sketch spoofing the much-hyped final season of the popular HBO series, teasing several new "prequels, sequels, and spinoffs." A highlight from the bit was a spinoff procedural called GoT: SVU, which featured a special cameo. Mariska Hargitay's Olivia Benson and Ice-T's Fin Tutuola appeared to investigate a crime at Flea Bottom on the East Side of Rhaenys' Hill with both SVU stars dressed in full medieval attire. The fake series was even created to "Dire Wolf," a play on SVU executive producer Dick Wolf.

The SVU crossover wasn't the only new series the SNL sketch proposed. There were several other potential spinoffs including a romantic Riverdale-style drama starring Jon Snow and his secret White Walker girlfriend called Castle Black. There was also an animated spoof of Daria called Arya, which followed "everyone's favorite angsty assassin in cartoon form." The sketch even pitched a sitcom starring Sam and Gilly called The Queen of King's Landing, as well as a handful of other crossovers including Cersei and the City, No Ballers, The Marvelous Mrs. Melisandre, and Wildling Out. There were even kids shows, including Dire Guys and Hodor's House.

However, the Game of Thrones and Special Victims Unit mashup was clearly a highlight, and fans on Twitter are obsessed. The Wrap writer Trey Williams tweeted a screenshot from the sketch, writing, "One question: Why DON'T we have Game of Thrones: SVU? Who wouldn’t watch that?!" News writer Tania Hussain agreed that a GoT franchise crosser with SVU was a great idea, tweeting, "I would 100 percent watch this #SVU-inspired #GameOfThrones spinoff starring @Mariska and @FINALLEVEL. I am that body, thank you. #SNL."

Hargitay and Ice-T's cameos were particularly popular, and fans also expressed love for the stars on social media. Twitter user @omfgxaly noted the sketch brought together so many great things, writing, "mariska hargitay and ice t played out the john mulaney svu sketch with a game of thrones theme and it certainly checked a lot of boxes for me." Another fan, @ElleDubYuh, thought the cameo was hilarious, tweeting, "Yo when Olivia and Fin walked on for Game of Thrones SVU I fell out #SNL."

Even more fans shared love for the SVU stars. One user, @lunamicaa2, tweeted a screenshot of the funny moment, writing, "Can't stop seeing them! I laughing with this. I loved it #GameofThrones #SVU #SNL." Yet another fan, @VABVOX, wrote that the crossover was the show they never knew they needed, tweeting, "OMG. I didn't even know how much I would want to see Olivia Benson in Game of Thrones: SVU created by Dire Wolf."

SNL may have been making a joke about the Game of Thrones hype, but fans are clearly on board for this spinoff. If HBO wants to keep the Thrones franchise going, it might not be such a bad idea to bring Benson and Fin to Westeros.