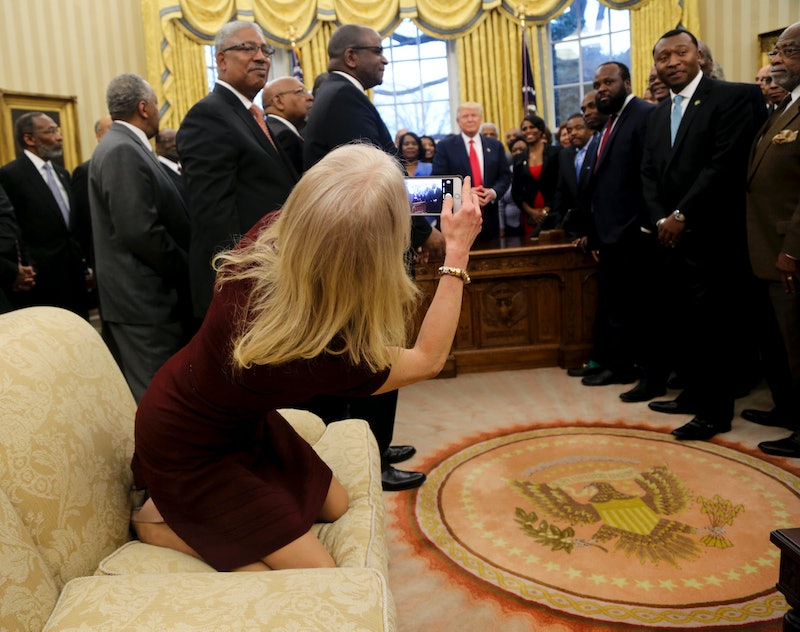 Saturday Night Live broke ever so slightly from its typical format this week to make a creative and particularly hilarious joke out of the Kellyanne Conway sitting controversy. Rather than dedicating an entire sketch to Conway's unusual sitting position on an Oval Office couch earlier this week, Kate McKinnon, in her now-iconic Conway getup, made a few random appearances throughout the episode. Twitter absolutely loved the running joke and the surprise "Couch Legs" Easter Egg appearances, which made great use of time in the packed episode.

McKinnon made three appearances throughout the episode — one on a chair at the end of a sketch early in the episode, one on top of the Weekend Update desk, and one onstage after one of Father John Misty's musical performances. McKinnon completed the look with a look-alike dress to the ones that Conway was wearing in the picture that shook the world this week.

Social media users loved the surprises throughout the episode, which seemed to generate a lot of interest online due to the non-traditional format the show used to incorporate the joke. Twitter user @vicsepulveda even made a side-by-side comparison of McKinnon with the real Conway from "Couchgate," the name that commenters adopted for the "scandal."

In retrospect, it's probably a good thing that SNL chose not to turn this latest Conway debacle into a full-blown sketch, because the incident and public response to it was tinged with sexism that wouldn't have served the show's immediate purpose or overall message. To be 100 percent fair, it's difficult to imagine one of Conway's male colleagues sitting like that, but it's also difficult to imagine they would have gotten the same amount of flack for doing so either. A Democratic lawmaker even made a suggestive joke about Conway being "familiar [with] that position" (though he insists he didn't mean it in a sexual context). Making reference to the hilarious absurdity of the situation without risking any inappropriate humor was definitely the move for SNL and it seems to have worked out perfectly.

Conway has been a great source of humor for SNL this season, but it's always been for something actually related to her career. Mocking her just for sitting would have been a little too much, so the happy medium the writers found in this episode by referencing the joke without taking it any further was a great solution. The next time Conway says something laughable, the show will undoubtedly go right back to poking fun of her in sketch format.