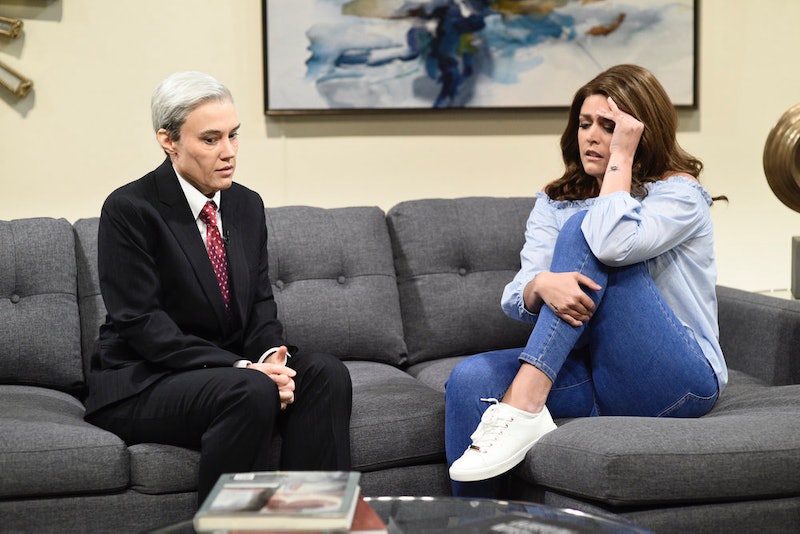 The Bachelor finale featured Arie and Becca's emotional (and unedited) breakup and it had viewers talking so much it even inspired the cold open on the March 10 episode of Saturday Night Live. SNL's The Bachelor parody of Arie and Becca's breakup takes on the now-infamous moment with a political twist. Becca (played by SNL cast member Cecily Strong) arrives at a house, but she doesn't get bad news from Arie. Special Counsel Robert Mueller (played by cast member Kate McKinnon) shows up instead and he devastates Becca with updates about the investigation into alleged Russian interference in the 2016 election and President Donald Trump's win.

The sketch opens the episode with Beck Bennett as Bachelor host Chris Harrison, who promises dramatic, unedited footage. Becca arrives at a house and waxes poetic about the future as she checks out the view. She sits on couch and Mueller walks in dressed in a suit. She's happy to see him, but he seems nervous. At this point, we see a split screen of the footage (like in Arie and Becca's breakup). Mueller tells Becca: "I've been struggling a little bit, trying to figure this whole thing out, but the reality is, I don't think I can give you everything that you want right now."

Wait, what? And that's the exact thoughts of Becca. "So what, you don't have Trump on collusion?" she asks him, unexpectedly. They aren't breaking up, you see, but he's telling her that he'll be pursuing another course of action when it comes to the investigation.

Mueller then tells Becca: "I think I need to explore that I have a stronger case with some other stuff ... I'm just trying to be honest with you that I can't commit to collision right now."

Becca says, "Collusion is the only thing I've been looking for for the past year." Strong's Becca also uses real-life Becca's catchphrase, telling Mueller at one point, "I was ready, Bob. I was ready to do the damn thing."

She is visibly upset about the news and even gets up to cry in the bathroom. Mueller totally channels Arie here: He lurks outside, knocks on the door, and sits back on the couch after being asked to leave several times.

When Becca returns, she sits down and says, "So that's it? He's just going to be president?"

Mueller isn't sure what to say (or how long the Trump presidency will last) and he's not sure how Stormy Daniels will affect Trump either. Mueller's best advice for Becca? He tells her to invest in American steel and lets her know that she's the next Bachelorette, which cheers her up.

It's a parody that combines two unexpected things: political news and The Bachelor. But many fans were pleased by the surprise twist in the sketch.

Many viewers thought the parody was spot-on.

Some viewers thought the sketch was better than the actual Bachelor finale.

And for one fan, the best reaction to the sketch is using Becca's trademark catchphrase.

Arie shocked Bachelor Nation last week during The Bachelor finale, when he broke his engagement to Becca in order to pursue a relationship with Lauren. During After The Final Rose, Arie proposed to Lauren, so he is engaged once again. While The Bachelor may not have much in common with politics, the sketch still had many emotions in common for viewers who followed The Bachelor, the news, or both.

Check out the sketch in the video below.

But the sketch leaves viewers with two questions: Will obstruction charges work for Mueller? And will Becca find her true love and get engaged on The Bachelorette? Only time will tell.

More like this
Kanye Walked Out Of Kim's 'SNL' Monologue Because Of These 2 Words
By Jake Viswanath
Watch Benedict Cumberbatch Lead An ‘SNL’ Medieval History Lesson On Roe v. Wade
By Grace Wehniainen
Selena Gomez’s ‘SNL’ Hosting Debut Had Twitter Gushing Over ‘Barney’ & Wigs
By Stephanie Topacio Long
‘SNL’ Referenced Jesse Williams’ Broadway Leak In A Chaotic Theater Sketch
By Grace Wehniainen
Get Even More From Bustle — Sign Up For The Newsletter