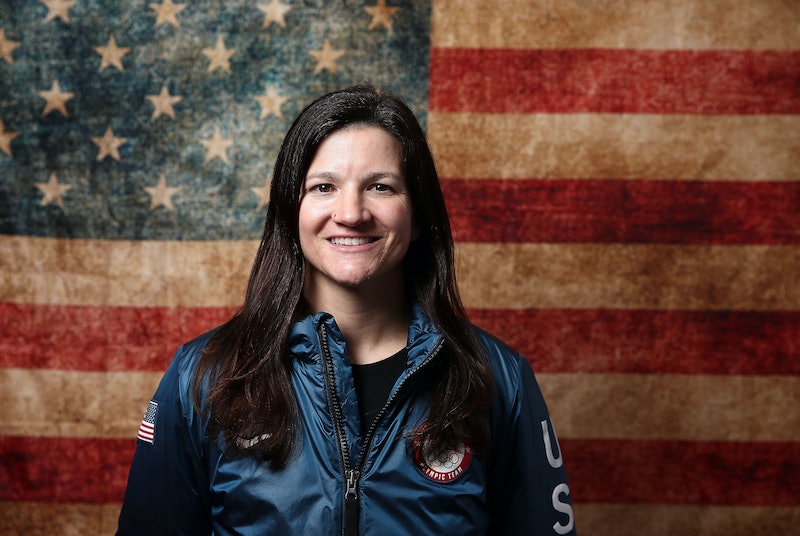 You may remember the quote from Tom Hanks in A League Of Their Own: "It's supposed to be hard. If it wasn't hard, everyone would do it. The hard [...] is what makes it great." Five-time Olympian, three-time Olympic medalist, and Team USA snowboarder Kelly Clark's coach uses a similar mantra to inspire her. "It always gives me perspective to work harder and not be discouraged when things get hard, and realize that what I’m doing is a huge success and not to be so hard on myself," Clark tells Bustle. "Whether you’re an Olympic snowboarder or not, it’s easy to get discouraged, but remember that what you are doing is actually really special."

As she wraps her fifth Olympic experience, Clark, 34, looks back on the impact she's made in the sport of snowboarding, which first became an Olympic event in 1998. Clark's legacy as a change-maker was further cemented when teammate Chloe Kim awarded her Order of Ikkos medal to Clark, her self-proclaimed Olympic hero. ESPN reported that this is only the second time that an athlete has opted to award their medal, which is named after Ikkos of Tarentum, the first recorded Olympic coach in Ancient Greece, to another athlete.

"She has been there for me every step of the way," Kim said of Clark during a gathering at USA House, according to USA Today. "Ever since then, she really took me under her wing, has guided me through every possible situation good and bad and I’m so happy to call her my friend." Kim's acknowledgement of her mentor highlights Clark's commitment to expanding her definition of success to include celebrating those around her.

"I got to a point in my career a few years back where I realized that if my dream only included me, it was just too small of a dream," she says. "I kind of transitioned into more of a mentor role as a lot of my friends started to retire, and I just kind of embraced it," Clark tells Bustle. "I’ve taken great enjoyment in being able to mentor and encourage and inspire the next generation of snowboarders. Watching both Arielle [Gold] (who was also awarded the Order of Ikkos medal) and Chloe perform so well at these Olympics — I was just really proud of them."

By making her dream bigger, and focusing on creating a culture of support, encouragement and inspiration, Clark was able to witness firsthand how her actions helped propel Kim, 17, to an Olympic gold medal in PyeongChang. "I was extremely honored and taken aback when Chloe thanked me with Order of Ikkos," Clark says. "I think one of the most powerful things that we can do is to create and inspire and build culture. I think on some level medals and achievements [...] fade out, but a person’s life who is impacted and inspired and made better because you were a part of it, that’s something that is perhaps greater than any medal could ever be."

It Takes An Olympic Village

Clark cites her own mentors as being instrumental to her success. "I watched Shannon Dunn and Ross Powers both take home Olympic bronze medals [in 1998], and then I got to compete in the 2002 Olympics with both of those athletes. Both Ross and Shannon just inspired me to no end," Clark tells Bustle. Like Clark, Powers grew up in Vermont, which made her idea that snowboarding could be a career seem like not just a dream, but a realistic possibility. "Seeing him do so well on the world stage just made me think my dreams were achievable — you know [if ] this kid could do it then so could I." She adds that she is still close with both Dunn and Powers. "They’re also good friends after all these years, and that’s kind of the culture that is snowboarding."

Clark's career longevity (she's now been snowboarding for 27 years and competing since high school) has taught her that nothing happens in a vacuum. "I always say that behind every great athlete is a team of great people," she says. "From my coaches, my family, my trainers to partnerships with Kellogg, there’s just so many people [who] really invest and believe in my career, and that’s what makes great athletes."

The Pursuit Of Progress

Aside from being one of the most successful athletes in the history of snowboarding and climbing Mount Kilimanjaro to raise money for the nonprofit Right To Play, Clark is also the author of the book Inspired: Pursuit of Progress, which she penned after the 2014 Olympic Winter Games in Sochi. The book explores how Clark pivoted from focusing solely on success to widening her scope to include mentoring, self exploration, and pursuing progress instead of perfection.

Through that process she says, "I realized what was motivating me was that I had something to contribute to the sport. [Because of] who I was as an athlete, and who I was as a person, I could set other people up to succeed. I could use my experience to continue to push the sport further and invest in people. I just wanted to make sure that the sport of snowboarding was better because I was a part of it." There is no doubt that Clark has left an indelible mark on the sport of snowboarding, which is evidenced by the recognition she received from Kim and Gold.

"Seeing the response from both Arielle and Chloe thanking me — that’s why I’m here," she says. "It’s about inspiring others." Clark also set out to change how Olympic athletes approach competition after she realized that she hadn't really set herself up for success during the 2006 Winter Olympics. "I was doing tricks only because it was finals, it wasn’t like I was doing those tricks all the time. It was almost like I was kind of [being] reactionary to what was going on around me." Since then, Clark has made a point to make sure she and her teammates are performing tricks because they want to, not because they think they have to.

With renewed focus and purpose, Clark became the first woman to land a 1080-degree jump in 2010. "I really try to raise my own bar and set the standard for snowboarding where we’re not just getting into these X Games finals and Olympic finals, and kind of just throwing the ball into the end zone and hoping for the best, but we’re training and preparing and getting ourselves to a level where we have a normal of really high level," Clark explained. "That was something I feel like was very influential in the sport and really set the tone for women’s snowboarding"

With experience comes wisdom, and Clark is throughly committed to sharing her peaks and valleys with not only the next generation of snowboarders, but with anyone who's working toward a goal. "Anyone who’s in leadership, whether they’re in athletics or the business world, I think wants to build a culture that essentially they can step back from, and there won’t be a giant hole," she says. "I think I’m finally getting to that point where I can look at women’s snowboarding, I can step back, and I can proudly say that there’s not going to be a giant hole."

By pulling up other athletes, Clark has ensured the future success of women's snowboarding because she realizes that true success is larger than any single person: It really does take a village. "The biggest thing for me coming out of this Olympics is embracing, and being able to celebrate, other people’s success," she says. "If your dream only includes you, it’s just too small of a dream."