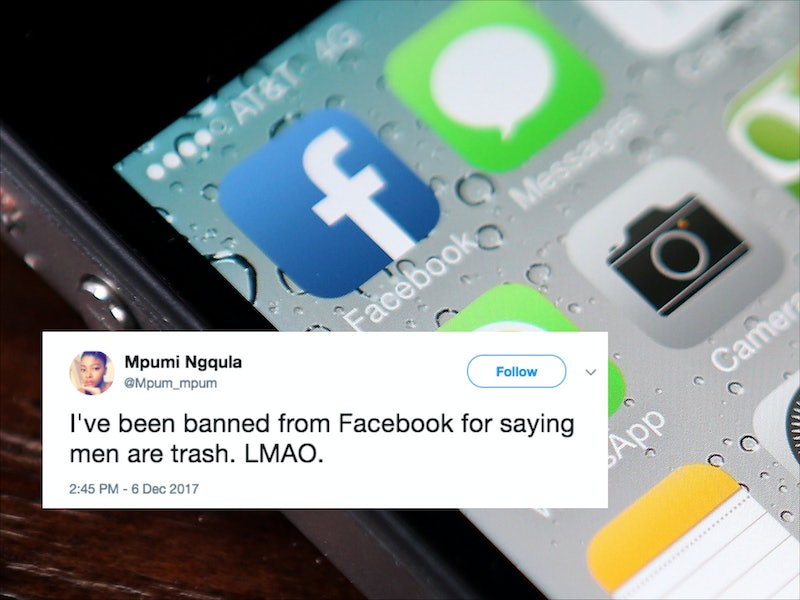 As we bid farewell to the garbage fire that was 2017, a part of you is probably hoping all men go up in flames with it. I'm only half-kidding: Being a woman this year has felt, as many women before me have noted, exhausting. We've seen our right to birth control crushed, and our male heroes exposed as predators. Minority individuals have been ostracized, and our female icons mocked. Meanwhile, Facebook has suspended the accounts of multiple women for writing variations of your 2018 mantra: "Men are trash."

In a bombshell The Daily Beast report published Monday, reporter Taylor Lorenz chronicled the account suspensions of several women who posted, "Men continue to be the worst," "Men ain't shit," "All men are ugly, "Men are scum," and so on. The suspensions are particularly disturbing when you consider everything that came to light at the hands of the group TIME dubbed "The Silence Breakers." If women can't consider social media a safe space to break their silence, where can they?

Facebook, for its part, has been open about the shortcomings of its moderated (and non-moderated) content. Mark Zuckerberg has described the offensive content posted on the site as "heartbreaking," and earlier this year pledged to add 3,000 more moderators. Yet, in its efforts to curb hate speech on the platform, Facebook has outlined which demographics it regards as "protected" groups, and one of those groups are men (along with all other genders, races, and religions, per Lorenz' The Daily Beast report).

Complicating things further, content moderators usually examine content in a vacuum, e.g. without information about the poster or the context. If it can be considered a threat against a protected group — anything from "Throw all men into the ocean" to "I'm ready for the all-female reboot of America" — then Facebook reserves the right to suspend the account, no matter the context. Several female comedians who spoke to The Daily Beast noted that they had been suspended more than once, and for a longer period each time.

It's understandable that Facebook has struggled with the nuances of moderating all content from its two billion users. What the #MeToo movement has exposed, however, is the critical need for a safe space for women to share their experiences, support one another, and "break the silence" in their own words, on their own terms.

That safe space, at least in 2017, is the internet. Specifically, it's social networks like Facebook and Twitter. It's hard to imagine another time in history when this kind of collapse of predators' careers would have been possible: If #MeToo hadn't stormed Facebook and Twitter, media and Hollywood juggernauts may never have been exposed as sexual abusers. Without #MeToo, many victims would have believed they were alone, and even that it was their fault.

In a perfect world, of course no protected group would take precedent over another, because every group would be treated equally. But if #MeToo has taught us anything, it's that sexual predators can be found in every sphere of daily life, and that, to hold them accountable, we must allow their victims a safe space. Most women in America have been sexually harassed, at the very least, and without a place for victims to expose what happened to them, this kind of systematic violence would go unacknowledged and unpunished.

As we strive to protect survivors, we need to also protect their ability to come forward safely and without their voice being, quite literally, shut down. Those who have been maligned, assaulted, and mistreated are already facing an uphill battle in the justice system. We can't take away their right to be heard on social media.