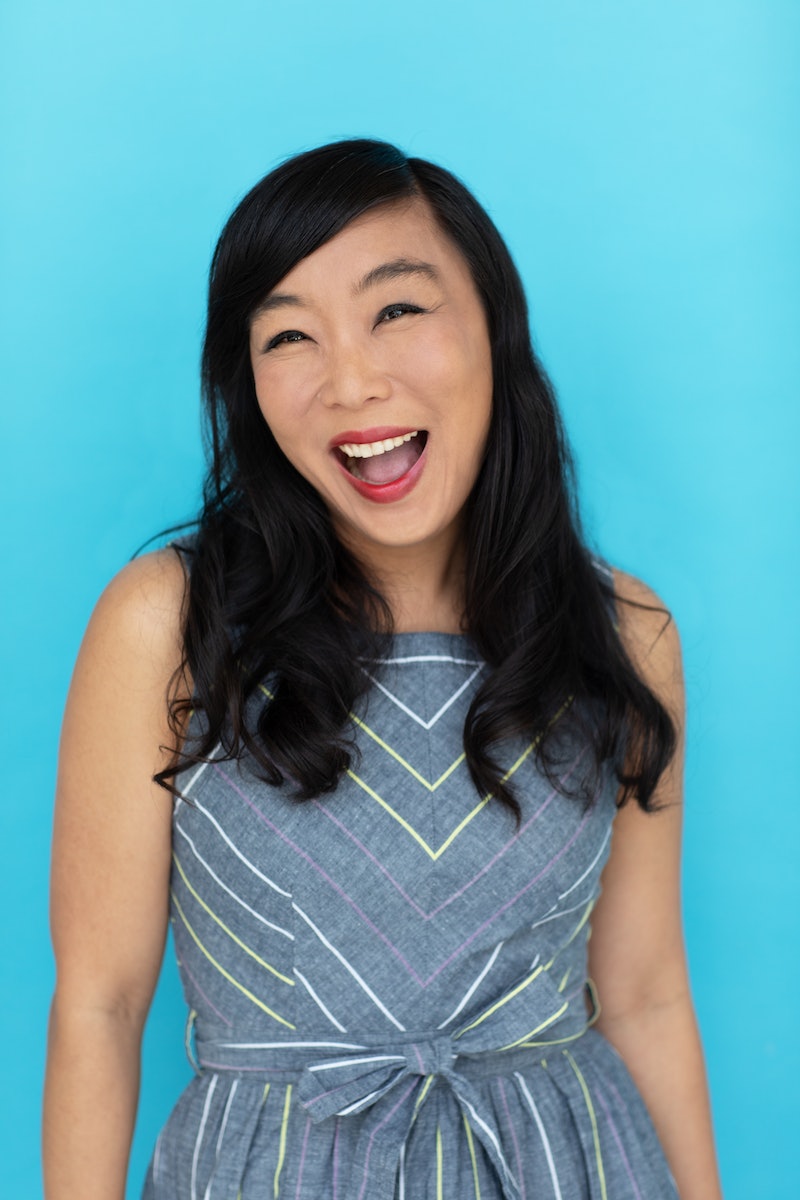 About 15 years ago, I was working for a production company that made frothy TV shows for entertainment networks. The shows usually focused on celebrity gossip, movie history, music news, and more celebrity gossip. My job was to come up with ideas for stories, research those ideas, and fact-check the scripts. My official title was "reporter."

When my contract was coming to an end, I began looking for other similar jobs. One that jumped out at me was at a major entertainment network. According to the job description, they were looking for a person to do all the things I already did. And bonus, the job title was also "reporter."

I applied, and within a week, they called me in for an interview. But when I arrived at the headquarters, wearing one of my favorite mod-style mini dresses, my favorite pair of ballet flats, and a brand new patent leather bag on my shoulder, the front desk person asked me twice to repeat why I was there and who I was there to see.

Eventually, a staff member took me to a tiny room to be interviewed.

"He’ll be with you shortly," the staffer said solemnly. I sat alone and waited.

But when the interviewer finally appeared, he didn’t even bother to sit down. He stood in the doorway and said, "I’m not sure if you understand, but this is an ON AIR position." He looked me up and down and repeated "on air." He then told me that he didn’t want to waste any more of my time or his, and walked out.

I sat in shock, looked down at my ballet flats, and listened to the sound of his footsteps fade down the hallway.

I also remember walking to the subway, and deliberately avoiding my own reflection in the office building windows.

I don’t remember how I got back to the reception area after that. I’m guessing someone fetched me, maybe even the same solemn staffer who seated me in the first place. But I do remember noticing all the white, leggy, long-haired, willowy women in bandage dresses and heels I passed on my way out – women who I presumed were applying for the same job I was, and who were more "qualified."

I also remember walking to the subway, and deliberately avoiding my own reflection in the office building windows. And I remember, on the way home, stopping by the shop where I’d purchased my patent leather bag the day before and returning it. Finally, I remember coming home to my roommate Jen, who was outraged at what had happened to me, and who said many salty words about my interviewer — none of which can be printed here.

But here’s the thing: My interviewer (who has since gone on to be a pretty big deal at that network) was right. I didn’t understand that the job was for an on-air reporter. The job description didn’t make that clear. And if I’d known the job was to be on camera and just read cue cards, I probably wouldn’t have applied.

That’s because - truth be told – I don’t have a face or body that TV studios have traditionally put on air. I’m brown, I’m short, I’m muscly. Some people even call me stocky. I have a big face and a lot of freckles and petite little teeth. None of these are bad qualities. But they’re not what networks seek out. Historically speaking, a female "face for television" is everything I’m not.

And yes, I’m one of the people who — without planning on it — found myself rising up the entertainment ranks thanks to these forms of new media.

All that being said, I want to make something clear: I’m not actually hideous looking. On a good day, I’m as cute as a button. And on my worst days, I’m probably the equivalent of wallpaper. Tourists don’t point and stare; children don’t run away from me crying. In short, I look like most people.

Of course, nothing lasts forever — including entertainment industry standards of what constitutes a "face for TV," and in recent years, people like me have begun appearing on TV more and more. I attribute this shift to the rise of social media, YouTube, and podcasting — all of which have allowed people who are "unconventionally attractive" to promote themselves outside the mainstream entertainment structures and thrive. And yes, I’m one of the people who — without planning on it — found myself rising up the entertainment ranks thanks to these forms of new media.

'So You Want To Start A Podcast' by Kristen Meinzer

A few days after my comically short interview at the entertainment network, I landed a job behind the scenes at another TV production house. When that job ended, I moved on to public radio. Within a few months, the radio station asked me to share my opinions about films in a weekly segment and cohost a podcast called “Movie Date.” And here’s where the magic comes in: “Movie Date” led to interview requests from local TV networks, who enjoyed what I sounded like.

Before my first TV appearance as a film critic, I wondered: Is the network going to be disappointed when they see what I look like? But when I showed up, the first thing the make-up artist said was, "You are too adorable!" She put some powder on my nose. I want on air. I shared my opinions. And after my segment, the producers said I was as animated and fun to watch on air as I was animated and fun to listen to in my podcast. They asked if I could come back soon. And I did multiple times.

After lots of TV appearances, radio appearances, and six years of cohosting "Movie Date," I began hosting "By The Book," a reality show in podcast form, in which my cohost and I live by the rules of self-help books. That show has led to dozens of appearances on other podcasts, radio shows, and yes, more TV programs.

My answer: Anything is possible.

And then there’s the podcast that’s led to more TV appearances than any other show I’ve hosted: "When Meghan Met Harry." A six-month lovefest that began with the engagement of Meghan Markle and Prince Harry, and ended on location at their wedding, WMMH led to a regular stint on CBC TV’s Morning Live, multiple appearances on a range of BBC TV programs, one-off appearances on dozens other networks, four prime-time Lifetime TV specials in which I appeared as a royal commentator, and continued TV requests to this day.

At this point, I’ve lost track of how many times I’ve been on TV, and some people have even asked if I’d make the jump from podcasting to full-time TV hosting. My answer: Anything is possible. I love podcasting. I love TV. And thanks to podcasting, I’ve come to realize that, contrary to what the haters say, I’ve had a face for TV all along. We all do.