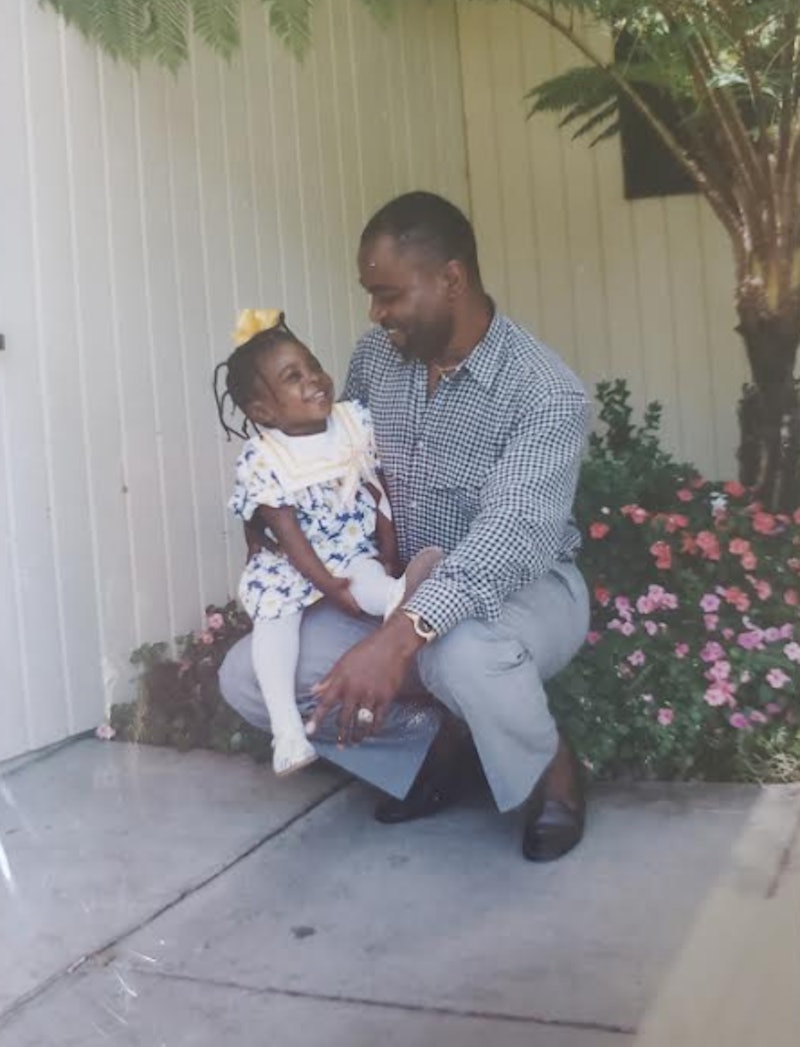 I heard my bedroom door creak open. It was 8 a.m. on a Saturday and my dad was coming to wake me so we could go to the soccer field, but I was already up. I was six years old, and although nothing excited me more than sleeping in and watching cartoons, it was the one time every week where I didn't mind my sleep being disturbed. We’d put on our tennis shoes. He’d pack his cleats and make sure he had all of his gear in the car. I’d ask if we could get pizza after. He always said yes.

This was our ritual, our thing, one as sacred as church on Sunday. At the field, I watched intently from the sidelines as my dad and his fellow African teammates relived the days of their youth as soccer-obsessed kids in the streets of Enugu, Accra, and Yaounde. They all eventually ended up in the Bay Area in their 20s and 30s, and wasted no time forming their own soccer league endearingly called “Afriscope,” competing against teams from all over the world for 10 years.

While he wasn't the best at showing his emotions, soccer seemed like his love language. I was at a stage in my life where I would follow my dad anywhere. The only thing that mattered was that he was there, and so to the soccer field I went. The way he lit up while kicking around the ball, his calm and confident demeanor while driving down the field — it was our special way of bonding and it felt like I got an exclusive pass to get a peek into his world.

During the weekdays, I would sometimes hear him at the crack of dawn when the European league teams would play. He tried to keep his one-sided banter to a minimum since my little brothers and I had school in the morning, but he couldn’t help it especially when Arsenal, one of England’s national teams, or his favorite player Nwankwo Kanu was playing. His exuberant commentary after every play rattled yet excited me. Whenever the Super Eagles, our national Nigerian team, played, our eyes were glued to the screen. When they lost, my dad's exuberance quickly turned into disdain. Like clockwork, calls from my uncles — and our extended family of “uncles” — would pour in for my dad to discuss the tragedy.

Soccer is the commonality that binds Nigeria. With over 250 different tribes and cultures, you whisper “Super Eagles” in anyone’s ear, and you’ll find yourself in a spirited debate about what the team needs to do to improve (because somehow every Nigerian is also a trained World Cup soccer coach) and when their true glory days were (1992. No debate). Long before the British colonized the country, Nigerians were already playing different forms of what became known as “football” but it had never been standardized — until 1902. The governor at the time, Sir Frederick Lugard, believed sports were a great way for kids to learn courage and respect for authority, thus soccer was introduced as an official sport for youth in school. Now, according to a 2013 poll by Repucom, 83% of Nigerians are interested in soccer and 65% play the sport. For a country that is both dazzling in its wealth yet simultaneously devastating in its poverty, soccer is the momentary key to freedom from any cares.

My dad started playing at the age of six with other kids in his village, and when he got to primary school, his teachers noticed he had an above average knack for the sport. He was recruited to play on a few different local teams, then he eventually was recruited to play for the NEPA Lagos F.C. team and officially became a professional soccer player. However, his dreams of joining the national team died when he moved to Oklahoma for college. Soccer wasn’t a popular sport in the state, and he didn’t have the resources to know where to go where it was. When he moved to California, Afriscope was his savior, and although they don’t compete anymore, he continues to play with the team to this day.

By the time I got to middle school, I had transferred schools four times around San Jose and like most kids, I was just looking for a way to fit in. I was pretty athletic and learned quickly that sports were my one-way ticket to appearing the slightest bit cool. I was a kickballing-softball-throwing-swimming-ice-skating-gymnastics twirling-basketball dribbling-sprinting-skateboarding-footballing powerhouse. But, ironically, I avoided soccer like the plague.

While it can be a fleeting antidote to the everyday struggle of life, it is the opportunity to be part of something global — and as my dad said, it’s fun.

It was almost too obvious — of course I should play soccer, but I didn’t want to let my dad down. I was terrified of not living up to my preconceived notion of what his expectations might be. All these Saturdays at the field with Afriscope, just for me to try out for the seventh grade team and not make the cut? It wasn’t happening.

As I overanalyzed how I could uphold his legacy, my dad gave me simple advice, “Just have fun.”

I made the team, and we began a new ritual. We’d put on our tennis shoes. I’d pack my cleats and make sure I had all of my gear in the car. He would drive me to my games and watched intently from the sidelines as I tried my best on the field. Some games I played center midfield while others I played goalkeeper. Not a lot of goals happened on the middle school field, so it was more like hanging out in the net while 11-year-olds kicked a ball around somewhere midfield, but my dad was always present.

For Nigerians, soccer is the source of glowing pride as it's one of the activities our country excels at on a worldwide level. While it can be a fleeting antidote to the everyday struggle of life, it is the opportunity to be part of something global — and as my dad said, it’s fun.

For us, soccer was our bond. And although my soccer career ended after just one season, as my mom figured math and science programs were a better use of my time (and surprise, I ended up not being that great of a player), my dad and I still make sure to watch the Nigerian team.

Although I’m not running up and down the field alongside him anymore, my dad continues to play. I asked him if he’ll ever stop. He said, “Once I stop walking, I’ll stop playing soccer.” Fair enough.