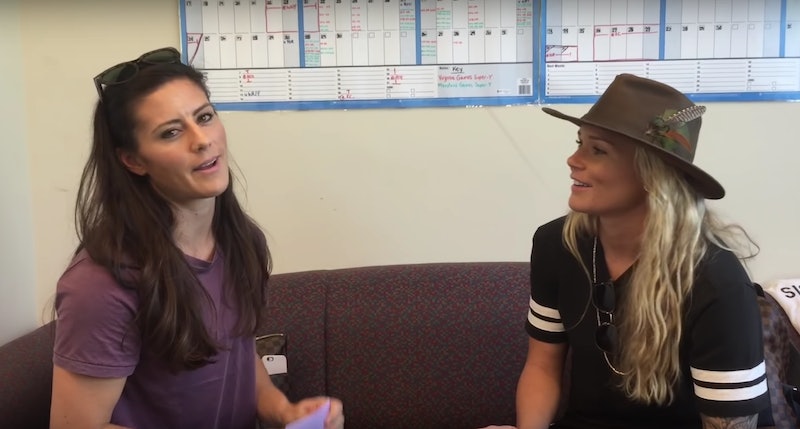 In the first public confirmation of their relationship, soccer stars Ali Krieger and Ashlyn Harris announced Wednesday that they've been engaged since September. The couple tells People that they hit it off immediately almost almost a decade ago while playing for the U.S. National Team, and will be getting married later in the year.

“We became really close friends, and we just hung out, we clicked, and we had so much in common,” Harris tells People of when she met Krieger in 2010. “We always sat next to each other on the bus and on flights, and we kind of just talked about our dreams and our hopes and what we wanted to do one day when we grew up. Because at the time, we were kids.”

Harris said that she was attracted to Krieger's independence and assertiveness — and also, her eyes.

“It was her big, beautiful brown eyes,” she tells the magazine. “She has these unbelievable tiger eyes. I just felt like every time she was talking, I wasn’t even paying attention to what she was saying.”

Fans have long speculated that the two athletes might be romantically involved, dubbing the duo "Krashlyn" and making video tributes to them. But the couple tells People that they kept their relationship a secret to avoid becoming a distraction from their team and sport.

"We wanted to be professional and make sure that we showed up every day and did our job and it wasn’t just because we were together, it was because we love what we do, and we’re really good at what we do,” Krieger tells People. “And that was most important for us.”

Nevertheless, Harris acknowledged that it felt like a weight had been lifted after the two confirmed that they're an item.

"We became more and more confident within and ourselves and then clearly within our relationship,” she says. “We were like, now is the right time … and I feel like it’s a massive weight off of my shoulders. Finally, after all these years, I just feel like I don’t have to hide anything or feel like I’m not living up to the community I’m in.”

Krieger says that Harris proposed to her after the last game of the season, when the two were having a picnic on Clearwater Beach. After the two took a selfie together, Harris surprised her soon-to-be-fiancée with a ring.

“It was just us and this beautiful scenery, and I was just like...she was making me laugh, she wanted me to take pictures, and here I am," Harris says. "This is what I’m gonna be doing the rest of my life. It just all froze and I was like, ‘this is it.’"

In Krieger's estimation, it was "a really good time" to propose.

"I felt really on the same page with her, and really excited about our future and talking about our future plans with kids, and family, and things like that,” Krieger tells People. “It just was a really good time. I was really surprised because it just seemed like another weekend getaway for us. I wasn’t really thinking about it at all!”