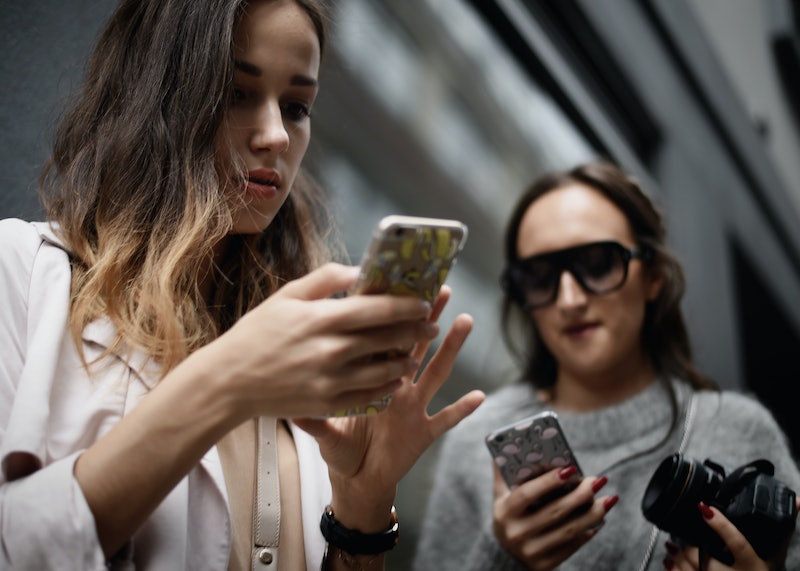 Things I have bought after seeing them in my Instagram feed include a blanket shaped like a mermaid tail, a toothbrush, eyebrow enhancer, and workout headbands. And, apparently I'm not the only one who scrolls and shops. A new survey from Propeller Research on behalf of Varo Money found that social media makes millennials spend more money. The survey revealed that 47 percent of millennials spend up to four hours a day scrolling, and that leads to 38 percent of scrollers purchasing something after seeing it on social media.

What's more, 41 percent of participants said FOMO played a factor in their social shopping habits, and they purchased something via social to feel better about their own lives. According to Dr. Susan Weinschenk writing for Psychology Today, social shopping is so satisfying because the anticipation of waiting for an online order to arrive actually activates dopamine in your brain.

"When you place an order for a product online, you don’t get the product right away. You have to wait. And in the waiting is anticipation," she explained. A report from RazorFish backs this up: it revealed that up to 82 percent of online shoppers said they were more excited waiting for an online order to arrive than they were when they shopped at a brick-and-mortar store.

If you think you're immune to falling prey to these virtual influences, another study published in the Journal of Consumer Research found that heavy social-media users have less self-control than those who spend less time scrolling. What's more, those who can't slow their scroll are more likely to engage in other habit-forming behaviors, have lower credit scores, and more credit card debt than people who don't use social media as much.

One of the reasons you might be more likely to impulsively purchase something on social media is because it's easy. "The heavy downside is that social media purchases can be impulse purchases," financial planner Abel Soares told Varo. With many online retailers accepting Apple Pay, Venmo, or PayPal, one-tap shopping is often faster than the time it takes you to come up with a good caption for your own Instagram post. If you actually have to type your credit card number into your phone and create an account, you're more likely to abandon your online cart.

If you want to curb your social spending, Varo recommends that you make it more difficult for yourself to complete purchases. "Just as digital brands have made it easier than ever to purchase something, you can make it really hard for yourself to do it — delete your connected credit card so that every time you want to make a purchase you have to find your credit card," Varo suggested on its blog. You can also log in to your bank online and see where you're spending the most money.

If you're horrified that you've committed to eleventy-million vitamin, makeup, and protein powder subscriptions after seeing them on social, you can take back your life and cancel them. What's more, think it through before you use a referral code or load up your Amazon cart with things you don't need just to get that free one-day shipping when you spend $35. If you see a coupon on social that allows you to save $75 on a $200 leather jacket, and you already have two leather jackets, you probably don't need another one.

So, what happened to all of the things I bought on Instagram? The mermaid blanket is now a cat bed, and I've long since abandoned using the other products because they ended up being kind of meh. The lesson? Take a beat before you buy and save that money for something you actually want.